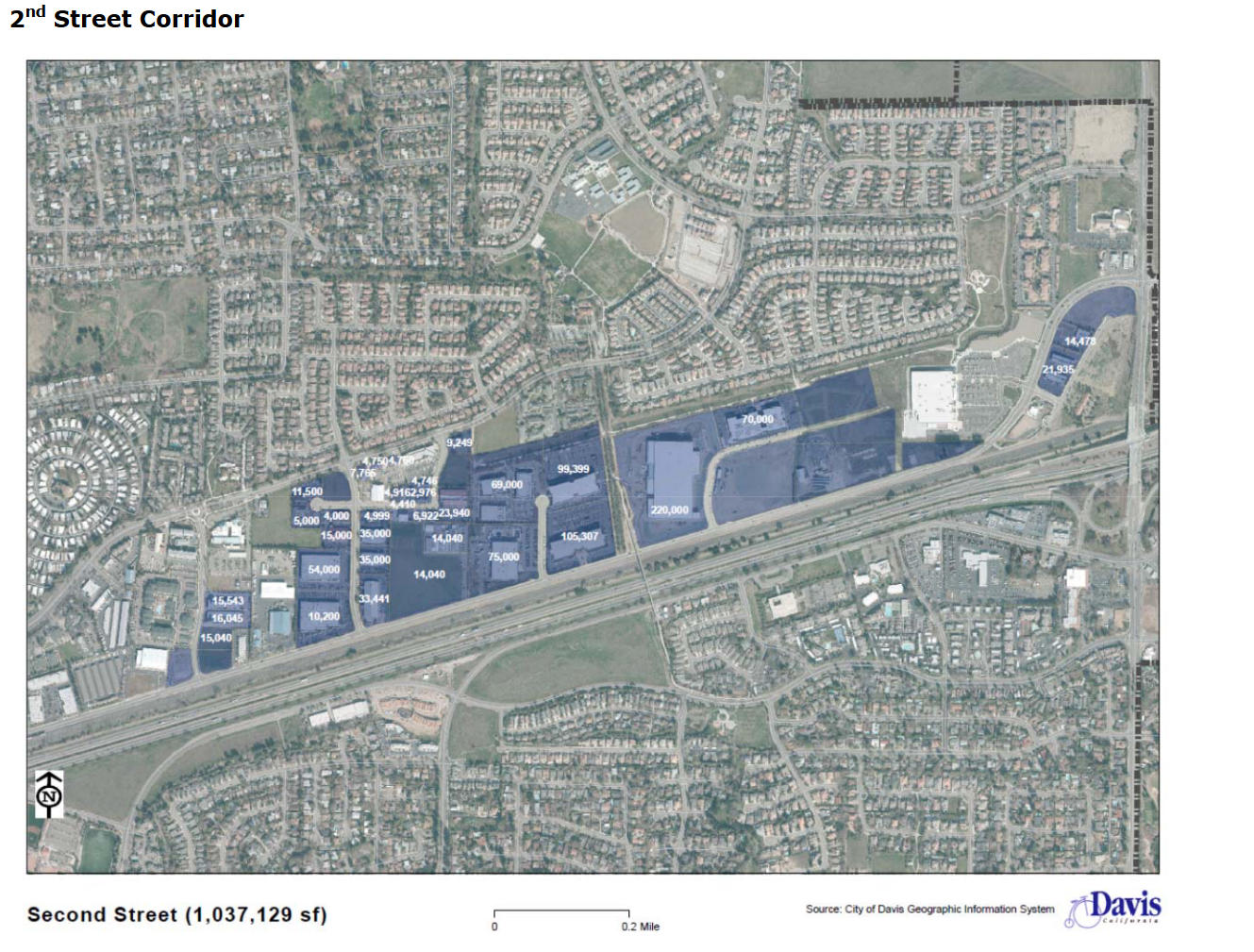 Davis, CA – A month or so ago one of the Vanguard commenters asked the question as to why the existing commercial development along Second Street hadn’t fixed the city’s fiscal problems.  The answer probably should be obvious—the city is anywhere between $7 and $10 million per year in the hole (maybe more depending on whom you ask) and the development along Second Street, while helpful, is not sufficient to bridge that gap (indeed, even with that development, there remains a huge gap).

When EPS (Economic & Planning Systems, Inc.) analyzed development prototypes in Davis, they looked at existing “tech clusters” on the 2nd Street Corridor and Interland, which is now University Research Park.

In particular, it looked at flex-R&D/Office structures.

They write, “Schilling Robotics’ main facility and the DMG Mori Digital Technology Lab, both in the Second Street Corridor, as well as the Marrone facility in Interland URP are classic examples, showing some similarities to office but having larger workstations, more internal equipment, and often roll-up doors to facilitate equipment and materials delivery. Because of the nature of activity involving larger work stations and laboratory facilities, employment density usually is lower than office uses. In many cases, these operations generate substantial B2B transactions resulting in sales and use tax receipts for their host Jurisdictions.”

They noted the following key prototypes for Davis:

But we asked the question—how much square footage is there along Second Street?  Starting with the 2015 EPS report, they added in the more recent buildings to arrive at a number just over one million square feet.

As of 2015 when EPS ran the initial analysis for MRIC (Mace Ranch Innovation Center) there was roughly 1.03 million SF along Second Street.  There has been some construction since then—Resonetics on Cantrill, plus a couple of warehouses.  And then there is the Marriott Residence Inn and a few additionally built out Target pad buildings.

Even with Target, Mori Seiki, Schilling Robotics, the Marriott and two cannabis dispensaries, we are looking at a square footage remarkably similar to DiSC and we know from the EPS projections at DiSC that’s bringing in about $4 million per year in revenue at build out.

If you drive along Second Street you can generally see why there isn’t more square footage.  First, there is a lot of open space.  You have the huge swath of the Superfund area from Frontier Fertilizer.  There is also the dog park with its open space.

Second, some of the land is owned by the university and thus off the tax rolls for the city.  For example, the greenhouse site is owned by the UC Regents but being sold to the USDA.  The USDA will be putting additional research facilities there.

The only buildable spot on the corridor at the moment is the spot in front of Mori Seiki—we should have news about that spot relatively soon.

Third, it’s not very dense to begin with.  Most buildings are spread out and they are one or two stories.

Further, as EPS notes, “The Buzz Oates properties in the 2nd Street Corridor and Interland URP always have been seen as the ‘overflow’ for UC Davis, and there is very limited available supply with little if any remaining large floor plate spaces available.”

This is a critical point that Tim Keller makes in his recent column.

As we know from previous analysis, this is a problem overall in the city with just 124 acres of private vacant commercial land in the city.  And once you take into account the availability of that land, that number quickly gets cut in half.

For instance, on Second Street, the Frontier Fertilizer site leaves just a few spots for development along the corridor.

Not only is there limited remaining space, but the density of the Second Street corridor is also fairly low.  In fact, the FAR of this area is only 0.4.  That’s well below the 0.8 to 1.0 FAR that DiSC is projected to be.

The EPS report sees the innovation center at Mace as being an addition to the existing Second Street Corridor.

It notes, “While Davis has a solid track record of incrementally growing a tech sector concentrated in two parts of the City (Interland URP and the 2nd Street Corridor), the Innovation Center proposals seek to provide more compelling urban design, use mixes, and levels of investment than have been traditionally realized in Davis.”

However, a straight continuation of the Second Street development patterns, which would result in an FAR of 0.38, while consistent with the existing development along Second Street, would “not provide the end-state concentration of uses contributing to a dynamic environment.”

In short, while the Second Street Corridor is a huge boost to the city, overall it represents about the same size of development that would be concentrated at DiSC in much greater density.  Moreover, it is, with the exception of the one key spot, exhausted its ability to expand.

While the city was not able to provide the precise tax take of the Second Street Corridor, we know that DiSC 2022 at just over 1 million square feet is projected at buildout to generate about $3.9 million net.  Second Street is probably comparable to that—give or take.  To really close the funding gap, the city probably needs the capacity for about 3 million square feet of R&D space.  DiSC 2022 only gets them about one-third of the way there.

Share:
Tags:2nd Street CorridorEconomic DevelopmentTech Cluster
Previous : Commentary: Takeaways from the DA Debate
Next : 8,000 nurses who striked against Sutter Health in NorCal get barred from working for 5 days

31 thoughts on “My View: 2nd Street Corridor’s Impact City Finances – But the Numbers Tell the Story of Why More Is Needed”