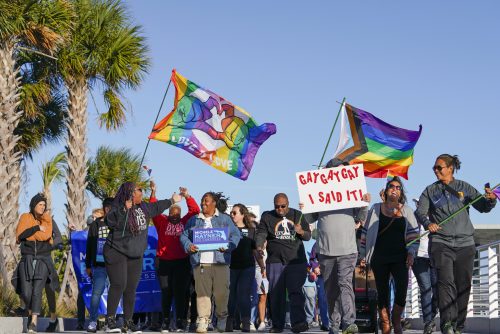 In the past couple of months, several states have introduced an onslaught of anti-LGBTQ+ bills, with over 300 in consideration at the time of this article’s publication. Florida’s House Bill 1557, also called the “Don’t Say Gay or Trans Bill,” puts a limit on freedom of speech. The bill prohibits discussion of sexuality or gender identity in classrooms from kindergarten to third grade.

This anti-LGBTQ+ bill sparked much controversy within schools across the country. Jack Petocz, a junior at Flagler Palm Coast High School in Florida, helped organize protests at his school and across the state. At his high school, students received an allotted 15 minutes to protest. However, students reported that during the 15-minute walkout, the administration threatened them with discipline and attempted to confiscate the pride flags that Petocz handed out. Petrocz was indefinitely suspended for being “disrespectful and openly advocating against staff.” He has not been deterred by this punishment, tweeting, “We won’t stand for the diminishing of our perspectives within educational institutions. Queer students deserve to be their authentic selves openly.”
Students staged a protest at Citi Field, a baseball stadium in New York City, against the ability of the state to determine what is “age-appropriate,” which is a phrase people use to marginalize LGBTQ+ communities. Students chanted “We say gay” at the LGBTQ Network rally, hoping their voices would reach Florida Governor Ron DeSantis. “It’s really crazy that people can tell you what not to say, especially when it has such an effect on a whole community,” one student told ABC 7 News.

Will Larkins was one of the many students in California that hosted Don’t Say Gay walkouts. They said that the protest was “beautiful,” getting “neutral people and allies [to become] active advocates who [will] fight for [LGBTQ+ students].” Larkins also spoke out against the bill in front of a Florida Senate committee to get their message through.

Despite wide protest, the Florida bill became law on March 28, and since then, over a dozen other states have followed in Florida’s footsteps. Tennessee and Oklahoma are two states that proposed bills banning LGBTQ+ reading material in schools, while Missouri, Indiana, and Kentucky aimed to ban “gender and sexual diversity training.” Many other states proposed bills with similar language that people say would alienate LGBTQ+ students and their families.

Governor DeSantis defended the Florida bill’s signing, saying its purpose was to“make sure that parents can send their kids to school to get an education, not an indoctrination.”  However, Florida teacher Paula Stephens worries about isolating students with two moms or two dads, who would be unable to discuss their family in the classroom. Kathryn Poe of Equality Ohio told NPR that states are essentially telling LGBTQ+ students that they “don’t exist and that they don’t matter and effectively erase them from the classroom.” A new Trevor Project survey shows that LGBTQ+ youth are harmed by these bills, as 85% of transgender or gender non-binary youth in the United States say that their mental health has been negatively affected by legislative attacks. Students and teachers alike agree that what is at stake here is not indoctrination but the well-being of LGBTQ+ students.

Kate Anstett is a student at the University of California, Berkeley, and a writer for the Vanguard’s Social Justice Desk