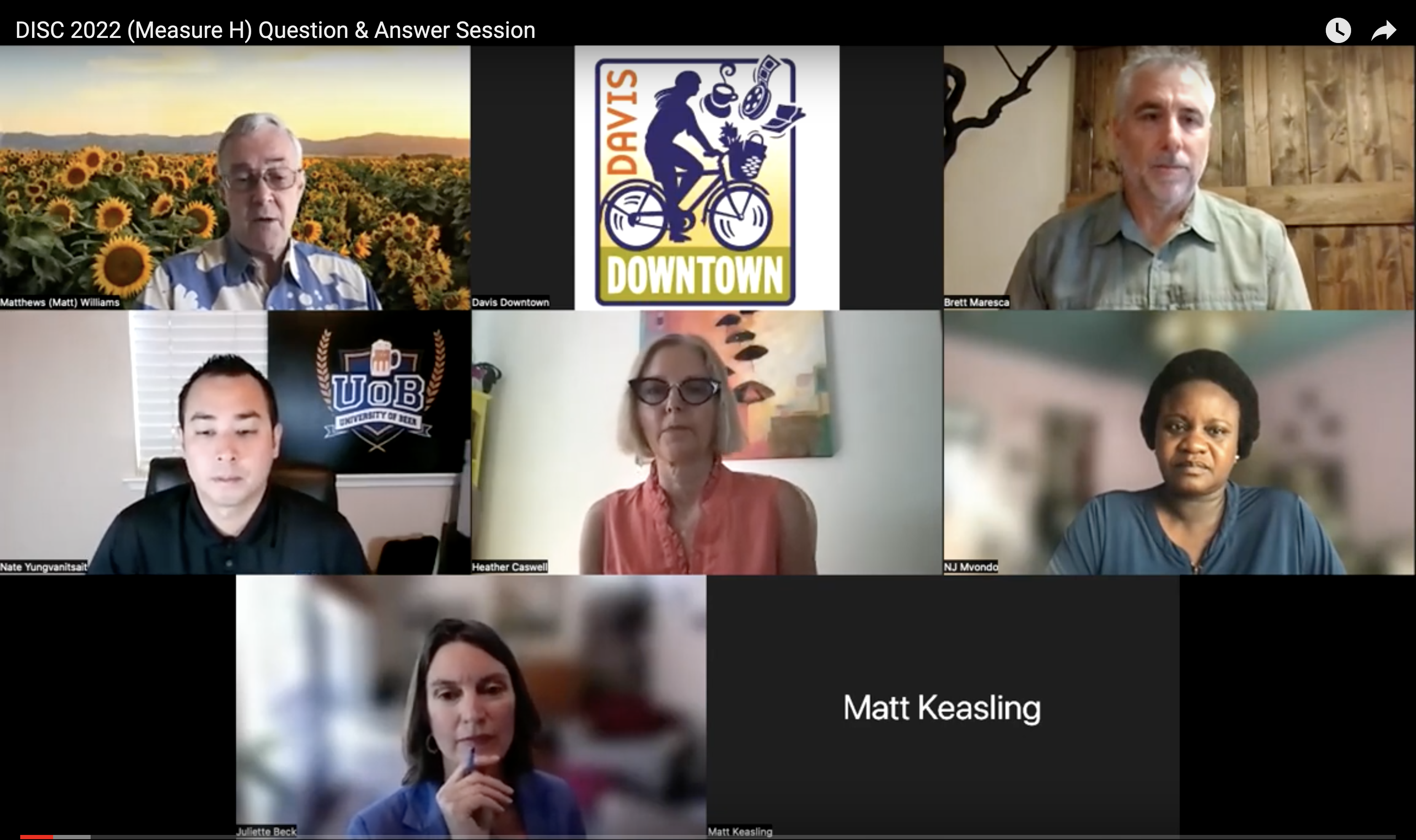 The opening arguments were made by Matt Williams and Matt Keasling.

According to Matt Williams, “there are 10 good reasons to vote No on H.  It starts with traffic. There are more than 1200 additional daily car trips from the project reported in the EIR. The EIR says significant and unavoidable delays.  And all of that makes the Mace Mess, South of I-80, look like a stroll in the park.”

He added, “Further, the EIR does not include the additional planned development projects, Palomino Place, which is currently at the planning department being reviewed…  Shriner’s is also in planning.”

In addition, he argued, “there are no firm, and I emphasize the word firm plans to mitigate the traffic. There are suggestions of 23 improvements along the mace corridor, but many of them, if not all of them are subject to study, and we won’t know what they’re going to be until they’re studied further. The commitments to fund them are often only for the initial funding or design funding and with no firm completion dates in the overall project plan.  Figuring it out later is

Williams further stated, “Yes on H has said the independent study by the traffic consultant traffic engineers, they are professionals. So they said the average intersection delay is reported in seconds per vehicle for all approaches. And that overall you would see traffic improve with the project on the mace corridor.”

He continued, “Well, the reality is that when you look at all four directions and you think about the current problems on the Mace Corridor, the problems are all southbound.”

He explained, “There are no problems northbound, and the east and westbound are not a problem. So what happens is the improvements such as adding two northbound lanes on Mace north of Alhambra will improve northbound traffic, which is already okay. And that improvement overweighs the serious problems that exist southbound.”

Williams argued that the 23 improvements “doesn’t deal with the elephant in the room, which is the I-80 eastbound on ramp—the ramp meter there lets one car on every 15 seconds when it’s turned on, that’s four cars a minute. If you figure two lanes, that’s eight cars a minute.  When you look at the traffic study, it says they’re gonna add 156 additional cars turning in out of the project onto southbound Mace at Alhambra and another 243, turning south out of County Route 32, that’s 400 additional cars.”

He argues, “If you figure there’s eight cars per minute, that’s 50 minutes of additional traffic. That’s going to be added.”

Williams further argued, “The project will make this housing shortage in Davis worse. This says it will bring just under 2,500 new jobs to Davis, but only provide 460 residents.  That means that the current Davis housing shortage will be worse by 2000 people looking for jobs.  The financial analysis the city put together projects only 187 of the project residents, will be assumed to work on site.”

He explained, “If you figure the average small retailer in downtown has about 800 square feet, give or take, that’s a hundred small retail shops that they’re talking about adding to DiSC, which is going to act as a gravitational pull of customers away from downtown.”

Matt Keasling explained the Yes side of the argument.  He said, “We’ve argued that it will combat climate change, that it will create a carbon-free community using a hundred percent renewable energy, deliver more housing and affordable housing for the next generation of Davisites.  That it will restore and improve native habitats and permanently preserve farmland.

“And at unprecedented scale, that it’ll create STEM jobs and internship opportunities. It will expand the greenbelt systems walking path, and create safe connections. Yes on H builds upon the amazing research taking place at UC Davis and allows businesses generated by that research to grow here locally.”

Further, he argued, “I think more important for Downtown Davis, Yes on H delivers $2 million for the south Davis library and community center. It generates conservatively $3.6 million annually for the city’s general fund. And it creates an estimated $2.3 million in ADA funds and $700,000 in taxes for Davis Joint Unified School District annually. These are major commitments that are going to be a benefit to the community as a whole.”

He said, “Yes on measure  H would approve the Davis Innovation and Sustainability Campus of 2022.”  He explained, “We are talking about 550,000 square feet of office, R &D and laboratory space, as well as 550,000 square feet of advanced manufacturing. These are not 800 square foot buildings or 3,500 square foot of office. This is major office, laboratory and manufacturing, similar to what you see on Second Street adjacent to I, 80, where you have Schilling Robotics, where you have FMC just purchased a new facility and is intending to expand here locally in Davis, thanks to the applicants that are proposing this project.”

DiSC, he said, “will be an opportunity for the city of Davis to retain those jobs and grow those companies for the benefit of the entire economy.”

Keasling then started to address some of the criticisms of the project.

He said that “those points would be one that this is greenwashing; two, that somehow the project will have a drain on downtown and the downtown businesses and economy, and three that the traffic is unmitigated with no firm commitments.”

He started with “greenwashing.”

He said, “This project that you see before you today has made commitments to energy sustainability, unlike any that I’ve ever seen, unlike any that we can be shown an example of in the state of California. Every structure is required to have photovoltaics placed on them, is required to utilize 100% renewable energy, meaning all of the energy that we don’t create on the site we purchase from VCEs ultra green program. Meaning every bit of electricity that’s utilized onsite is from a sustainable source. In addition to that, the buildings themselves are all electric. Our housing is all electric, no natural gas. Even commercial facilities have an all electric building shell, meaning that if they have a use inside that requires gas, say a laboratory that needs gas, they can have it, but for the heating and cooling of the systems, that is all electric using all renewables.”

He continued, “[W]e have just recently had UC Davis come out and say that the train heating and cooling system that would be a systems wide program that we would utilize on the site would have considerable benefits from sustainability and resulting in overall, uh, 12% reduction in, in carbon emissions from the site.”  Keasling added that “put simply this is the greenest facility of its type that would exist in the state, if not the nation and what an awesome opportunity for Davis to be an example for the rest of this state, to be an example for the rest of the country on how to do something like this and do it right, and do it in a way that’s sustainable.”

Next he addressed the issue of the drain on downtown.

Keasling explained, “There is a maximum of 80,000 square foot of retail on site with the largest retail permitted 25,000 square feet. There’s also firm commitment that this retail will only be intended to serve the needs of those living and working on site. Likely that means food, coffee childcare, perhaps a fitness center, right? Things that if I work on site and I’m busy at my desk, and I only have time to slip out for a second to buy a sandwich, and then I’m going back to my desk to keep working. That’s the type of users we have here so that people don’t have to hop in their cars and drive off site. It’s also an environmental benefit to have that, but in no way, is that competition for downtown retail, it is not intended to pull people into the site. It’s simply intended to provide convenient locations for those on site to have some amenities.  So they don’t have to leave every single day.”

He said, “So it’s not going to be actually a drain on downtown. In fact, what the analysis tells us is that at build out DiSC is gonna have approximately 2,400 residents that live there with annual compensation of 200 million. These are people that are going to be making good salaries and are gonna be looking for places to spend that money.”

He mostly ran out of time, but addressed the issue of “unmitigated traffic” briefly.  He said, “I will say that the traffic is mitigated, the county board of supervisors and the council unanimously supported an MOU that not only states that we absolutely will build all these improvements, we will build them concurrent with the project. And the traffic analysis shows that with these mitigations in place, we can adequately mitigate for our traffic impacts. And in fact, be an improvement on Mace Boulevard compared to what it would be in 10 years, if the project is not built.”

The next portion will address some of the Q&A portion of the forum.