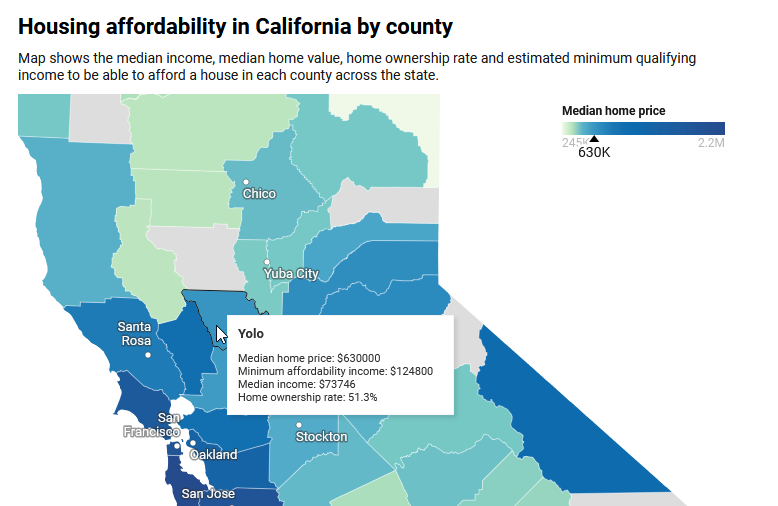 This week we have cited a number of studies to show that the housing crisis is multifaceted, it exists across the nation, and it is present both in the rental market for apartments as well as the housing market.

A new report shows that California’s home ownership rate is the second lowest in the nation behind New York, according to the US Census Bureau.  Indeed, from 2016 to 2020 (note this is before the pandemic even), around half the counties had ownership rates of less than 60 percent and in places like Los Angeles (46) and San Francisco (38) it was even worse.

Data from The California Association of Realtors and its quarterly housing affordability index shows the gap between home prices and the estimated income needed to purchase a median valued home.

I focused in on the data for Yolo County.  And remember, if anything this understates the severity of the problem because in Davis the problem is going to be far worse.

But countywide, the median home price was $630,000 over this time.  To understand just how much the point is understated, according to Zillow, the typical value of homes exceeds $900,000, so it’s nearly 50 percent higher than the value of homes in the county overall.

Davis doesn’t compare to Bay Area counties like San Francisco ($1.8 million), San Mateo ($2.2 million) or Santa Clara ($1.9 million) but Davis is a good deal higher than the average in California and far higher than the US national average of $368,000.

Obviously it depends on who you ask.  Those who already own homes in Davis and want to keep the town small and limit growth, may prefer a higher barrier to entry.

On the other hand, I am concerned that dynamics in the community are now out of kilter.  We have seen declining enrollment, the impact on the schools, an aging population base and more reliance on things like parcel taxes to fund our schools.

We should also be concerned with the jobs-housing balance and the fact that a huge percentage of employees at UC Davis cannot afford to live in Davis, but instead have to commute from areas where housing costs are less expensive.

For those concerned about climate change and the environment – while people have prioritized preservation of open space and agricultural land – on Davis’ periphery, demographic trends mean that farmland elsewhere is getting developed and people are having to commute from distance to get to work both people who work at UC Davis and people who live in Davis and have to rely on jobs to support their high costs of living.

Put that all together and it is not clear that the environment is actually overall benefitted from our current land use policies.

Share:
Tags:Home OwnershipHousing
Previous : My View: Gascón Explains Why Crackdown in the Tenderloin Won’t Work
Next : Reflecting on What ‘Returning to Normalcy’ Means after 2021-2022 COVID School Year

25 thoughts on “My View: The Housing Affordability Crisis Illustrated in New Report”