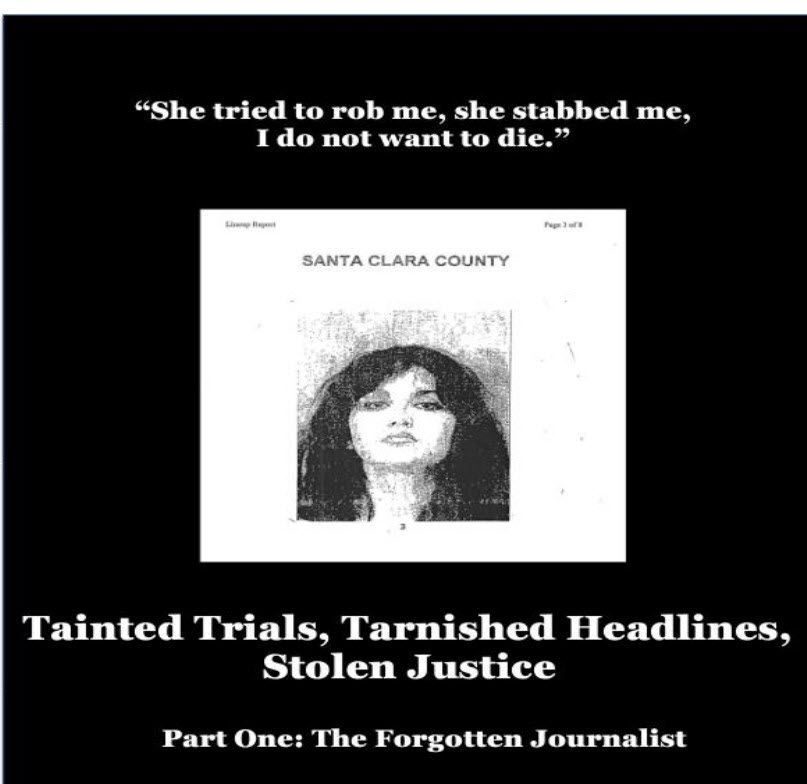 “She tried to rob, she stabbed me, I do not want to die,” Paul Gackle said before he collapsed on his neighbor’s porch, according to police reports.

“I feel like all I did was become a victim of a violent crime and now, all of a sudden, my life’s falling apart,” Gackle said.

But new information has come out that suggests Gackle wasn’t just the victim of a horrific assault, he was also the victim of a secretive, tight-knit circle of Santa Clara County Superior Court judges, lawyers, law enforcement officials, and reporters known as the Bench-Bar-Media-Police Committee (BBMP).

The history of the committee suggests that the government officials who organized and ran the group – and the “off-the-record” meetings – used it to influence local media and protect judges and law enforcement officials from scrutiny, scandal, and accountability.

Paul Gackle met Sydney Whalen outside a bar on July 21, 2017, but after he invited her into his home, she robbed and stabbed him 14 times, changing his life forever. He attempted to flee through the doorway, but she blocked him and stood in the doorway while continuing to stab him, according to police reports.

Ten days after the violent attack on Gackle, Whalen killed 44-year-old Daniel Torrez, a Hayward resident. The next day she was in Santa Cruz, where she was arrested for robbing and attacking someone with a hammer, according to local media.

On the same day as the hammer incident, August 1, 2017, the San Jose Mercury published their first warning to the public of the danger Whalen posed.

Before she attacked Gackle, Whalen was wanted by Santa Clara County for assault with a deadly weapon from a July 2016 incident. Then in May 2017 she was arrested for allegedly stealing a car and booked into the Santa Clara County Jail, police records show.

Despite Whalen’s extensive, and violent criminal history and arrests, she was not held in jail until she was arrested on the murder charge on August 1, 2017. Criminal justice experts say this resembles the leniency reserved for informants and persons with a special relationship with law enforcement.

Ultimately, Whalen was convicted and sent to prison by Alameda County. She is an inmate at Central California Women’s Facility and is eligible for parole in February 2031, according to the California Department of Corrections and Rehabilitation.

The explicit purpose of the Santa Clara DA victim’s services unit is to help people in Gackle’s situation. Instead it denied Gackle these services for the next four years.

Gackle went back to work less than a month after being attacked.

According to court documents, Gackle wanted to go on disability, but his sports editor, Bud Geracie, told him he would lose his beat if he didn’t begin reporting on the San Jose Sharks at the beginning of the season, which began the first week of October.

Gackle said the first person that came to see him at the hospital was Geracie, but it would be over a year before the Mercury reported on Whalen’s arrest for stabbing Paul.

When that article finally came out, Gackle spoke to Mercury editor Bert Robinson about his frustration with the article leaving out the fact that the Santa Clara DA, Jeff Rosen, had offered Whalen a plea deal which allowed for her release, nine days before attacking Paul.

“By going behind my back and going through Robert [Salonga] and Bert [Robinson], Jeff Rosen guaranteed that the information would be released to the public in a way that was beneficial to him,” Gackle said according to court records.

The Associated Press reported on Whalen’s extensive violent history in Santa Clara County and that the Santa Clara DA’s office confirmed Whalen had been charged with attempted murder, first-degree robbery and assault with a deadly weapon.

“Whalen has an extensive history of arrests and convictions in Santa Clara County, with at least 18 criminal cases going back to 2013, primarily involving drug offenses but also including assault with a deadly weapon,” the article said.

Rosen also refused to tell Paul the identity of his attacker for over a year and withheld information about the previous violent crimes that she committed,

despite Gackle specifically and repeatedly requesting that information.

This led Gackle to feel ignored, hopeless and violated by Rosen, according to his victim advocate. Out of justifiable frustration, he started criticizing the DA for Marsy’s Law violations.

Marsy’s Law was intended to protect crime victims from being re-traumatized while their cases move through the courts.

Gackle struggled with trauma for years after the attack, trauma that prompted him to go out on disability leave in May 2019. In October, when he expressed his concerns about returning to work while still suffering from the trauma of his attack, the Mercury fired him.

On the fourth anniversary of Gackle’s attack, July 2021, Gackle received a phone call from his California Victim Compensation Board (CalVCB) case manager who told him his claim was denied.

After struggling to receive victim’s compensation, Gackle reached out to victim advocates at Mothers Against Murder, (MAM) to help him get victim compensation.

False information on the employment verification that was signed by Karen Austin, Senior HR Director at the Mercury, caused CalVCB to consider denying Gackle’s wage loss, according to a declaration by his victim’s advocate.

Gackle’s victim’s advocate with MAM, Margaret Petros, gave the CalVCB evidence that he was fired by the Mercury due to the trauma he suffered in the aftermath of the violent attack on him, and that he did not quit without notice as Austin had incorrectly certified.

Rosen appears to have retaliated against Gackle when his office impeded his access to State Victim’s Compensation.

Since 2009, amounts and promptness of victim compensation have decreased.

Once Rosen became District Attorney, the amount of money paid has declined by roughly 75 percent, and the number of victims gradually declined by over 50 percent.

Compounding the cruelty of the attack, his employer requested a restraining order against Gackle.

“[Gackle’s] pleas for help were ignored and when he escalated his persistence to stand up for his rights, he was retaliated against by the Santa Clara DA and his employer, the San Jose Mercury,” Petros stated in a declaration opposing the granting of a restraining order against Gackle.

After being let down by the Mercury’s reporting on his story, and denied victim’s services by the DA’s office, Gackle began to feel ignored, hopeless and violated, according to court records.

This led Gackle to start criticizing Rosen’s office for Marsy’s Law violations and the Mercury on Twitter.

“What I’ve observed now, what I think is a pattern of the Mercury News providing very favorable coverage to Jeff Rosen and omitting stories that could be damaging to his candidacy,” Gackle said.

In July 2021, while Salonga was covering the campaign launch of Sajid Kahn as a candidate for Santa Clara County district attorney, Gackle confronted the reporter about his coverage of the attack on Gackle. Gackle yelled at Salonga until event organizer and public defender Carlie Ware intervened. That’s when Gackle sarcastically said to Ware, “But I haven’t even punched him yet.”

A month after the rally, the San Jose Spotlight published an article about Gackle’s story.

“They didn’t even inform me of Marsy’s Law,” Gackle told San José Spotlight—another benefit he had a right to under the statute. “I believe that they play very loose with victim’s rights, because most victims are people who aren’t very empowered, and we just don’t know about these rights.”

The interaction at the campaign event, Gackle’s criticism of the Mercury on Twitter and statements made by Mercury editor Robinson were the alleged basis of the restraining order the Mercury sought, as Mercury attorneys filed a Workplace Violence order against Gackle two years after they fired him.

During the trial for the Mercury’s restraining order request against Gackle, Judge Carol Overton disclosed a potential conflict of interest which was her being a former chair of the Bench-Bar-Media-Police Committee, whose existence had previously been concealed.

Judge Overton took testimony from Mercury editor Bert Robinson, and reporter Robert Salonga, who both were represented by the Sheppard Mullin law firm.

Judge Overton, Bert Robinson and Jeff Rosen are all BBMP self-styled “Justice Partners,” and Robert Salonga had moderated the guest panel at a 2016 BBMP meeting.

According to the court-produced records, when requesting payment for food at committee meetings and dinners, the clandestine group referred to themselves as “Justice Partners.”

Overton heard testimony from Gackle who described the trauma Whalen’s attack had had on his physical and emotional health.

Gackle also noted that the granting of the Mercury’s request to restrain him from all public spaces where Mercury reporters could be present would permanently ruin Gackle’s career as a local journalist. In addition, such a broad prior restraint is highly questionable under the First Amendment, according to open government experts.

Nonetheless, Judge Overton ruled in favor of the Mercury, granting the request.

Once the existence of the BBMP was disclosed, a public records request was made by investigative reporter Susan Bassi. Bassi requested all records related to the BBMP held by the court.

The initial request by Bassi was ignored. A second request by a male journalist resulted in the records being released over a six month period, even though public records law requires records be provided in a shorter time frame.

The records revealed that the BBMP was a secret, “members only” committee that existed for over 30 years.

It holds meetings at Three Flames Restaurant five times a year with topics that have a cross-appeal between the “Justice Partners,” which are selected: judges, lawyers, local media, and law enforcement, according to documents obtained through the public records request.

“BBMP strives to provide an off-the-record forum for full and frank presentations and, through that means, a meaningful mechanism for exchanging views, concerns, and ideas among the various disciplines composing its membership.”

Judge Overton was asked why she decided to disclose the BBMP and whether the meetings were open to the public. A spokesperson for the court via email said it had no comment.

Gackle confronting Salonga about the pattern of the Mercury News providing favorable coverage to Jeff Rosen and omitting stories that could be damaging to his candidacy is much more plausible given the fact that BBMP meetings were not publicly noticed and did not invite other local attorneys or journalists to the meetings.

The San Jose Mercury’s relationship to other “Justice Partners” seems to have led to a pattern of access journalism which has left many important stories to go untold.

Mercury reporter Tracey Kaplan became so enamored with her access to the judges who ran the group that she volunteered to research venues for group meetings in 2017.

Attorneys with Sheppard Mullin, representing the Mercury in court, did not disclose their participation in the BBMP to Gackle, raising the question of whether they had an unfair advantage and an apparent strong social connection with Judge Overton, who granted the restraining order.

Hundreds of documents related to the BBMP and its Justice Partners were obtained through a public records request that took the Santa Clara County clerk months to fulfill.

Judge Partners participation in BBMP raises the question of whether these partners have access to judges and individuals in powerful positions as well as newsworthy information giving an unfair advantage to its members over their professional peers who were never invited.

This is a rolling investigation into “off-the-record” BBMP meetings where “Justice Partners” appear to influence local media, silence victims, protect judges and law enforcement officials from scrutiny, scandal, and accountability.