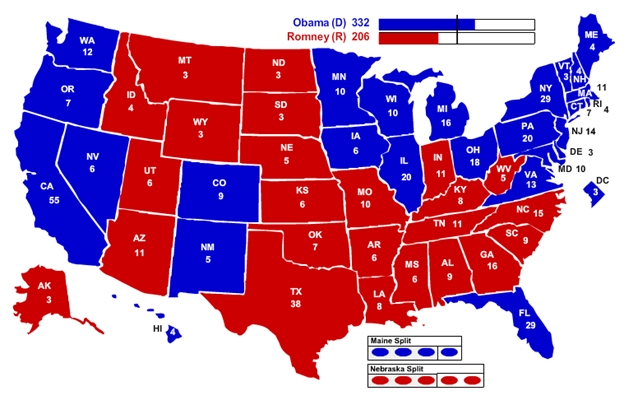 Column Right – Pundits on the left are already singing the song of Republican demise unless the GOP migrates more to their worldview.

I say “whoa Nellie” on that tune.  The rhythm is off, and the melody stinks.

First, this election was still quite close as Presidential elections go… especially for a second-term election.  The popular vote difference was only 2.3% in Obama’s favor.  Obama only gained 92% of the votes he acquired in 2008 running against John McCain.  In this 2012 election he didn’t gain a single state and he lost Indiana.

The election was also quite divided.

Looking at the electoral map, it is quite obvious that the red state versus blue state division is as strong as ever.

But, back to the point the political-left is making about the GOP.

It is also true that the GOP made MANY mistakes that contributed to the lack of support from these groups.   The exception to this is probably the black voter group that would probably still vote 95% for Obama if he was stealing pies from their window sill.

But here is the real reason that Obama won and these groups supported him:  MONEY!

Yes people, the Republicans got beat by the very thing the left and liberal media likes to claim they love more than nature, children and puppies.   The Democrats beat the GOP with money… their own favorite possession!

Here are a few facts to help you understand this point.

But you say “so what, they both raised a ton of cash!”  Yes, that is true… but with a couple of big caveats.

One – Obama used his Pac and campaign money early during the Republic primary to attack Romney.  Romney, unfortunately, had to use his funds to combat other Republicans.  The GOP primary election was bruising and difficult and Romney, the rich guy, actually ran out of money.  This again benefited the Obama campaign as they waged one of the most negative attacking ad-wars in the history of modern Presidential elections.   The impact of this massive ad attack, combined with all the free advertising provided by the left media prone to regurgitation Democrat campaign talking points, was devastating to Romney’s image.  He wasn’t able to recover until the first debate where viewers could not believe this was the same guy they saw fully trashed on TV, print and radio over the previous months.

Two – And this is very important… the Obama campaign received millions of dollars worth of free labor from labor unions.  So why is this something worth including?  It is worth a lot frankly, because, other than the barrage of negative ads tarnishing Romney’s image, the main reason Obama won is that the Democrats had a fantastic ground game.  They accomplished something unheard of in modern Presidential politics… matching the record-setting voter turnout in a re-election campaign.  Those burly, but frisky, blue-collar Obama campaign workers on loan from their union masters who were salivating at the prospects of Democrat-sponsored paybacks of labor concessions and fat pensions… they did a fantastic job.  They had their pages of bulleted talking points (basically this… the GOP hates women, old people, Latinos, blacks, poor people and puppies), two pairs of tennis shoes for walking the beat knocking on doors, and the keys to a fleet of busses ready to drive all those reliable Obama supporters to the polling stations.

So there you have it… money, including the monetary value of an army of free union labor, won the election for Obama.

That is very ironic since money is the root of most of the political conflict today.  More precisely it is the money being spent by government way above and beyond the money received by government.

Romney has a lot of money, but he lost to campaign money while basing his campaign platform on reducing the government money spent and increasing the money people could earn with better job prospects.

The lesson we learned is that it will take even MORE money to win the election next time.

Share:
Previous : Claimants in Suit Against DJUSD May Lack Standing to Bring Action
Next : Breaking the Silence of Racism