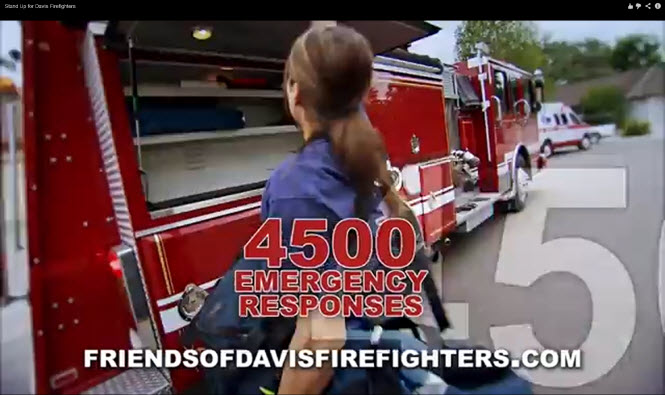 For the 2005-2009 MOU, the firefighters received an aggregate 36% pay increase just in salary.  That did not include benefit increases – the 3% at 50 that would make for windfall retirement pensions – and other perks.  Not only was the increase unsustainable, it was unequal.  The police officers at the same time took a much more modest 17% increase, and most other bargaining units saw about a 15% increase.

The firefighters took advantage of several key things.  First, the city’s general fund budget was booming with double-digit revenue increases from property taxes for several years.  Second, somehow, city leaders managed to convince the public that, despite the real estate revenue boom, they city needed more revenue and got the public to approve a half-cent sales tax generating $3 million that would effectively go to the firefighters.

And third, the firefighters were vocal and organized.  For several years, they took out collections and bundled $100 contributions to ensure friendly faces on the city council.  And it worked.  From 2002 until 2008 – four elections – the firefighters succeeded in winning all but two elections.  Only Lamar Heystek in 2006 and Sue Greenwald in 2008 won without firefighter support.

But the economy collapsed, and a concerted effort by first the public and then the city council, and finally the city management itself, changed things.  By 2012, there were no remaining members on council that were overtly supported by fire.  Fire has found a consistent ally in Lucas Frerichs  and a periodic one in Dan Wolk, who opposed staffing changes but also supported budget cuts and management changes.

Still, it is a perilous majority as the 3-2 vote on fire staffing showed.  One new fire-friendly councilmember, with the exit of Joe Krovoza and perhaps Dan Wolk, could drastically swing the balance of power in city government.

The firefighters, knowing that they lacked the votes on council to support the status quo, shifted strategies to mobilize the public.  First, in the winter and spring, they attempted to have community meetings and they went door to door with leaflets, and they followed that strategy up with pickets in front of city hall.

These tactics, however, have demonstrated that it is far more difficult to mobilize the public than it is to secure three votes on council through election and influence peddling.

In the meantime, while five of the seven city employee bargaining units have signed the new MOU taking concessions, there are still two holdouts – the firefighters and, for the second time in a row, DCEA (Davis City Employees Association).

While the city has made progress, there is a looming secondary budget deficit as the city now has to put money into infrastructure that had its maintenance deferred for the last six years or more.

With the uncertainty of the new council mix, there may be a better way to remove the influence of special interests and firefighter money on future councils.

The city council or citizens could put forward an initiative that would cap future total compensation increases to the percent increase in the general fund revenue.

It is easy to increase revenue during good times under the existing system, as everyone wants to reward the good work of city employees.  At the same time however, as the saga of DCEA and the firefighters – not to mention the entire 2009 MOU saga – show us, it is much harder to agree to terms during lean times.

No one wants to take concessions and receive less in the way of pay or benefits, but the cost of failing to agree leads to more future pain.

By having the increases capped by initiative takes away much of the uncertainty.  We would know that, during good times, we can increase pay and benefits, but the total compensation increase would not only be capped, it would be equalized, with no bargaining unit benefiting from lobbying and campaign contributions.

During tough times, concessions would be gained and city taxpayers would know that future budgets would be sustainable with limitations in growth and automated cuts.

In addition, there would be incentive for city employees to look for revenue enhancements, in the way of tax increases, special fees and also economic development.  The more revenue increases, the more city employees would get to share in the good times, as well as sacrificing jointly during lean times.

As a non-lawyer, I find it interesting to see if there is a way to legally tie future salary increases to increases in general fund revenues.

By making it a voter initiative, it would ensure that three votes on council could not overturn it.  Yes, the employee groups can lobby the public and campaign against this initiative, but, as we have seen, it is not clear that they have that kind of support in the community.