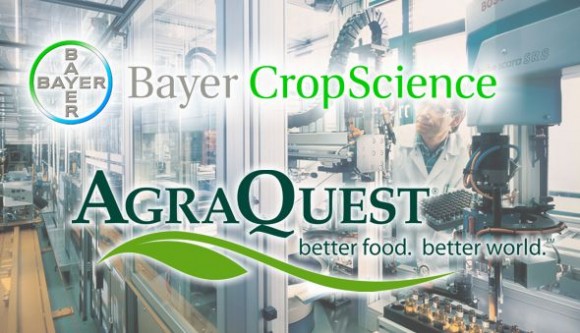 In August, Marrone Bio Innovations (MBII) went public, raising $65 Million, less costs, and establishing an initial market cap of $230M (it has since “popped” to almost $350M, as of this writing). At the same time Bayer announced its intention to relocate its Davis operations -acquired last year for $425M from AgraQuest – to new facilities in West Sacramento, consolidating global Bayer CropScience R&D for a major growth effort here.

There’s much to celebrate here in terms of economic development for our region and especially our AgTech/BioTech/CleanTech communities. But those two successes are linked and the story of that linkage is deeply inspirational and includes a dash of disappointment in the background that makes the flavor of success all the more interesting.

First, much of the credit for both events starts with Pam Marrone, a rare entrepreneur scientist with a big vision and the drive and perseverance to build not one but two successful companies based on that vision, through very challenging economic times.

Her vision: tapping the enormous breadth of micro-organism bio-chemistry to replace many chemical pesticides, herbicides and fungicides with more natural, equally effective products that don’t poison our environment. Thinking of Pam searching the globe for all these unusual “bugs” that evolved bio-chemical solutions to particular pests and diseases, and then turning them into products, reminds me of Thomas Edison trying out hundreds of filament alloys in different atmospheres, until he found one that wouldn’t burn out instantly – the original “light-bulb moment.”

Each success achieved at the cost of innumerable unsuccessful tries.  The future impact on the world barely hinted at by the initial success.

Credit for the IPO also goes to Pam Marrone’s team, including their lawyer Chuck Farman at Morrison-Foerster, CFO Don Glidewell, and their accounting team at Ernst & Young, who together shepherded the IPO through the SEC and onto the NASDAQ stage.

The $65M (including a “Green Shoe” overallotment, and minus fees) flows to the company to fuel further growth, and the $350M in market cap includes some nice chunks belonging to the founders and to early-stage investors, including some angel investors, small venture capital funds in our community, and even a little-known but large European strategic investment fund hidden in plain site (like many of our greatest resources) in Granite Bay.

Even though the largest financial beneficiaries are other funds located elsewhere, this is great news and a great milestone for our regional community of start-ups and early-stage investors, several of whom are board members at SARTA and members of the Sacramento Angels, who know first hand that early-stage investing is the ultimate exercise in delayed gratification.

Those with a long memory in our early-stage investment community remember back to late 2001 and early 2002, when the same team – Marrone, Glidewell, Farman – filed an S-1 with the SEC to take AgraQuest public. E&Y teams were also involved in both deals, although the lead people turned over, as audit firms are required to do periodically.

AgraQuest was the first iteration of Pam’s big vision, and it was poised to go public when the 9/11 attacks occurred. The subsequent effects of the dot com bubble bursting, the Enron scandal and Congress’s ham-handed response combined to slam the IPO window shut.

Needing money to fuel continued growth, Pam and her team eventually lost control of AgraQuest to investors who replaced management, and, through the kind of pay-to-play, full-ratchet, “cramdown” down-round which unfortunately characterized the last ten years, washed out most of the founders’ and early investors’ equity, while they sustained and grew the company until it was sold to Bayer last year for $425M.

AgraQuest wouldn’t have happened without Pam’s vision, leadership and dedication, and the fact that she and her team were pushed out and then largely excluded from the benefits of its ultimate success contributes a savory complexity to the flavor of this story. Pam’s dedication to her compelling vision despite that setback is the very definition of entrepreneurial perseverance, an inspiration to us all.

The last technology IPO in our community was DGMI in 2005, which also benefited local founders and a number of early-stage investors in our community. But the timing of launching our early stage technology communities (both SARTA and the SacAngels started around 2000) combined with a string of political blunders in Washington have been miserable.

Congress responded to Enron – an abuse-of-derivatives problem in a public energy company clothing – not by regulating derivatives which were left free to grow out of control until they contributed directly to the financial meltdown in 2008 – but by enacting Sarbannes-Oxley 404(b), which imposed multimillion dollar annual financial reporting and validation requirements on every public company, making going public too burdensome for early-stage companies.

Then the meltdown in 2008 interrupted the progress of most venture-backed companies for several years, destroying the luster of early-stage investing for large swaths of the economy, causing venture capital to essentially dry up for many sectors. Were it not for this series of macro events – the dot.com bubble, 9/11, Enron and SOX 404, and the financial meltdown – our regional economy would be a decade ahead in growing entrepreneurial industries.

The JOBS Act provides an exception to SOX 404 for emerging growth companies like Marrone, and MBII is likely to mark the start of a stream of such companies moving forward. This “liquidity event” for early-stage investors both puts fresh capital in their hands (after a 180-day lock-up period), and validates the investment model for other, newer early-stage investors to emulate.

There’s no question that the Bayer investment in West Sacramento to grow in our community on the foundation of the enterprise begun at AgraQuest is a bigger immediate economic event (estimated by SACTO at $127M per year) than the Marrone IPO, and there’s no denying the unpleasant aftertaste around the way the founders of AgraQuest who set the table for its later success were left behind during that bleak “lost decade” following 2001.

But there’s inspiration aplenty in Pam’s story of vision and leadership and, above all, perseverance on which to continue to build an entrepreneurial economy in our region. The obstacles and the delay in gratification makes the ultimate flavor of success all the more interesting, inspiring and enjoyable. Having two leading bio-pesticide companies here with strong reasons to compete vigorously for large global markets should be credited first to Pam Marrone and second to her teams.

May the success of the Marrone IPO ripple through our community, inspiring many entrepreneurs, their early-stage backers and a whole community of supporters to many future successes for the general good of the community and the world.

Cary Adams is CEO MedFORCE Accelerator, SARTA Board member and MedStart Chair.  Article originally appeared on the SARTA Blog.  SARTA is a not-for-profit 501(c)3 corporation founded in 2001, and focused on a nine-county region of Butte, El Dorado, Nevada, Placer, Sacramento, Solano, Sutter, Yolo and Yuba counties.  It focuses on the growth and development of the technology sector in the Sacramento region. It acts as the nexus that links technology leaders, entrepreneurs, investors, service providers, community organizations, and educational institutions.  SARTA executive director Meg Arnold spoke in Davis on Tuesday.

9 thoughts on “A Tale of Two Ventures: Pam Marrone and the Lost Decade”