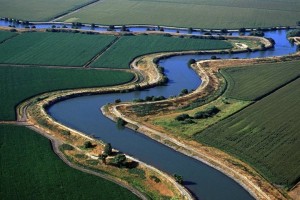 On Monday, state and federal officials announced the availability of a public draft Bay Delta Conservation Plan (BDCP) and an accompanying environmental review document. The BDCP includes a proposal to build large and expensive new water conveyance facilities in the Sacramento-San Joaquin Delta, the impacts of which will be purportedly offset by an ambitious regime of habitat restoration and other environmental measures intended to assist various threatened and endangered species.

The habitat restoration proposals are of particular significance for Yolo County, which include a proposal to create many thousands of acres of seasonal floodplain habitat in the Yolo Bypass. According to a release from Yolo County, “This proposal, described as ‘Conservation Measure 2,’ targets rich farmland and waterfowl habitat in the Yolo Bypass for increased flooding that could extend as late as April or May in some years. The measure seeks to create safe passage for salmon through the Yolo Bypass as mitigation for the main component of the BDCP; three massive new water intakes on the Sacramento River that feed an underground tunnel system carrying water to pumps in the south Delta.”

Congressman John Garamendi and State Senator Lois Wolk both spoke out against the plan.

“Thus far every analysis of the proposed twin tunnels and disruptive habitat restoration projects in the BDCP has shown the proposal fails to achieve the legally required goals of environmental restoration and reliable water,” Congressman Garamendi said in a statement. “Since there has been no substantive change in the purpose or fundamental design of the BDCP, it is hard to imagine how these documents change the fundamental fact that the whole BDCP is a $25 billion boondoggle that will lead to the destruction of the largest estuary on the West Coast of the Western Hemisphere.”

“This project still doesn’t create one gallon of new water, and it still doesn’t add one gallon of desperately needed storage for existing water. The BDCP remains a bad deal for California,” the Congressman added. “It’s time to stop the madness and fully consider alternatives, such as the NRDC’s [National Resources Defense Council] portfolio approach or the ‘Comprehensive Water Plan for All of California’ that I have proposed.”

“I continue to be concerned that the state has chosen to follow a path that will not solve either the state’s water supply or the Delta’s ecosystem challenges,” Senator Lois Wolk, a longtime champion of the Delta and local rights said in a statement.
“The cost for the twin tunnels continues to increase while the amount of water that can be safely diverted from the Delta continues to decrease,” she continued. “The BDCP pits region against region and relies upon huge ratepayer increases and taxpayer subsidies from those who would see little or no benefit in the urban areas while others in the Delta and Northern California would have their livelihoods destroyed. “

“Also, the price of the water delivered to agriculture would make it impossible for farming to continue in the Central Valley,” Senator Wolk added. “It’s time to put more effort into a viable alternative, a Plan B — a more affordable, less divisive and more achievable path forward.”

Yolo County officials also expressed concern about the local effects of Conservation Measure 2, which differs only slightly from a prior version released earlier in 2013.

“Conservation Measure 2 still holds the potential to fundamentally alter the Yolo Bypass as we know it today,” said Yolo County Supervisor Jim Provenza. “The Bypass is an important area for rice and other crops, with tens of thousands of acres of productive agriculture. You simply can’t flood the Bypass into the spring months and expect that agriculture will somehow get by unharmed.”

Concerned about such effects, the county retained UC Davis economists to complete a study entitled “Agricultural and Economic Impacts of Yolo Bypass Fish Habitat Proposals,” the county noted. They add, “The April 2013 study supports the concerns expressed by Supervisor Provenza. It determined that flooding the Yolo Bypass until mid-May would prevent the farming of rice and many other crops on affected lands. Harm to the Yolo County economy under that scenario could be significant, amounting to roughly $9 million in years when late flooding occurs.”

Yolo County Supervisor Matt Rexroad expressed similar concerns about Conservation Measure 2. “It is critical to limit the potential impacts of Conservation Measure 2 on farming in the Yolo Bypass.” Citing the nearly $1.4 million currently owed Yolo County in delinquent payments for state-owned lands in the Yolo Bypass Wildlife Area, Supervisor Rexroad said, “If the state decides every year for 13 years to ignore its own laws and shortchange our community, why would we expect that things will be different with the BDCP? We can’t hope to be made whole later on. We must work hard right now to protect agriculture and other existing uses in the Yolo Bypass. “

Supervisor Jim Provenza agreed. “We need a balanced solution. Agriculture in the Yolo Bypass creates habitat, supports the operation of the Wildlife Area, and limits the growth of vegetation that would otherwise interfere with flood protection. The BDCP simply has to respect and preserve these important features before it can have any chance of succeeding in Yolo County, or beyond.”

Supervisors Provenza and Rexroad represent the Yolo County Board of Supervisors in discussions with the state regarding the BDCP. Jim Provenza stated, “We appreciate the effort the state has made over the last couple of months to begin a serious discussion surrounding the concerns held by Yolo and other Delta counties. Progress has been made in some areas but we have a long way to go to assure that Yolo County’s economy, agriculture and way of life are protected should this project go forward.”

Share:
Previous : Vanguard Commentary: Impasse Does Not Go Far Enough
Next : Former Prosecutor Tests the System, Gets More Than He Bargained For