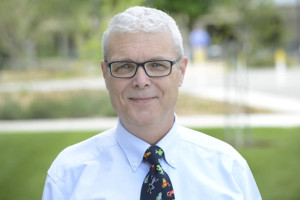 Poppenga filed as a candidate for one of the three school board seats with a four-year term. The election will be on Nov. 4.

“I’m looking forward to engaging the community as the campaign moves forward,” he told The Enterprise.

Poppenga is a professor of veterinary toxicology at UC Davis; he joined the faculty here in 2004. His career as a university educator, which began in 1987, includes six years at Michigan State University and 10 years at the University of Pennsylvania. He has held leadership positions in a number of professional organizations, including the American Veterinary Medical Association.

He grew up in Springfield, Ill., and did his doctoral studies at the University of Illinois, Urbana.

Poppenga and his wife Amy, who also is a UCD faculty member, have two daughters in the local schools — one entering the ninth grade, the other entering the seventh grade this fall.

Poppenga (rhymes with “bay”) recently participated in the Davis school district’s strategic planning process as a member of the Professional Development Action Team.

The following is from his press release in April in which he announced he would be running both for the appointment to the vacant school board seat and would seek election in November.

Bob Poppenga, a parent of two, an active parent volunteer, a veterinarian, and professor of veterinary toxicology at UC Davis, announced Tuesday that he will seek a seat on the Davis school board.

Poppenga indicated that he will be a candidate for appointment to the vacant seat and will also seek one of the open board seats available in the November general election.

Poppenga said that there will be many exciting opportunities in the next several years, but a number of significant challenges face the school district as well.   He sees short-term challenges with implementation of both the new common core curriculum and the recently adopted five-year strategic plan for the district.  Prioritizing the allocation of new monies from the state will require careful consideration with community input.  Opportunities include the development of a long overdue professional development system for teachers and staff, enhancement of partnerships with public and private groups to leverage limited district resources, and introduction of new technology to the classroom.  To take advantage of opportunities and to meet the challenges will require leadership, collaboration, good communication, and transparency.

“The availability of a high quality public education for all of our children is one of the cornerstones of our society.   A community like Davis, with its abundance of human resources and its educational focus, should be at the forefront of educational innovation and providing a world-class education for all our students with their diverse needs.  At the same time, it is critical for the District to be a good steward of taxpayer dollars to assure continued community support.”

Poppenga attended public school in Springfield, Illinois and received his Doctor of Veterinary Medicine and graduate degrees from the University of Illinois in Urbana.  Prior to coming to UC Davis in 2004, he served on the faculty of veterinary schools at Michigan State University and the University of Pennsylvania.  As a university educator for over 25 years, he has been involved in course and curricular development, development of teaching evaluation criteria, and veterinary and graduate school admissions.

“I know what its like to be in front of a classroom full of students and to grade 100 examinations.  So I’m incredibly appreciative of the dedication of DJUSD teachers.  We need to make sure that they receive the support and resources to continue to do their jobs well.”

He has held leadership positions in a number of national professional organizations including the American Veterinary Medical Association and has served on an advisory committee for the Food and Drug Administration.

He and his wife, also a UC Davis faculty member, are the parents of two daughters in Davis schools – one entering 9th grade at Harper Junior High and the other entering 7th grade at Holmes Junior High in the fall.

“The decisions we make today about how best to educate our children will have an impact for years to come.  As a scientist and university educator, I believe that educational decisions should be based on the best available evidence and best practices whenever possible.  Good decisions also require a constant focus on children and open and honest input from the people who are most important in their lives:  parents and teachers.”

3 thoughts on “Poppenga Officially Becomes Candidate for School Board”