A proper send off was bestowed upon Davis Joint Unified School District (DJUSD) Superintendent Winfred Roberson at Thursday’s Board of Education meeting.

Roberson, who will step down from the position later this month, attended his final Board meeting as district Superintendent, at the historic Community Chambers.

Trustees, district staff members, and parents alike, thanked the Superintendent for his six years of dedicated leadership, and commitment to serving the needs of the over 8,000 students enrolled in DJUSD schools.

The highlight of the farewell turned out to be a pair of moving student-singing performances.

Two numbers from the Fred T. Korematsu Elementary Chorus, led by director Janie Knudsen, included the landmark school’s song, entitled, “What can one little person do?” This proved a fitting character tribute, as did the rendition of “One candle,” to which Knudsen said to Roberson that she “hopes represents what you do in your life and what we do in our lives, too.”

The celebratory sounds of the Renaissance-clad Davis High School Madrigals marked the occasion, falling on St. Patrick’s Day, with an a cappella piece from the acclaimed chamber choir’s sacred, secular and multi-cultural musical repertoire.

Following the performance, each of the five members of the Board, plus its two student representatives, bid adieu to the outgoing steward and future Glendale Unified School District Superintendent. 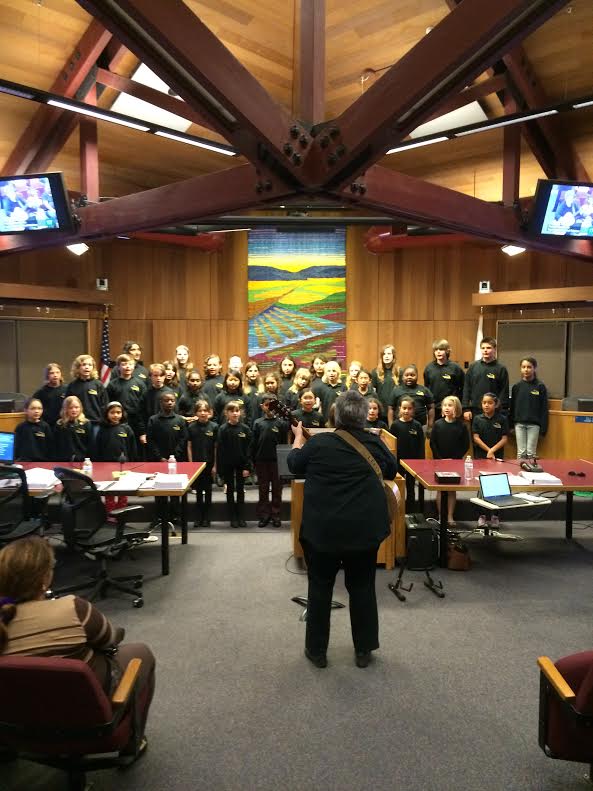 Trustee Alan Fernandes, who, in 2015, served as Board President, said that he was happy for Roberson, and that his new career opportunity “is well-deserved.”

“In my short tenure on the Board, thus far, I have grown with you, as a Board member, and I’ve learned a lot from you,” Fernandes said. “I consider you a friend and demand to be kept apprised of how you’re progress is going and that we keep in touch. But really, I just want to once again congratulate you and let you know personally that I appreciate your service to our school district and wish you all the well-wishes and success as you embark upon this next challenge.”

Now in her eighth year on the Board, Susan Lovenburg has been in direct contact with Roberson, throughout his entire tenure.

Lovenburg said that she believes they shared in their growth on the job, and that the experience “made us both better at what we’re doing.”

“I’ve always liked you,” Lovenburg said to Roberson. “It’s always been my privilege and my pleasure to work with you, but, in particular, I think you are set apart by your very calm approach to everything. I don’t think I’ve ever seen you get upset, despite some of the many things that have come your way, good and bad. You have a very kind heart and that shines through with your interactions with everybody.”

Lovenburg added: “And even more than that is your student focus. We’ve done some good things in this school district, this Board, the previous Board, it’s been through your leadership and willingness to always focus on students and what they need, and to support those who work around students and provide that.” 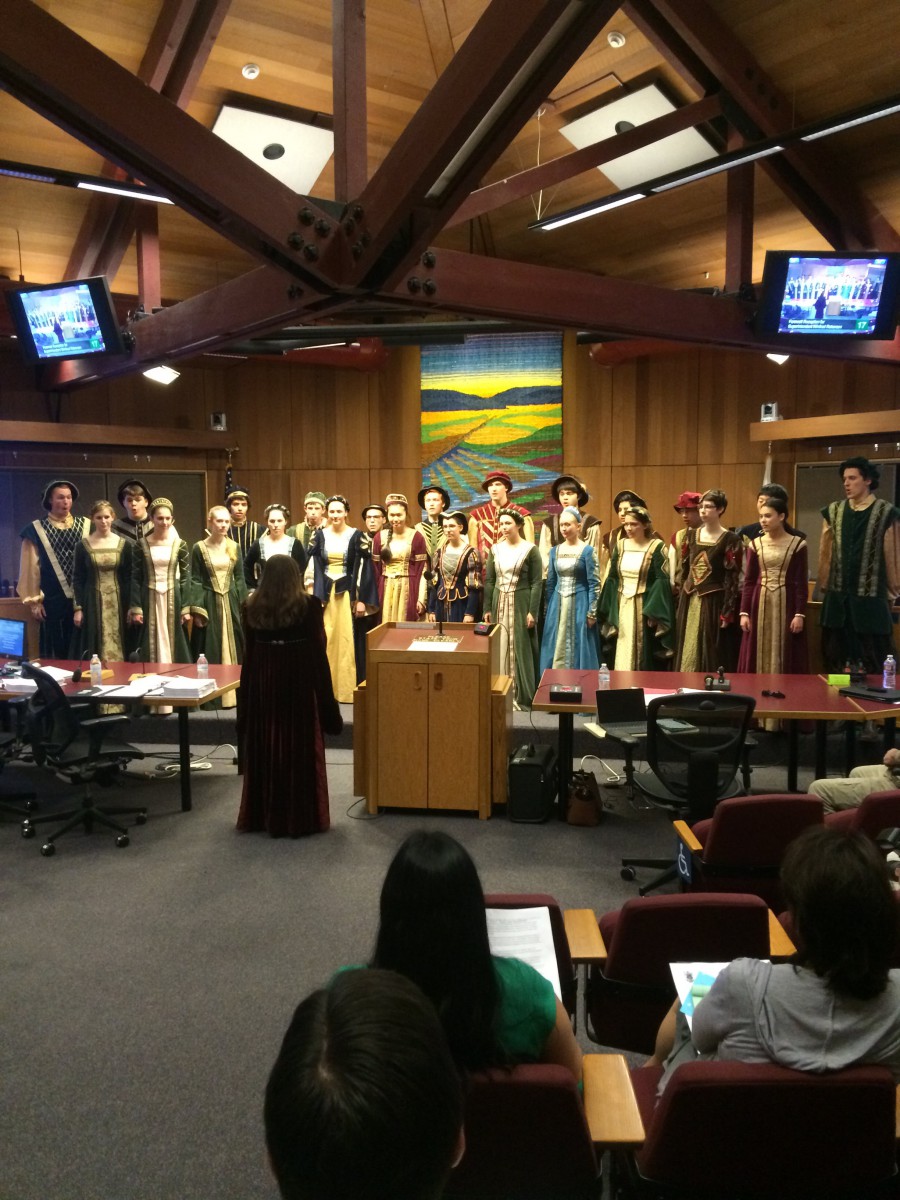 Trustee Tom Adams opted to stay on course with the night’s musical theme, joking to Roberson that “I’m gonna love you like you need me.”

“I thought Clark was going to sing that later. Later, later,” said Board President Madhavi Sunder, in reference to Associate Superintendent Clark Bryant.

Adams recalled the lasting impression Roberson made, upon arrival to the Board, in his willingness to immediately sit down and exchange ideas through an open dialogue.

“You weren’t telling me what to do, and how I should be,” Adams said. “It was more like, ‘well, let’s figure out where you want to go and what you want to do,’ and I think that’s usually the mark of a good teacher. You were first a teacher, always will be. But you were also a leader. And a leader means that you begin with listening and I think that’s a remarkable talent that you have. Not everybody is willing to sit there and have the patience of Job, and listen to every parent in Davis, and do so in a manner that really marks not just a sense that you have to do this because it’s your job, but you did it in all sincerity.”

Lastly, Adams ended with a personalized reference to a James Brown song, saying to Roberson, “Papa’s got a brand new bag.”

Board Vice President/Clerk Barbara Archer was filled with emotion over the thought of losing such a close ally, and friend.

“Anyone who knows me, knows that I’m not a crier,” Archer said. “So it’s kind of weird that this is third time I’ve broken down, anticipating saying goodbye to Winfred. And the Madrigals got me the third time. I have an Irish grandmother, what can I say? And I hate saying goodbye to people.”

Archer thinks what might get lost is how much time the Board and Superintendent spend together, and the intensity and scope of concern.

What hasn’t been lost in the narrative is the prevailing attitude that the demeanor and temperament of Roberson’s enabled him to adapt to ever-changing and often-hectic parameters in which to work.

“There is seriousness, frustration, joy and laughter, sometimes all in the same meeting, and Winfred’s composure under pressure speaks directly to you, no matter the intensity of the topics, is kind of like a superpower, in my opinion,” said Archer. “We must trust that our Superintendent has the best interests of the district, top of mind, always. This was never a question with you, Winfred. Your integrity, your sincere desire to do what’s best for all students and your work ethic, are examples for us all.”

Winston Tran, one of two student Board members, thanked the Superintendent for his contributions, not just to his own school (Davis High), but also to others in the district.

One event, in particular, stood out to Tran, in terms of Roberson, and his level of engagement.

“I remember first playing phone tag with you and it meant a lot that you reached out to me first, and wanted me to come to these school board meetings soon after I was elected school board representative,” Tran said. “That really spoke a lot to me about how much you really wanted students to be a factor in to the highest level of decisions made here in the school district.”

As the district and its temporary new partner, Leadership Associates, begin the estimated two month-long search process for a new Superintendent, the Board is requesting that the community be active, and provide them with input on the decision, in the form of comments and questions, which can be made through a special district website.

The official public notice for the request, along with a survey on the topic, is now up on the district website at www.djusd.net. To fill out the survey, click on the link “Superintendent Search 2016.”