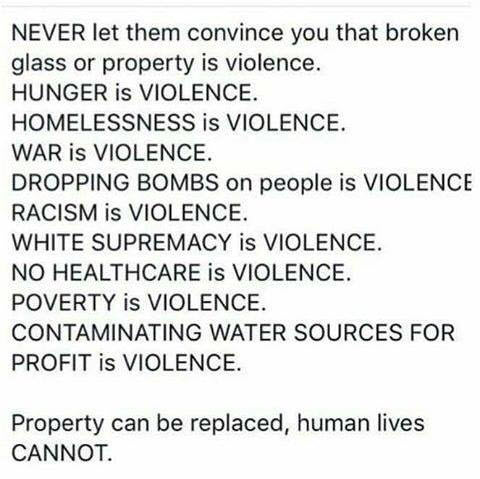 When most people think of violence they tend to picture physical confrontation, weapons, assault, etc. but what doesn’t typically come to mind are such things as PTSD, homelessness, and starvation.  However, as numerous people have pointed out (such as the creator of the image at left since I’m in no way the first person to realize or discuss this issue), a logically consistent definition of violence that doesn’t artificially separate different types of harm people can inflict on one another requires expanding our collective notion of what constitutes violence beyond those things which are conventionally included.  For instance, emotional or mental violence is a very real concept that people experience on a regular basis.  While some people try to downplay the effects of this form of violence and dismiss attempts to address them as “coddling,” anyone who has been forced to deal with distressing situations and environments knows all too well how painful they can be.  This pain would be no less valid and deserve no less attention or understanding if it was independent of physical pain but for those who have never had the misfortunate of being in such a position maybe it will help get the point across to briefly mention similarities between the two.  A series of recent experiments strongly suggest that “social and physical pain have more in common than merely causing distress — they share sensory brain regions too.”  Given this connection there’s no longer any excuse for ignoring the reality of emotional and mental harm or the violence that can cause it.

Another form of violence that’s often overlooked is institutional or systemic violence.  While interpersonal violence can be physical or emotional it’s possible for violence to occur without any specific individuals being to blame.  This is because the way that our society is currently structured hurts people, both emotionally and physically, in a multitude of ways.  A prime example of this is homelessness.  Systematically denying people basic necessities like shelter when the relevant resources are plentiful clearly causes material (as well as mental) harm and rightfully falls into the category of violence.  The same is true of such things as food insecurity and a lack of quality healthcare, both of which affect large numbers of homeless and non-homeless individuals alike.  Just because our culture has normalized these practices doesn’t make the resulting suffering any less real and consequently, doesn’t make them any less violent.  Exploitation and oppression are extremely violent and capitalism, along with other aspects of our current society, rely on both.

Finally, it’s important to recognize that even when it comes to direct physical assault (much less emotional and systemic violence) our society is quite complacent under certain circumstances.

There exist entities which are granted permission to use levels of force that would rarely, if ever, be considered acceptable if used by others.  The most obvious example of this (at least domestically) is the police.  Not only are police shootings rampant in the U.S. but employing excessive force that doesn’t lead to death is a common practice among police departments throughout the country and is disproportionately directed at particular communities (leftists and the most marginalized).  Furthermore, imprisonment and even fines when it comes to those with limited financial resources are themselves examples of physical or material violence.  In some cases such things may be justified to prevent additional harm, though even then the question becomes what other factors might be at play (which could very well include manifestations of emotional or systemic violence) and how might we address these root causes, but in many cases they are not.  We also must acknowledge that current laws are largely designed by and for the elite to serve their own interests rather than those of the people.  This means (among other things) that regardless of the intentions or actions of individual officers (though there’s obviously plenty of situations where these are quite negative, including in Sacramento and right here in Davis, the primary function of policing as an institution is to protect the undeserved wealth and power of the elite and to uphold the resulting systems of oppression and inequality.  Therefore, policing itself is often an act of violence and incorporates components of all three varieties; systemic, emotional, and physical.

What is the solution to all of this violence you might ask?  Well, there are numerous possibilities for implementing reforms within the current system from, though in no way limited to, increasing the availability and accessibility of mental health services (emotional) to housing first programs for the homeless and a universal basic income (institutional) to civilian police oversight boards with the authority to investigate and discipline officers (policing) but to truly tackle these (and really, all) types of violence society will need to be fundamentally restructured.  Capitalism, institutional racism, patriarchal practices, and other forms of systemic oppression will need to be dismantled and replaced.  Policing and prisons, at least in their current form, will need to be abolished.  There are already efforts to imagine what community oriented alternatives to policing could look like.  We live in a society that consistently propagates certain ideas at the expense of others.  These ideas conveniently favor an authoritarian perspective premised on keeping the masses in line for the benefit of the wealthy few.  It’s well past time to start challenging these ideas in ways that go beyond what the status quo allows.  Reforms are nice and useful short-term goals but reframing the narrative and restructuring society to benefit everyone are far better and should be the ultimate objective of any movement, organization, or person that seeks a truly just society.

Connor Gorman is a fifth year graduate student in physics at UC Davis and a trustee on the statewide executive board of the UC Student-Workers Union (UAW 2865), the union that represents Academic Student Employees across the UC system

Share:
Tags:Civil RightsPolicingViolence
Previous : Up to 37 Sponsors For November 4 Event
Next : Sunday Commentary: The Anti-Imam Protest and the Need For Unity

7 thoughts on “The Nature of Violence”