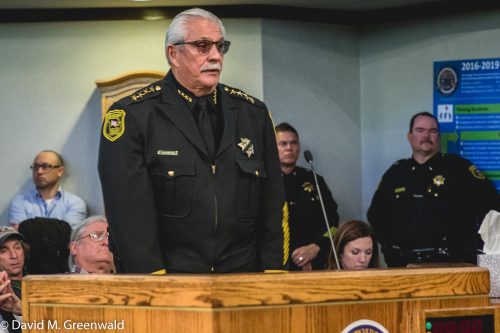 Sheriff Ed Prieto was first elected to his post in 1998 and has completed five terms in office.  However, on Tuesday, Tom Lopez, who has served as undersheriff for nearly a decade, filed paperwork to challenge Sheriff Prieto in the June election.

Mr. Lopez in an email to the Vanguard acknowledged his run, but indicated that he was still forming his committee and collecting signatures and had not prepared a statement or a release announcing his run as of yet.

Sheriff Ed Prieto, speaking to the Vanguard, was caught off guard by the decision of his number two man to challenge him and was not prepared to make a statement at press time.

The sheriff was recently in the news earlier this month.  Six years after a former deputy sheriff accused the sheriff of kissing her on the lips and giving her a number of unwanted hugs, the county settled with Sgt. Victoria Zetwick for a nominal amount of $98,000.

“Prieto subjected plaintiff to unwanted hugs and kisses,” her lawsuit stated. “Plaintiff estimates that over the course of 14 years with the Sheriff’s Department, with Prieto as sheriff, he has

hugged her at least 100 times.

“Each time was awkward, unsolicited and unwelcome for the plaintiff.”

Sheriff Prieto through his attorney denied the allegations, calling the hugs “platonic” and “no different than the type of hug one might give or receive with a grandma or friend.”

The suit appeared dead in 2014 when a U.S. District Court judge found that Ms. Zetwick “did not put forth sufficient facts to support her claim.”  However, that was reversed in November 2016 by the Ninth Circuit Court of Appeal.

In an eight-page settlement document it reads, “In order to avoid the substantial expense and inconvenience of further litigation, the parties now now desire to settle all claims asserted in the complaint, as well as all issues that were raised or could have been in the lawsuit.”

Neither the county nor Mr. Prieto admits wrongdoing on the sheriff’s part.

“It is important to me not only that the issues raised by the grand jury be fully analyzed, but also that all of the employees within the Sheriff’s department be provided an opportunity to be heard,” said Yolo County Sheriff-Coroner Ed Prieto back in June 2014. “I fully support this effort and believe it will enhance my personal commitment and the department’s commitment to excellence and the performance of our duties with increased professionalism and integrity.”

However, that report was heavily accused of embellishment, and failure to substantiate the most serious charges. It was criticized as well by the Board of Supervisors, with Supervisor Matt Rexroad stating it was unclear from the report whether a number of the statements made by the Grand Jury had been factually proven or whether these were simply allegations.

“This thing is written so poorly that I can’t tell whether …” he started. “There’s certainly enough in here for my mind that gives us every reason to go in and look at this operation very carefully.”

Sheriff Prieto is seen as having a strong record on immigration issues, including a refusal to work with ICE.

“We view immigrant communities as people we are sworn to serve and protect, and our patrol deputies do not participate in immigration enforcement,” Sheriff Ed Prieto wrote in a public statement in early 2017.

In a strong message delivered in March 2017, he told a crowd in Woodland that “stuff coming out of Washington DC is frightening,” and that a lot of it he doesn’t support.

The Vanguard will have more on this emerging issue as more information becomes available.

One thought on “Undersheriff to Challenge Ed Prieto”