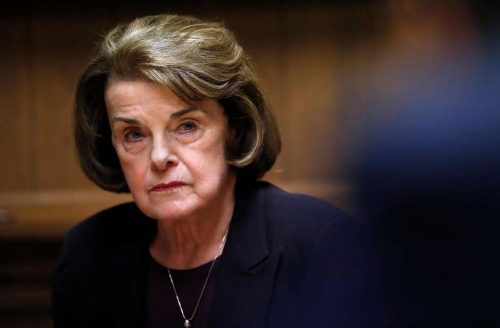 The results from Election Day in early June give one the impression that 26-year incumbent Senator Dianne Feinstein is on relatively safe ground.  She finished a commanding first overall with 44.2 percent of the vote and had nearly four times the votes as her next closest rival, fellow Democrat Kevin de León.

She may still be safe, but warning signs appeared over the weekend as the upstart rival Kevin de León not only secured the party endorsement, he did so in an overwhelming manner capturing 217 of the 333 votes.  By contrast, Ms. Feinstein got just 22 votes.  And a No Endorsement got 94 votes.

That has to be jarring for the long-time incumbent seeking to win another term that could take her into her 90s.

“Earning the endorsement of so many leaders and activists of the California Democratic Party isn’t just an honor and a privilege; today’s vote is a clear-eyed rejection of politics as usual in Washington, D.C.,” Kevin de León said in a statement. “We have presented Californians with the first real alternative to the worn-out Washington playbook in a quarter-century.“

The Feinstein folks must have known she was in trouble here as they asked board members not to endorse either candidate rather than endorse her.

The campaign put on their best face in the wake of this trouncing.

“While 217 delegates expressed their view today, Sen. Feinstein won by 2.1 million votes and earned 70 percent of the Democratic vote in the California Primary election, carrying every county by double digits over her opponent,” said Jeff Millman, Feinstein’s campaign manager, in a statement. “We are confident that a large majority of California Democrats will vote to re-elect Sen. Feinstein in November.”

They in fact have a point.  Following the 2016 elections, the party delegates swelled with the ranks of the activist Bernie Sanders wing of the party, as many activists who emerged in 2016 to back

the former independent’s surprising insurgent campaign stayed on board in hope of re-shaping the party.

That effort nearly paid off as Kimberly Ellis nearly knocked off Eric Bauman, the longtime chair of the L.A. County Democratic Party (LACDP), in a run for party chair.  Nearly 3000 votes were cast last year and she lost by a mere 62 votes.

Where this goes now, it is hard to know.  The Democratic establishment continues to back Senator Feinstein.  She has the backing from Democratic heavyweights like Barack Obama, Joe Biden, Jerry Brown, Kamala Harris and Nancy Pelosi.

The party is worried about unity and the need to focus on competitive congressional races against the Republicans in the fall.  But, in a way, this is almost a freebie for the activist wing to do what the Republican activist wing has done time and time again – unseat an establishment incumbent with a more progressive replacement.

This is what happened in New York, when 28-year-old Alexandria Ocasio-Cortez unseated 10-term incumbent Joe Crowley in what has been called the most shocking upset of a political season that appears to be on the verge of tumultuous.

Does this mean that Dianne Feinstein is in trouble?  Probably not, as the activist base of the party is far to the left of the rank and file.  But this is a strong message that Mr. de León can be more formidable than he showed on Election Day in June.

Back in June, most political consultants saw his bid as a long shot.  Ms. Feinstein has a 10 to 1 financial advantage.

“I don’t think he has enough of a base or enough of a case to make to voters that makes a two-person race between Dianne Feinstein and Kevin de León competitive in any way,” said Katie Merrill, a veteran Democratic political strategist, to the Bee in early June as the primary results were in.

Then again, most would not have given Ms. Ocasio-Cortez any chance against Representative Crowley.

This is a free shot for the activists, and we will see happens.