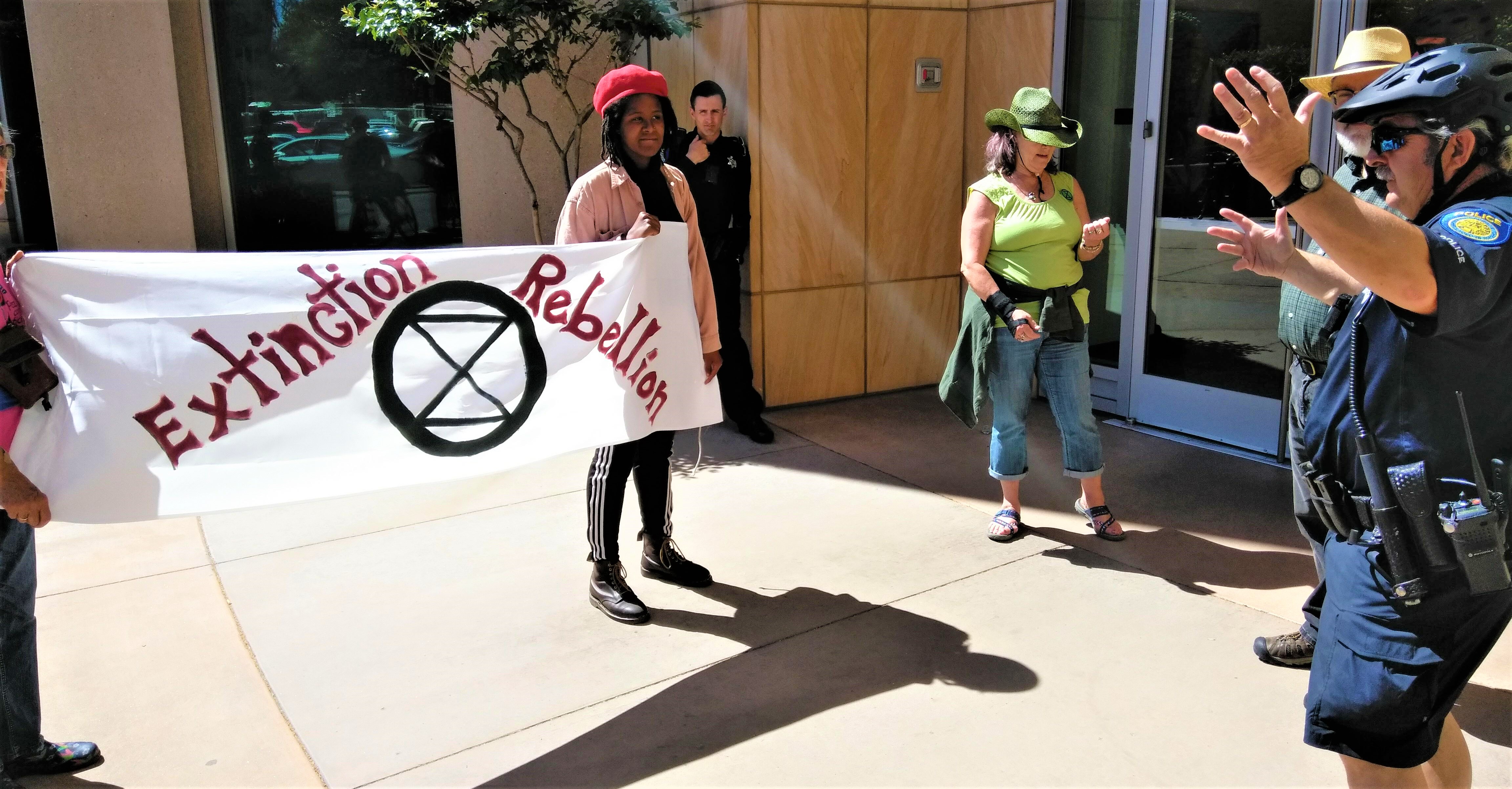 In actions in about 25 cities and more than 30 countries this past month, Extinction Rebellion, or XR, activists have shut down bridges, and glued themselves to buildings and even the ground.

The stakes are high in California. On the table in the legislature are dozens of measures, out of more than 2,600 authored this session, that address clean air and clean water. Extinction Rebellion

wants them all passed.

The first words on the XR website are clear: “We are facing an unprecedented global emergency. The government has failed to protect us. To survive, it’s going to take everything we’ve got…(we will) disrupt the status quo until adequate solutions are implemented by the world’s leaders.”

XR targeted a major oil lobbyist Monday before taking on the Legislature.

“Extinction Rebellion is committed to the use of nonviolent civil disobedience and disruption. We disrupt the system so that business as usual can no longer continue, until the truth of climate change is addressed,” said activists as they targeted the offices of the largest oil lobby in the state, Western States Petroleum Association early Monday. 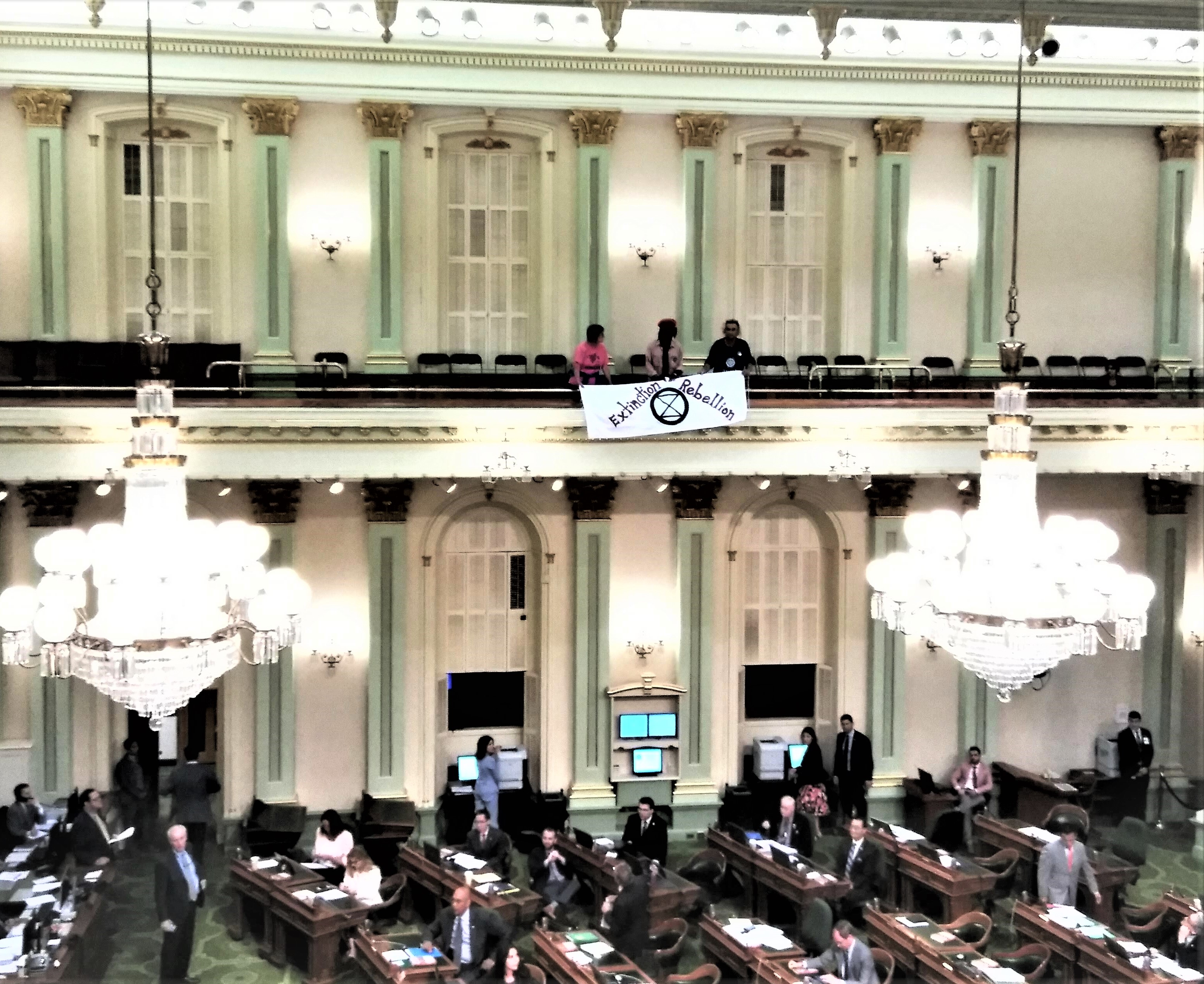 WSPA was ready – private security ran to lock all doors to the building, and officers from the California Highway Patrol and city of Sacramento police ringed the building just across the street from the Capitol.

XR said WSPA was the largest lobbyist in 2017 and second largest in 2018 in money spent, and stopped bills that would have blocked oil drilling and sabotaging clean air programs – spending more than $170 million since 2001. Every bill, except one, opposed by the oil industry has failed over the past three years,” said XR.

Hours later Monday, many of the same Extinction Rebellion activists disrupted the Assembly floor session by flinging an Extinction Rebellion banner over rail in the visitors gallery, and lectured lawmakers to pass environmental legislation – at least for about 3 minutes before security escorted them out of the gallery and building. Assembly marshals did not detain or arrest them for the disruption.

“The biggest emergency that we have in the world at this time is our climate. Sacramento is 30′ above sea level. We will have climate refugees in Sacramento when the polar ice is gone by 2023. That is what the latest science is saying, not 2050, as many people believe,” XR disruptors said.

“The foothills are burning and you Sacramento, the Capitol of California, will be underwater. We need California to be a leader in the climate action, we need to get off fossil fuels by 2025 and carbon zero, by 2025. In fact, 2020 is a better target date for legislation to start, so we have a clear 2020 vision of what we as citizens, can expect , in the very near future,” activists shouted down to lawmakers.

XR stressed that the climate crisis is “exponentially growing…the stakes are “life and death,” noting that XR will take action “into its own hands…only a change of status quo can prevent the pending disaster.”

“I am with Extinction Rebellion because we’ve been pushed to use this historically very effective and FUN tactic to push for change and be understood by a wide variety of people. XR acknowledges many crucial points to climate justice, including a call for a movement led by Indigenous people, Black people, people of color and poor communities,” said Sacramento XR organizer known as Imani.

“XR wants a just transition that includes reparations for these communities that have systematically dealt with environmental injustices the most. We’re not recruiting everyone: we only need 3-4% of the population to rise together to really shake things up. Much more than four percent of the American population believes climate change is an urgent issue to swiftly be addressed,” Imani added. 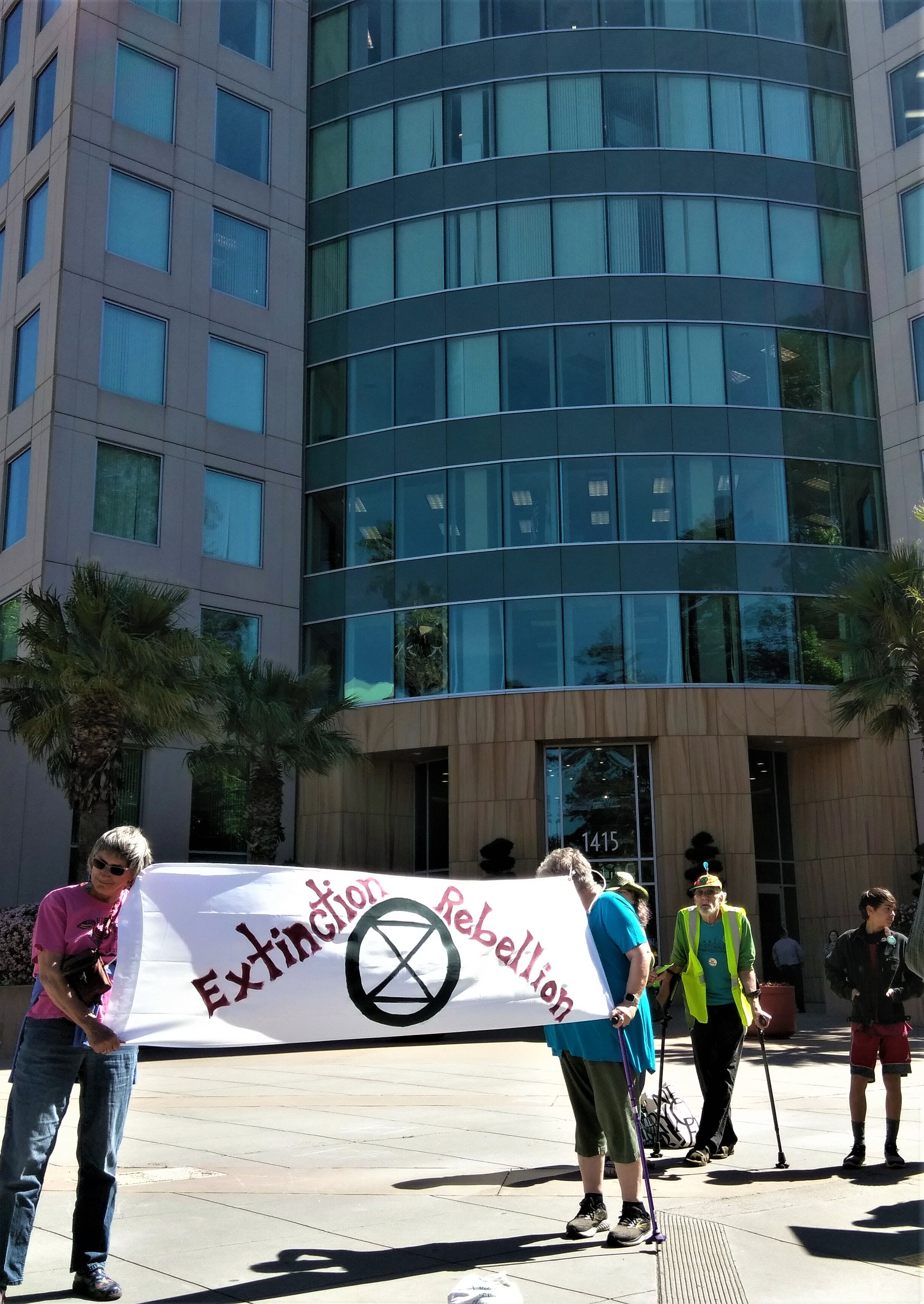 Last week, a half dozen major Sacramento area media newsrooms were targeted by Extinction Rebellion activists, who demanded that the mass media tell the truth about the climate crisis, stating:

”It will be hard, it will be uncomfortable, but we need to have conversations with our friends, family, and strangers on the street. Heartfelt real conversations. We are the reluctant activists who would much rather be sipping wine and sailing around the world or simply watching a baseball game, but if not us then who, and if not now, then when?”

With “less than 12 years to act,” XR listed its demands, including:

1/ The government must work with the news media to “tell the truth about climate and wider ecological emergency” and communicate the “urgency” for change and explain what people and communities must to do to mitigate the problem;

2/The government must pass policies to reduce carbon emissions to net zero by 2025 and remove greenhouse gases now in the atmosphere;

3/A “citizens’ assembly” should oversee the changes, not the government and “politicians” who XR said it does not “trust”;

4/A “just transition” should prioritize the most “vulnerable” people and indigenous sovereignty and pay reparations and “remediation led by “Black people, Indigenous people, people of color and poor communities, and create legal rights for ecosystems to “thrive and regenerate” and repair the “ongoing ecocide” and prevent extinction of human and all species.”