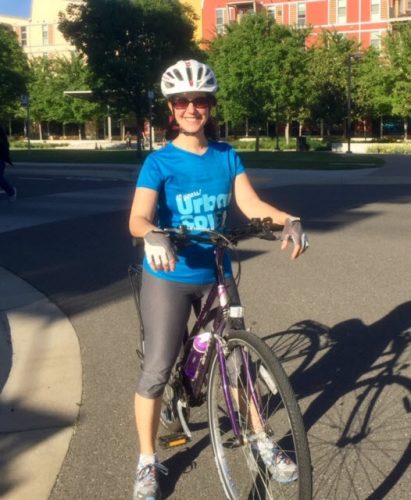 In the summer of 2012, I relocated from New York to Northern California, specifically, to the college town of Davis. There are many things that make Davis a fabulous place to live: fantastic weather, an abundant farmers market, a University smack in the middle of town, a plethora of outdoor activities, proximity to the mountains and ocean (not to mention California wine country), and the amazing city of San Francisco about 60 miles away. But one of the things I love most about Davis is the bicycle culture.

I read about Davis’ bike-friendly reputation before our relocation, and even experienced a little bit of it when we came out here to look for housing before we moved. But nothing prepared me for how truly unique and awesome it is. There are approximately 65,000 bicycles in the town of Davis — approximately one for every person. The bike lane was invented here, and there are bicycle lanes on almost every road in town. In addition, there is an intricate greenbelt system with bike paths that weave through residential neighborhoods, downtown, and campus, making it easy to bike miles without ever having to roll onto a road.

Davisites, as those that live here are called, bike for exercise, commuting to and from work and school, to do errands, and just about everything in between. It is not uncommon to see business events where professionals don’t only carry a briefcase, but also their bike helmet. Parents still get their exercise even if their little ones are too young to ride a bike by pulling their babies in a baby bike carrier. When school lets out, parents don’t line up in their cars the way they do in most other towns, but wait to accompany their kids home by bike. Some of the kids bike alongside, and others ride on the back of a tandem. The farmers market is surrounded by locked up bikes waiting for their owners to return with all of their farmers market goodies to be transported home in backpacks, clip on bike bags, or baskets affixed to the front or back of every type of bicycle.

I’d love to be able to say that every single person wears a helmet. Unfortunately that’s not the case. In California, it’s only a law that children under 18 must wear a helmet, leaving it to the discretion of an adult as to whether he or she chooses to protect his or her head. In other respects, the laws pertaining to bicycles are very strict. Cyclists must follow pretty much all of the same laws that an automobile does. Thankfully, because most people that live in Davis love the bike culture, drivers have a profound respect for cyclists.

I already loved cycling when I lived in New York. My husband and I would ride for exercise and pleasure. In some ways biking in New York was harder than biking here in Davis. We lived in the beautiful Hudson River Valley of New York, in a town called Warwick, which is filled with lots of hills, some of them quite large. We put those hill tackling skills to the test with self-guided bicycle tours through Provence, France in 2010 and then Umbria and Tuscany, Italy in 2015. We biked about 155 miles over 5 days, and sometimes over mountain passes. It was tough work, but the pay offs were awesome! Fabulous views, delicious food and an up-close experience with two beautiful regions. Davis, on the other hand, is blessedly flat from the standpoint of a cyclist, and all of the hills and mountains

surround it, as opposed to being in it. This makes for some pretty pleasant and fast cycling.

I joined a cycling group in Davis and we bike often to the nearby town of Winters. It is a lovely ride totaling about 30 miles from my house round-trip. We bike past campus, olive trees, walnut farms, grapevines, and stop for breakfast at a great little cafe to fuel up for the ride home. When I get back from the ride, I often stop at the farmers market to load up on fresh fruits, vegetables, and baked goods before heading home. I fill up my bike bags to overflowing. My new-found friends have told me that I am now a true Davisite because I’m able to carry so much by bike!

Using a bicycle as a means of transportation is a bonus in many ways. It obviously helps to keep one in shape because it is such good exercise. It also is better for the environment because there are so many less cars being used around town, which means less emissions being released into the environment. It’s also good for one’s wallet, because gas is so expensive these days, so it’s a convenient way to save money.

But by far my favorite thing about using the bicycle as a means of transportation is the unique vantage point that one gets to experience from being on two wheels. Life doesn’t pass by as fast on a bicycle as it does when you’re in a car. You’re exposed to fresh air, nature, sounds, the weather, people, etc. Yes, sometimes that means you might get caught in the rain. Sometimes it means that you might be a little hot and actually break a sweat. You do have to stop for the same traffic lights and pedestrian crossings as you would in a car, which means having a lot of patience. It also takes longer to get to many of your destinations, so you need to plan out your trips more carefully.  You also may wind up riding your bike home in the dark, which means preparing yourself with lights and reflectors. One of the most romantic nights that my husband and I experienced since we moved here to Davis was riding our bikes home in the dark after we had gone to dinner and a movie together. The moonlight was streaming down on us, the air was crisp and fresh, and it felt like it was just the two of us on the road.

Is bicycling as a means of transportation, and as such a large part of the culture of a town for everyone? No, of course not. But for Davisites, and this new member of the community, it’s perfect.

This article was commissioned by The Bike Campaign.  To learn more about how to “Drive Less. Bike More.” contact Maria Contreras Tebbutt at funmaria@sbcglobal or learn more at www.TheBikeCampaign.com