If you look at the polling numbers released by the school district you arrive at a very simple conclusion – they are where they were a year ago and, given what we are asking, they are considerably lower in support of a new tax than they were in April 2016 for a status quo tax.

In April 2016, EMC polled 74 percent support for a parcel tax – when the voters went to polls, 72 percent voted for Measure H.  That’s pretty remarkable to have a poll so accurate that it was within the margin of error of the actual outcome seven months later.

There is good and bad news then with the new poll – the good news is that it is not so bad and they are not far away from the goal.  The bad news is that the district is probably realistically going to need to lift support, from 62 to 65 percent, to upwards of 67 percent in order to get their measure passed.

As they discussed on Thursday night, the key for the district will be to connect the district’s strengths – the teachers are doing a good job (71 percent) and providing a good quality of education (74 percent) to the need to attract and retain high performing teachers and educational staff (89 percent believe important) during a time when the district is not competitive in terms of compensation.

From the district’s standpoint, that is the obvious messaging that they need to connect in the minds of voters.  But there are a lot of speed bumps in the way of that.

Within a sea of good numbers for the district are some less good numbers.  The district management of money is not seen as highly rated, with only 31 percent with a positive view, 34 percent not knowing,

and 35 percent with a negative view.

Some of that is probably out of the hands of the district, but those are the numbers they have to fight.  The trust issue is there as well.  Most of the numbers have been within the margin of error over time, not “I trust the Davis Joint Unified School District to properly manage tax dollars.”

It is unclear why this is the case, but support has dropped from 65 percent last year to 56 percent this year.

And the other polled number of concern: “Taxes in this area are already high enough; I’ll vote against any additional tax measure, even for Davis schools.”  That number polls at 37 percent – a number that if it held would be sufficient to block a parcel tax.

But there are inconsistencies here as well with “Maintaining the quality of our schools should be a top priority, even if it means raising taxes” being at 79 percent – a slight drop from 83 percent in 2016.

These numbers suggest that if the district wants to put a parcel tax forward, they are going to have to run a robust campaign.  Personally I have argued this for years – start with a basic educational campaign, get your spokespeople out to PTA meetings, the rotary club, service organizations, neighborhood associations, anywhere that you can get people who do not normally come out to school board and city council meetings.

The reality is that this is going to be a hard sell, but I come back to the point that I made back in August – we have a good district but, if given trends, we are not going to stay that way unless the community is proactive in maintaining quality of programs and that has to start with competitive salaries for teachers.

The data analysis shows that DJUSD needs between $2.8 and $3.2 million to close the compensation gap.  That will require either the additional revenue of a $200 parcel tax or the comparative reductions through staffing. 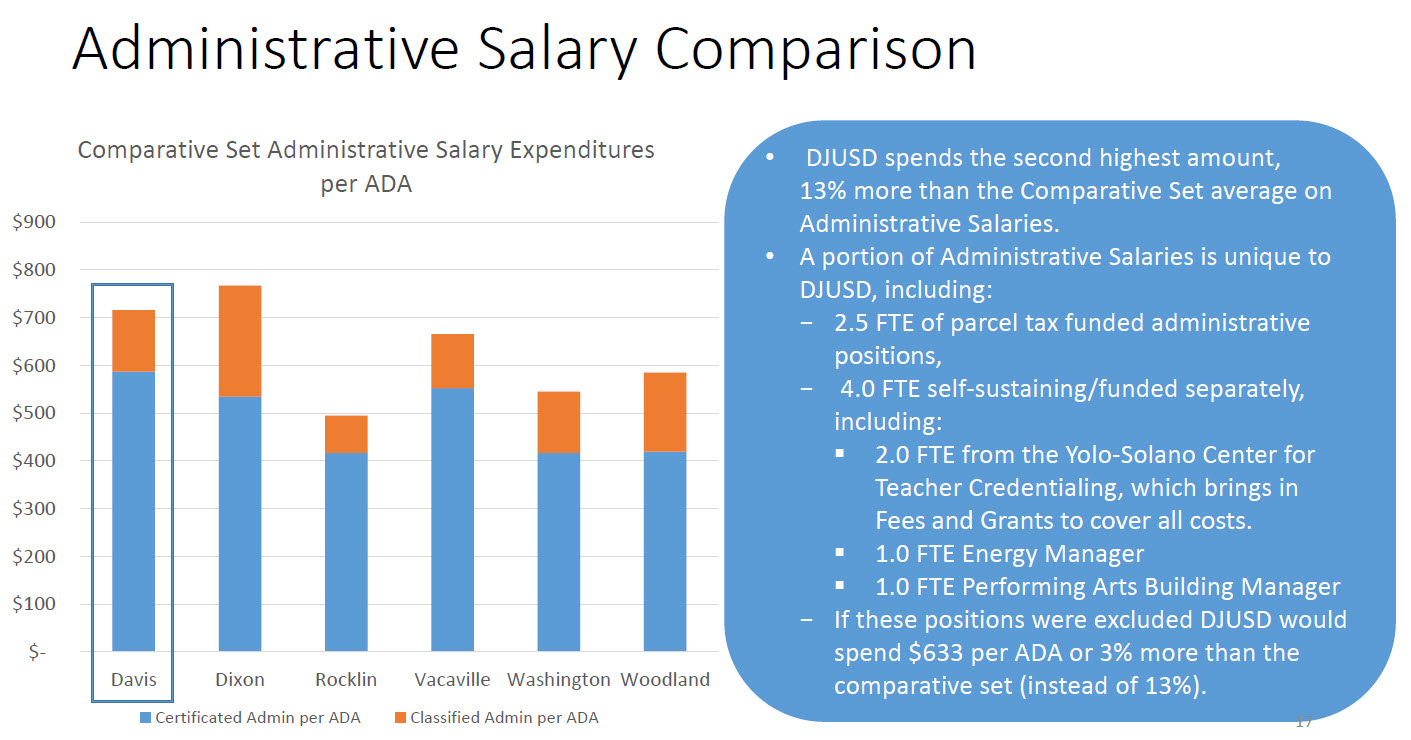 When I talk to people in the community about the compensation gap, they remember administrative salary increases.  The folks on the school board need to understand that I get people who have never voted against a parcel tax in their lives balking at supporting the next one because of this issue.

You can argue the math here – the administrative salaries are not large enough to make a real difference.  But the perception is important.

And the data provided by the district shows that “DJUSD spends the second highest amount, 13% more than the Comparative Set average on Administrative Salaries.”

It is an easy talking point that the opposition can raise that will resonate with the voters.

One of the keys to the LA Parcel Tax loss is that the business community opposed the parcel tax and put money in behind that effort.  If you have the usual opposition to the parcel tax, you might be able to survive this issue, but if you have real and organized opposition, this issue taps into the 35 percent figure on the management of tax dollars. 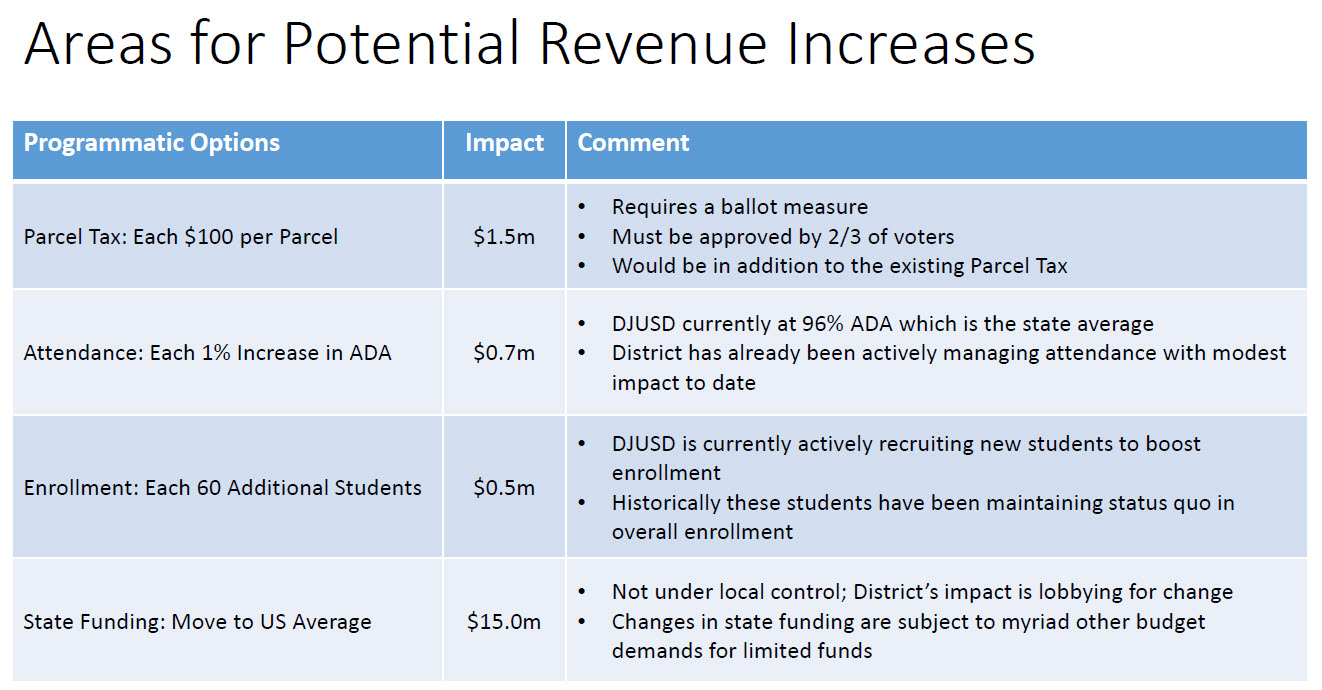 Are there other ways to produce additional revenue?  I’m going to go with no.  The idea of increasing the ADA (average daily attendance) is going to be a huge hassle for parents.  I already had a letter from the district questioning legitimate absences for my daughter and threatening to make me get a doctor’s note – I can tell you, it’s just going to tick people off and $700,000 is nice, but doesn’t move the needle.

Increasing enrollment is fine, people really don’t understand the math there but the district can take on another 60 to 120 students easily without increasing staffing or facilities and that is largely pure revenue – another $1 million.

State funding is not under local control and would not help the district close the compensation gap.

Bottom line: if we go the revenue route, it is going to need to be a $200 parcel tax.

Can we cut our way to this? 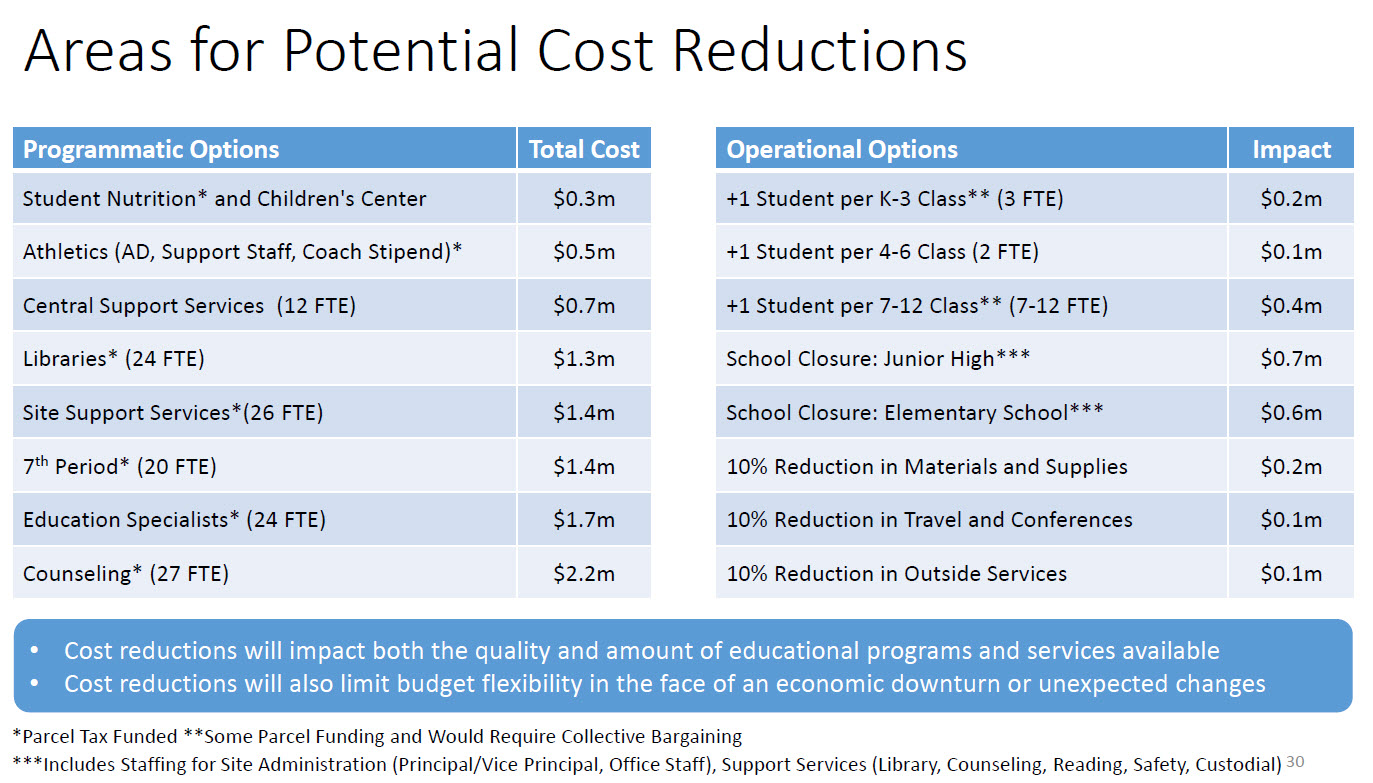 The answer is clearly yes.  If the parcel tax fails, then the district needs to pull this chart back up and figure things out.

This chart shows a few ways to get there.  One way would be to simply put another parcel tax on the ballot at the same $620 level and shift money from things like 7th period, libraries, paraeducators, and counselors to compensation.  That is where the money is and, while it would clearly take another vote, it would be a relatively simple sell.

Would I want to eliminate 7th period day, cutback on paraeducators, counselors and libraries – no.  I think the quality of education would be harmed.  But I think the district does itself a disservice to argue we can’t do it.

From the district’s perception, the first step here is to put the parcel tax before the voters and attempt to sell the voters on the plan to increase revenue to close the compensation gap, arguing that this is the way to maintain our high quality education.

If that doesn’t work it becomes a matter for the voters to prioritize between programs and compensation.

We now have the analysis available to show the voters the tradeoffs involved.

Share:
Tags:DJUSDparcel taxTeacher Compensation Gap
Previous : Defense Discusses Difficulties in Bringing New Witnesses in Ajay Dev Case
Next : A Look Back At a Discussion on Economic Development in Davis

46 thoughts on “My View: Parcel Tax Should Be Pursued, but We Need to Address Other Issues”