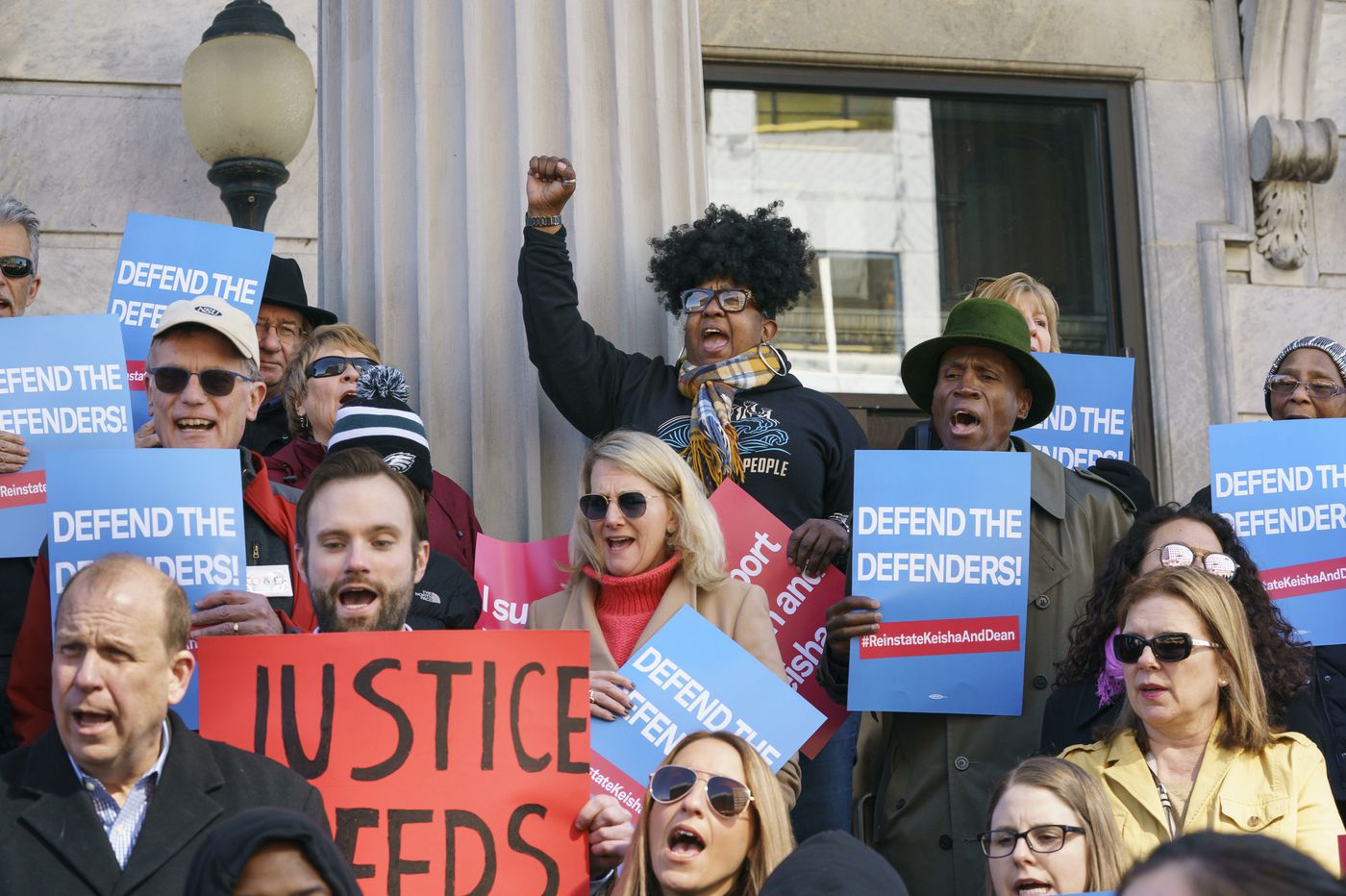 Despite hours of testimony from roughly 50 residents and stakeholders, the Montgomery County Commissioners did not vote Thursday to reinstate its two top public defenders, whose firing in February drew national backlash.

The three-member board of commissioners met for the first time since removing Chief Public Defender Dean Beer and Deputy Chief Keisha Hudson from their positions on Feb. 26, after their office filed an amicus brief in support of a lawsuit challenging bail setting practices in Philadelphia.

Board chair Valerie Arkoosh did not support reinstatement but said Thursday that she agrees the criminal justice system needs reforming.

“It’s been a very, very difficult decision for me as I’ve weighed issues that are personnel issues versus policy that I’ve never ever opposed,” Arkoosh said.

Others in attendance on Thursday expressed support for the public defenders. John McMahon, a defense attorney and resident of Montgomery County, called Beer and Hudson courageous for filing the brief and highlighting the “unconstitutional bail practices” in the county.

“Your action in firing these two dedicated public servants at a time and under circumstances that were all but certain to create an undeniable appearance of impropriety is deeply troubling,” he said during public comment.

The amicus brief argues that how and when bail is set in Montgomery County is unequal and problematic. In particular, it noted that there is often no defense counsel present at bail hearings and that police, not the district attorney’s office, generally make a recommendation for bail—a common practice across the state.

The Appeal reviewed nearly 30,000 criminal dockets filed in Montgomery County between Jan. 1, 2016 and Dec. 31, 2018, and found that whether a person is held in jail pretrial depends heavily on which police department files the charges.

Ten of the more than 50 police departments in the county filed at least 1,000 criminal cases between 2016 and 2018. Pretrial detention rates varied widely across those departments: 56 percent of people charged by Norristown Police Department were held pretrial, while 23 percent of people charged by Pennsylvania State Police Skippack were held pretrial.

In the brief, which was ultimately withdrawn at the request of county commissioners, the public defender’s office also highlighted several cases of low-income people held on cash bail, including a teen mother held on $50,000, a man held on $250 bail for stealing Oil of Olay, and an elderly woman held on $5,000 bail for stealing a bottle of wine.

More than 40 percent of people with bail set at $500 or less in the county between 2009 and 2013 were unable to post bail, according to data published by Measures for Justice.

The Appeal also found that Black people in the county were significantly more likely to be held pretrial than white people, and more than 60 percent of people charged with a felony as their lead charge were held pretrial.

The issues and concerns raised in the brief are not unique to Montgomery County. Because magisterial district judges are given wide discretion in how they set bail, the amount someone has to pay and the frequency in which cash bail is imposed can fluctuate from county to county and even from judge to judge.

High bail amounts are also often used to coerce people charged to plead guilty as a way to get out of jail. Indeed, a 2018 study found that people held in jail pretrial were more likely to plead guilty than people who were not held pretrial. The researchers also found that, on average, people held pretrial had an annual income well below the federal poverty line and were less likely to find gainful employment after their release.

Public defenders in Pennsylvania are employees of the county who can be hired and fired by the county commissioners. The commissioners do not wield the same authority over district attorneys or judges, who are independently elected.

Beer said being employed at the will of the commissioners can create a chilling effect on public defender’s offices wishing to advocate for reforms to the system.

“It’s inherently troublesome because you are appointed and you are at the will of politics,” Beer said.

Beer’s concerns were echoed by nearly 30 members of the public defender’s office.

“To witness our chiefs fired, in serial fashion, escorted from the Office by security, given no opportunity to explain their dismissal or to check on the staff they had recruited and advocated for daily was deeply upsetting, and created a sense of confusion, fear, and had a chilling effect on those of us who remained,” an open letter from the public defender’s office read. “We were left to question the independence of the Office, the impact of our advocacy, and whether such advocacy would be limited.”

Beyond the outcry over Beer and Hudson’s firing, the decision to remove them was made behind closed doors in possible violation of Pennsylvania’s Sunshine Act, said Melissa Melewsky, media law counsel for the Pennsylvania NewsMedia Association. Pennsylvania law allows for discussion of firing employees in a closed meeting, she said, but requires that a vote be taken during an open meeting to make that action official.

“Hiring and firing is ‘official action’ that must take place at a public meeting, and there has to be an opportunity for public comment prior to the vote,” Melewsky told The Appeal.

The commissioners met in private on Feb. 25 to discuss “personnel issues,” had security physically remove Beer and Hudson from their office a day later, but did not vote on the firing Thursday.

Montgomery County Commissioners spokesman John Corcoran told The Appeal that it was the commissioners’ position that they do not have vote publicly to make Beer and Hudson’s termination official.

The board will not meet again until 10 a.m. on March 19. Until then, the official status of Beer and Hudson’s positions potentially remains in legal limbo.