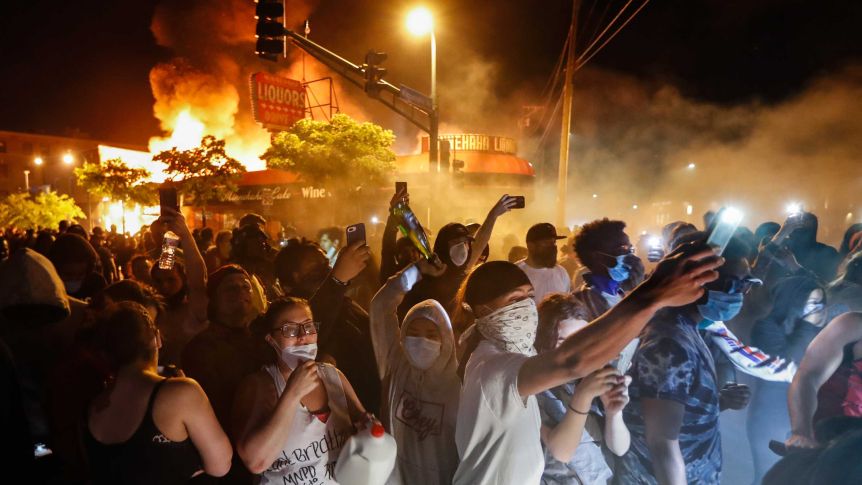 It is hard to see where all of this is headed, as we are in the middle of it.  At the beginning of the year, it seemed we had a chance to survive as a nation despite all of the weirdness of the last four years, more or less intact.

But this year has dealt critical blows to that theory.  Worldwide pandemic.  Economic collapse.  Pushbacks against civil authority.  And now, if not the wholesale breakdown of civil government, massive cracks are starting to form.  First the right, then the left.

Historically it is not surprising to see a police action trigger protests and sometimes riots.  Watts started after a traffic stop.  The 1992 riots happened after police officers who beat Rodney King were acquitted.  Riots in 1968 started after Martin Luther King’s assassination.

“I think America must see that riots do not develop out of thin air. Certain conditions continue to exist in our society which must be condemned as vigorously as we condemn riots. But in the final analysis, a riot is the language of the unheard. And what is it that America has failed to hear?” – Dr. Martin Luther King Jr., “The Other America” delivered on April 14, 1967, at Stanford University.

Perspective is important.  The level of violence here is not comparable to the 1960s or the Rodney King riots.  The turmoil of 1968—with the backdrop of the Vietnam War, the Civil Rights Movement, several years of riots in inner cities, the assassinations of MLK and RFK, the Chicago Democratic Convention—probably still outweighs what we have seen this year.

Maybe leadership in 1968 was just as frayed, but it feels more inept today.

As Paul Willis wrote in a column in the Bee, “Our nation is nearing a tipping point, and we do not have unified leadership about how to move forward.”

The last four years, the pandemic, and the economic collapse has put us near an edge.  And now what we lack is a national consensus to pull us out.  There is no person who can emerge who can unite the

country.  Point the fingers whichever way you want, as I’m sure you will.

We saw this in the coronavirus emergency—normally America rallies around its leader in times of crisis.  But normally the leader urges calm, urges every one to pull together, doesn’t take late night potshots on social media, and doesn’t falsely declare the emergency is over.

It doesn’t help that America is so divided.  It doesn’t help that this particular disease followed the fault lines of America so clearly and so profoundly.  Urban areas got hammered.  Rural areas were relatively unscathed.  People of color and the vulnerable became the victims.  Many of the rest of the country escaped the worst.

Instead of pulling together so that we could weather this storm, the political fault lines were magnified.  As people were dying and getting sick by the thousands, waves of protests pressured governors to re-open against the advice of medical experts.  How those series of decisions will play out remains to be seen.

Medical experts themselves have come under fire.  The war against science has magnified, not narrowed.

As we head into a new crisis of our republic, one of the key questions is really whether we can set things back on a course of trust in our basic democratic institutions.  Or is the damage too far gone?

Whatever is happening now is, in a lot of ways, a reflection of our times.

As the NY Times writes in a news analysis: “Mr. Trump has presented himself as someone who seeks conflict, not conciliation, a fighter, not a peacemaker. And he has lived up to his self-image at a perilous time.”

They write: “With a nation on edge, ravaged by disease, hammered by economic collapse, divided over lockdowns and even face masks and now convulsed once again by race, President Trump’s first instinct has been to look for someone to fight.”

They add: “While other presidents seek to cool the situation in tinderbox moments like this, Mr. Trump plays with matches.”

The media across the board has criticized the President for making little to no appeal for calm.

Instead, on Saturday, he blamed the unrest on “Liberal Governors and Mayors” who he called on to get “MUCH tougher” on the crowds, himself threatening to intervene with “the unlimited power of our Military” and perhaps more dangerously he called on his supporters to have a “MAGA NIGHT AT THE WHITE HOUSE.”

“Big crowd, professionally organized, but nobody came close to breaching the fence,” the president wrote on Twitter on Saturday morning. “If they had they would have been greeted with the most vicious dogs, and most ominous weapons, I have ever seen. That’s when people would have been really badly hurt, at least. Many Secret Service agents just waiting for action.”

The Chronicle Editorial noted, “Rather than the misconduct of an officer charged with murder, he reserved his outrage for the enraged, expressing it in deliberately racist terms.”

He tweeted in a tweet that “violated the Twitter Rules about glorying violence,” “These THUGS are dishonoring the memory of George Floyd, and I won’t let that happen.”  He added, “Just spoke to Governor Tim Walz and told him that the Military is with him all the way.  Any difficulty and we will assume control but, when the looting starts, the shooting starts.”

The Chronicle notes that the word “thugs” is a a word freighted with racist connotations.

They also noted the historical significance of the quote “when the looting starts, the shooting starts.”

Writes the Chronicle: “That phrase, coined by a Miami police chief who advocated a merciless response to Civil Rights Era unrest, was also approvingly quoted by the segregationist presidential candidate George Wallace.”

The president later attempted to walk it back by suggesting he was merely warning of the danger.

But as Michelle Goldberg pointed out in her Friday op-ed in the NY Times, “his meaning was obvious enough.”

As she noted, “This is the same president who on Thursday tweeted out a video of a supporter saying, “The only good Democrat is a dead Democrat.””

The Chronicle for its part added, “In case there was any doubt as to the president’s intent, he emphasized ‘thugs, had the comment re-posted by the official White House account and repeated the phrase in a later tweet.”

And of course this is nothing new, Michelle Goldberg writes, “The Trump presidency has been marked by shocking spasms of right-wing violence: the white nationalist riot in Charlottesville, Va., the massacre at the Tree of Life synagogue in Pittsburgh, the mass shooting targeting Latinos in El Paso. But even as the country has simmered and seethed, there hasn’t been widespread disorder. Now, though, we might be at the start of a long, hot summer of civil unrest.”

She points out: “So many things make America combustible right now: mass unemployment, a pandemic that’s laid bare murderous health and economic inequalities, teenagers with little to do, police violence, right-wingers itching for a second civil war and a president eager to pour gasoline on every fire.”

“I think we’re indeed in a moment where things are going to get a lot more tense before they get more peaceful,” said the University of Michigan historian Heather Ann Thompson, who won the Pulitzer Prize for her 2016 book Blood in the Water: The Attica Prison Uprising of 1971 and Its Legacy.

I think it was telling that some of my right wing commentators spent their day tracking down rumors that these are outside agitators and showing that federal investigators are looking at Antifa as a culprit.

In an interesting report from the AP, “government officials have been warning of the ‘outsiders’ — groups of organized rioters they say are flooding into major cities not to call for justice but to cause destruction.”

At the same time, they report, state and federal officials have offered a variety of assessments as to who the outside agitators are.

“They’ve blamed left-wing extremists, far-right white nationalists and even suggested the involvement of drug cartels,” the AP reports.  And at the same time note: “These leaders have offered little evidence to back up those claims, and the chaos of the protests makes verifying identities and motives exceedingly difficult.”

The AP continues: “The finger pointing on both sides of the political spectrum is likely to deepen the political divide in the U.S., allowing politicians to advance the theory that aligns with their political view and distract from the underlying frustrations that triggered the protests.”

The more important question is not who is involved, but where this will head—will we head toward more polarization and a further breakdown of civil government, or will cooler heads prevail?

I get the concern expressed by Paula Willis and some on the left who believe “the social contract was always null and void because enslaved peoples weren’t even considered fully human to agree to such terms.”

She asks an important question: “Has America ever really loved black people or only when it’s convenient? Can a slave master ever love his slave? This has always been an abusive relationship without honesty or respect.”

Where I might differ with some of my lefty compatriots is my belief that the breakdown of civil society will make things worse for those most vulnerable—not better.

Somehow, someway, we must find a way to come together and to put Humpty-Dumpty back together again.  That may be easier said than done.

71 thoughts on “Sunday Commentary: We Are in Unprecedented Times”