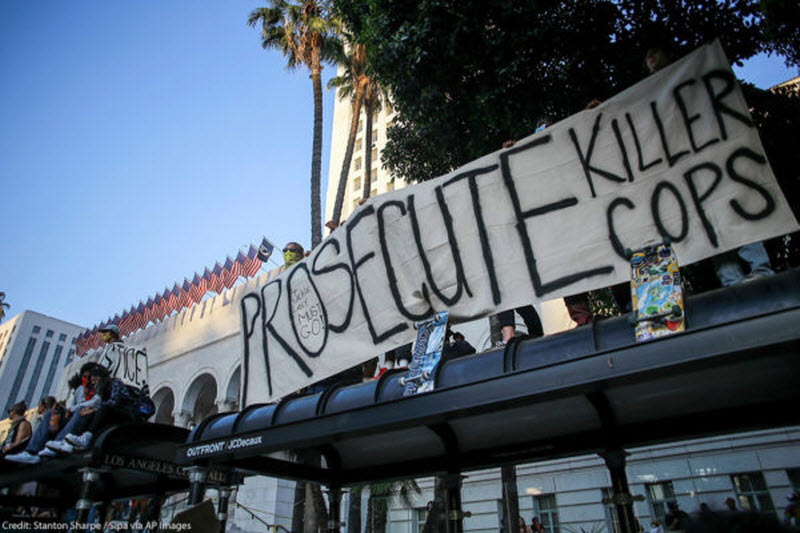 Real justice and safety for Black communities will require a complete overhaul of the prosecutor-police relationship.

Just one month ago, the world saw a video of Minneapolis officer Derek Chauvin kneel on George Floyd’s windpipe with an eerily calm demeanor, while officers Tou Thao, J. Alexander Kueng, and Thomas Lane acted as the lookout men. Despite what we all saw, however, Hennepin County Attorney Mike Freeman at first refused to arrest or indict any of the four men, insisting, “I will not rush to justice.” This was keeping with his prosecutorial instinct: In his first 16 years in office, Freeman did not charge a single officer for a civilian killing.

After days of relentless local and national protests, Freeman finally brought a third-degree murder charge against Chauvin. Minnesota Attorney General Keith Ellison soon stepped in, announcing on Wednesday that he would enhance the original charge against Chauvin and also bring charges against the three officers who watched and held the crowd back. However, it took a nauseating video, the herculean efforts of protesters, and global outrage simply to trigger criminal proceedings. That is because the local prosecutor’s instinct was to protect the officers he works with rather than the citizens he serves.

Freeman’s initial reaction is a normalized pathology that extends beyond Minneapolis. Many prosecutors around the nation have a toxic, co-dependent relationship with police. Prosecutors and police are more than just institutional allies in law enforcement; they are often partners in the police’s crimes. The seemingly unending list of young Black people killed by police without local repercussions—Michael Brown, Philando Castile, Stephon Clark, Eric Garner, Tamir Rice, Alton Sterling, and more—speaks to this phenomenon’s persistence and national scope. So, while many will focus on the short-term victory of criminal charges, prosecution alone will not prevent the next atrocity. We need a complete overhaul of the prosecutor-police relationship.

As we argued recently in the Boston University Law Review, police exert significant control over prosecutors in

both formal and informal ways. For example, in sociological research examining police and prosecutorial practice in Chicago, prosecutors relied on police testimony to win trials, and those trial wins were essential to earning promotions within the office. Prosecutors described an overt pressure to comply with a police culture of “silence and violence” that all but dictated that prosecutors operate with “blinders” on. This meant that questioning an officer’s version of events, whether there was a dead suspect or just a missing bag of drugs, was seen as a sign of “disrespect” to the officer. Conscientious prosecutors who questioned the legitimacy of a police report or the word of an officer could end up with tarnished reputations amongst law enforcement, resistance from officers, and marginalization in the office.

This perverse incentive structure normalized police perjury and created the conditions upon which police misconduct could thrive in small and big ways. These practices stacked the deck in favor of the state in run-of-the-mill prosecutions and often violated the law—both state and constitutional. But, in the most extreme cases, where a suspect was shot or killed, they helped ensure that there was no justice for the victim or community, no accountability for the police, and the officer involved was allowed to continue walking their beat.

Despite the power that police exert over prosecutors, however, prosecutors are not exactly potted plants either. The law gives prosecutors vast discretion to criminally charge and otherwise decide the course of criminal cases. But when police are the ones committing crimes, prosecutors often deploy that power to cover for and effectively encourage the criminality, rather than to combat it and seek justice. After all, prosecutors know where their bread is buttered

This occurs in overt ways, like charging (though later dropping, under pressure) Breonna Taylor’s boyfriend in order to whitewash a murderous no-knock warrant. But it also takes more mundane forms. Failing to disclose a witness statement that contradicts a favorite officer; dropping charges that involve police misconduct, before a judge can hold the officer accountable in open court; even quietly but effectively lobbying against police reform. These subtle manipulations of the criminal justice system allow the gravy train to keep running and, eventually, make the failure to charge an officer like Chauvin not a momentary lapse, but the natural culmination of a career-long partnership. This is why, even if officers like those in Minneapolis—or nationwide—are eventually charged for their crimes, those one-off instances are unlikely to stop police and prosecutors writ large from continuing their mutually beneficial dance.

There are straightforward fixes to this state of affairs, including increased oversight, ending police-protective doctrines like qualified immunity, and electing truly independent prosecutors. When it comes to officers like Chauvin who have a history of complaints, prosecutors can refuse to call them to testify in criminal cases.

However, we need to properly diagnose the problem before discussing solutions. Much like Americans tend to ignore voting rights until election years, or pandemic prevention until after one hits, we tend to scrutinize the prosecutor’s role in police violence only in the wake of high-profile killings. And rarely do we consider police-prosecutor co-dependence as a systemic, national phenomenon, rather than a static, local one. But we need to start.

Only then will we understand how Chauvin could remain so calm and at ease, with his hands in his pockets, as he killed George Floyd—even with numerous cameras and his own bodycam running. Perhaps it was the near assurance that Floyd’s death would be of little importance to his prosecuting counterparts, at least compared with the hundreds of cases they would need Chauvin for in the future. Perhaps he believed that prosecutors would, as so many had before, step in and clean up the scene of his crime.

Somil Trivedi is a Senior Staff Attorney for the ACLU.  This piece was originally published in Slate.