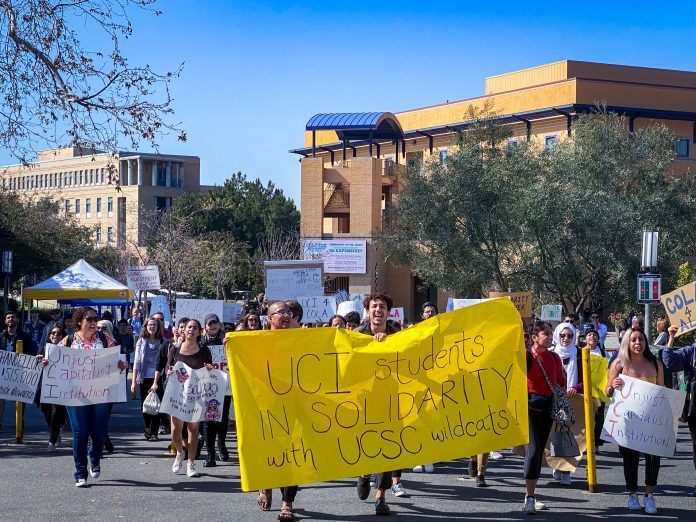 IRVINE – At the University of California, Irvine, the demands and stated hardships of the university’s graduate student population have again been found in the spotlight.

In a move in similar to UC Santa Cruz’s March decision to fire many striking graduate students, UC Irvine this week announced the opening of student conduct investigations against some students who participated in February 20 protests.

UCI4COLA called the recent action an affirmation of “UCI’s unrelenting refusal to respond to its own graduate students’ demands for the bare minimum of racial and economic justice: a livable wage.”

UCI launched student conduct investigations towards many students affiliated with the February graduate student march at the Irvine campus, which joined with graduate students across the country in demanding more equitable wage policies from their universities.

Hundreds of students and supporters rallied at the February action in front of Aldrich Hall, an administrative building on the campus.

According to the student group, UCI4COLA—which advocates for a Cost of Living Adjustment (COLA) at UC Irvine to accommodate low wages and rising rents—protesters on the day were met by the university with “a hostile environment” and “heightened police presence.”

Students attempted to access the building to talk directly with administration, but campus police responded by putting the building under lockdown.

During the lockdown, a Black woman, unaffiliated with the protests and simply trying to obtain a copy of her transcript, was tackled and taken into custody by a campus police officer. UCI4COLA labeled the arrest as “indicative of the anti-Blackness that pervades UC Irvine and the UC system as a

The march was scheduled in solidarity with graduate student strikers at UC Santa Cruz, who had then been in a months-long strike against the university for a cost of living adjustment, among increasing rents and a growing housing shortage across California.

According to UCI4COLA, “housing costs for graduate students at UCI have consistently exceeded the federal standard of burden for the past six years.”

In response, UCI4COLA is advocating for a cost of living adjustment of $1,084 per month for every graduate student (without increases to tuition or campus fees) to meet rising housing costs. The additional $1,084 of wages would be around a 50 percent increase in monthly income for UCI graduate students and “is needed so that the average grad student at UCI is no longer house burdened”.

They want to start with the firing of the officer responsible for the arrest and assault of the Black alumnae during the campus protest, and the release of the officer’s body camera footage.

The untenable living situation that many graduate students say they have faced, however, has not been limited to Santa Cruz and California, with graduate students across the country sharing similar concerns for their economic security and joining in on work strikes against their universities.

In the time of COVID-19 and a growing global recession, concerns about the economic precarity of many students have only deepened and contributed to the urgency of university policy reforms.

Share:
Tags:Cost of LivingLaborUC Irvine
Previous : ACLU Client Finally Released after Being Held for More than 17 Months without Charge
Next : Guest Commentary: The Hidden Agenda of Black Lives Matter