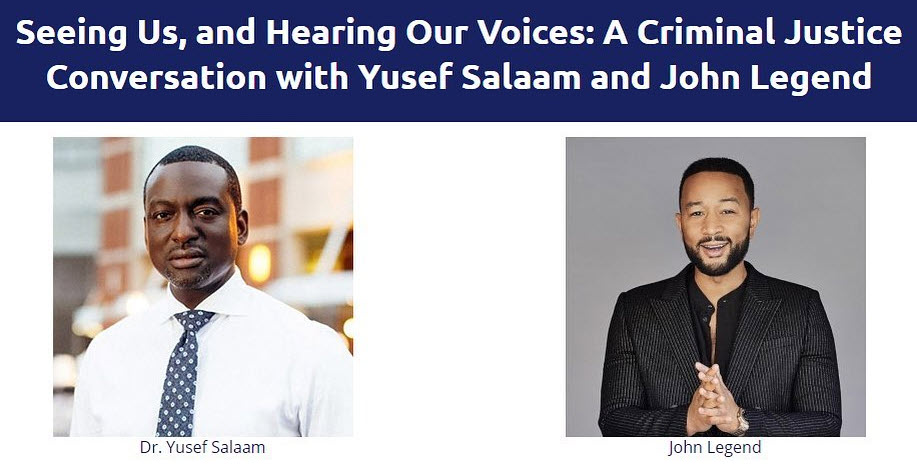 PHILADELPHIA – The Quattrone Center for the Fair Administration of Justice at the University of Pennsylvania Law School hosted an online conversation last week with world-famous recording artist and criminal justice reform advocate, John Legend, and a member of the Exonerated Five, Dr. Yusef Salaam.

The event was a part of the University of Pennsylvania Carey Law School’s Achieving Racial Justice. The conversation was moderated by John Hollway, the executive director of the Quattrone Center.

Dr. Yusef Salaam is a member of the Exonerated Five—five teenagers who were wrongfully convicted for the rape of a female jogger in Central Park in 1989. DNA evidence ultimately exonerated all five men, but not before Dr. Salaam spent five and a half years in prison for a crime he did not commit.

Since his release, Dr. Salaam has used his platform to share his story with others and educate the public about the impact of mass incarceration and police brutality that are rooted in our justice system. Dr. Salaam has received a lifetime achievement award from former President Barack Obama and he recently published the book Punching the Air with national book award finalist Ibi Zoboi.

John Legend is a Penn alum and a vocal advocate of criminal justice reform, reducing mass incarceration, and improving and reforming the role of prosecutors in our communities. He is the co-

creator of the “Unlocked Futures Accelerator,” an initiative to help returning citizens.

Hollway started off the conversation with the question, “With the change of administration, what are the areas that you see that are ripe for criminal justice reform and where are you focusing your energy as we go into 2021?”

Legend responded, “For a long time, so much of what we’ve asked the government to do is related to policing, jailing, imprisoning people to help keep us safe. I think that focus on keeping us safe by causing harm, particularly to Black and Brown communities, has been so detrimental to actual public safety.”

The webinar also discussed the issues of radical reform versus incremental reform.

A professor at Golden Gate Law School, who has a number of students coming from both “privileged and heavily surveilled communities,” sent in a question regarding words of advice for individuals going into the profession of law, how they should be using their legal skills and how they should be thinking about being police officers, prosecutors, defense attorneys of the future.

Legend replied, “We should look at our funding priorities and de-prioritize the funding of police as they’re currently constituted. Think about how we could invest that money in other things that would actually make us safer and prevent crime from happening in the first place; prevent despair, prevent homelessness, and prevent all these other conditions in our communities that lead to crime so that we would reduce the need for police.”

Dr. Salaam added in response, “One of the things that popped up was the idea of separation of church and state and how it was legal in this country for people to own people —that was a law. We have to have the people who have been run over by the spike wheels of justice, so to speak, at the table because a lot of times the people who are making the decisions are not affected.

“The Central Park jogger case happened and the way it was taught in school was that these were evil people who did this evil thing and people learned that,” Salaam continued. “We figure out how to fight, [then] they change the laws, they kill us, [and] they try to create a situation that is so unbearable that we capitulate and say, ‘okay we will be the oppressed.’ but we who believe in true freedom, justice and equality know that there’s a better way.”

Legend routinely supports progressive prosecutors looking to change their jurisdictions with thoughtful reforms to reduce incarceration and wrongful convictions, and he emphasized its importance.

“We focus so much on electing progressive prosecutors because they have so much discretion about how the law is applied—what the charges are, what the bail is set at, what the negotiations will be like when it comes to plea bargaining,” he said.

They also discussed the issue of the formerly incarcerated re-entering society.

“When I think about being a return citizen for a crime that I didn’t commit … it’s so easy for a person who’s been run over by ‘the spike wheels of justice’ to then go into a life of crime. I think about the wording. It used to be called the ‘correctional facility’—people went to a place to get a behavior corrected, to pay their debt to society and then to come back to society to participate. That’s the part that’s meaningful and important because once you deny a person the opportunity to participate. then they turn back,” Salaam said.

“We have to look at them as part of our human capital where our society is stronger if we make the most of our human capital … These people could] have the next great idea, have a small business that will employ people, who will be great employees that can help build a company and that’s why we started ‘Unlocked Futures,’” he argued.

Dr. Salaam also discussed his book, Punching the Air, which he co-authored with national book award finalist Ibi Zoboi. “Punching the Air was really my attempt to really talk about the criminal justice system and how we can make some changes, but also talk about life in America,” he explained.

He shared a piece called “Clone”: “Ever since that day in the fifth grade, my teachers watched me so hard, so close that I felt like I was trying to break out of prison, even though it was just school. Every dumb thing I did, they thought it was because of trouble at home—an absent father, a tired mother, not enough books, not enough vegetables, not enough sleep. They believed those lies about me and made themselves a whole other boy in their minds and replaced me with him.”

As part of the University of Pennsylvania Carey Law School’s yearlong colloquium, “Achieving Racial Justice,” the Quattrone Center will host another virtual event, titled “Rescuing 911: Opportunities for Reform in Police Dispatch” on January 27 at 12:00 p.m. E.T., where they will hold a conversation with international experts in emergency dispatch to discuss improvements that can be made across the country to generate better outcomes for community members and police.

Evie Sun is a third-year student at UCLA, studying Sociology. She is from the East Bay Area.