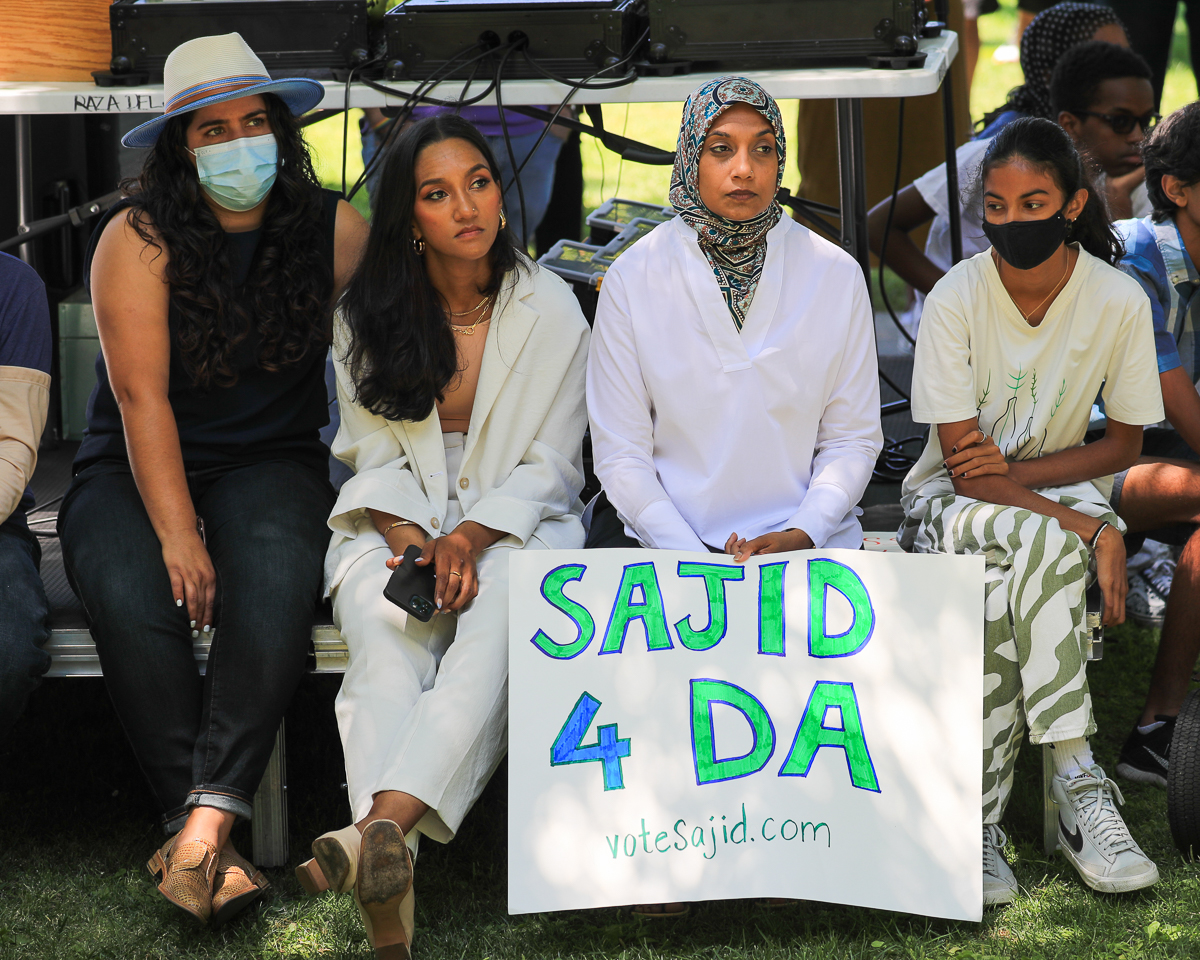 In 2018, there were a number of progressive candidates for DA in California that emerged, but ultimately only Diana Becton of Contra Costa was successful.  That was before a wave swept through the country by 2020, when progressive DAs were elected in many areas, including in most big cities.

When Sajid Khan announced on Sunday, that meant there were at least six progressive DA challengers for 2022, including in many of the largest counties—Sacramento, Alameda, Santa Clara, Riverside and Orange Counties.

But as we have seen, many of those already elected are under fire.  Larry Krasner, however, despite being in the crosshairs, won overwhelmingly in May.  Chesa Boudin (SF) and George Gascón (LA) have found themselves facing potential recalls.

Part of the issue is a perception fueled by a combination of far right interests and complicity by local and even national media that there is suddenly a crime wave.

So far at least—unlike in the 80s and 90s—reformers are actually fighting back rather than lying down.  But a lot could depend on what is happening with the crime rate and what will happen in the

The San Francisco Examiner last week ran an article reporting that Boudin in San Francisco  “prosecutes fewer shoplifters than [his] predecessor.”  But beyond the stark headline is a lot of uncertainty.

For one thing, the paper reported: “Prosecutors filed charges in 116 of 266 cases presented by police involving petty theft in 2020, compared to 450 of 647 cases in 2019, according to the data provided by the District Attorney’s Office.”

But while that shows that they filed a lower percentage of cases, it also shows the number of cases fell by more than half from 2019 to 2020.

What does appear on the rise are “organized retail theft cases,” which went  from 25 cases in 2019 to 43 last year.  But there, Boudin prosecuted about the same percentage of cases as his predecessor.

After a discussion where there was an acknowledgement that crime was not, in fact, going up, one of Chesa Boudin’s critics pointed out that the real problem was these large, brazen burglaries.

“We saw what happened at Neiman Marcus on Monday,” Supervisor Ahsha Safai said, referring to a viral video of thieves bolting out of the Union Square store with luxury handbags. “I have personally witnessed people going in to drugstores with bags and emptying shelves. That is what is increasing.”

But if that’s the case, how is that on Chesa Boudin and his policies?

One area where the data is clear—murders are up from what they were pre-pandemic.  Contrary to some polling however, they are still near 40-year lows and well below the peak.  (Polling last week showed 57 percent of the public erroneously believed that violent crime was at a 30-year high, when the opposite is nearly true).

Jeff Asher, a consultant at Crime Analytics, tweeted, “The change in murder relative to last year is dropping in cities with data. A few weeks ago it was +22%, last week it was +18%, now it’s +16%. Largely reflects cities entering the time last year when murder surged (murder is down in Chicago, for example).”

Columnist Radley Balko tweeted, “The murder surge is slowing down. And in some places, like NYC and Chicago, there are early signs it’s reversing.”

As Chris Geidner tweeted, “The problem is that the irresponsible reporting leads to the belief that crime is at all-time highs, which leads to more coverage, which leads to government overreaction, and we’re back at mass criminalization.”

How is that going to affect DA’s races?

As we saw in the New York Citys Mayor’s race, Eric Adams won a narrow victory.

The media narrative is that he was Black but as a former police officer, he “rejected calls to defund the Police Department and pledged to expand its reach in the city.”

LIsa Lerer of the NY Times writes: “His appeal adds evidence to an emerging trend in Democratic politics: a disconnect between progressive activists and the rank-and-file.”

The NY and national media used this is a cudgel to hammer progressives (for those who want to argue that the media is liberal, this emphasizes that they are less liberal and more establishment and may lean center left, but are by no means progressive).

Alvin Bragg will become the first Black DA in Manhattan’s long history and the civil rights attorney ran on a progressive platform.

This despite the fact that the four staunch progressives split their vote.  Add up their vote and they have about 51 percent of the overall vote, and the strongest mainstream candidate Tali Farhadian Weinstein finished with just 30 percent despite spending twice as much as the four progressives combined.

Keep in mind this as well.  The Manhattan primary happened in June of an off year.  That represents the lowest of the low in terms of turnout.  The people that drop off tend to be people of color and other infrequent voters.

It is important to note that this was a Democratic primary and that the NY DA’s race might be seen as the beginning of a pushback on crime—but still, the result, especially given the split and resource disadvantage not to mention the result in the mayor’s race, remains encouraging.

The Santa Clara race figures to be interesting.  Sajid Khan, a public defender, laid out on Sunday a hard reform platform.  He will face Jeff Rosen, who would seem to be more of a moderate.  Santa Clara is one of the larger counties in the state of California and bears watching.

Another race I have been following closely is in Orange County, where Pete Hardin is taking on incumbent Todd Spitzer.

Of note, Spitzer in 2018 ran as a reformer against long-time incumbent Tony Rackaukas and then, Spitzer moved hard right.  He has taken to going on Fox News and Newsmax and has repeatedly attacked Hardin as being tied to George Gascón and Chesa Boudin.

More than a year before their primary, Spitzer was already attacking Hardin by name on Twitter.

Yesterday, his tweet featured a graphic of a homeless camp and the message read: “Pete Hardin’s soft on crime policies and radical reforms will have Orange County looking like LA or SF in no time. As DA, I promise that under my leadership we will never let that happen!”

It is interesting to see him move hard right in a county that has been increasingly purple in recent years and, in fact, voted by double digits for Biden.

The increase in murders and media coverage has definitely emboldened opponents of criminal justice reform.  So far, the reformers have not backed down, but time will tell whether the trend is an anomaly due to the pandemic or a reversal of a long, downward trend in crime.

17 thoughts on “Commentary: How Will Changing Landscape Impact Reformer DA Candidates in 2022?”