By Jordan Varney and Emily Dill

This article is one of a multi-part series on a church in Davis, California, called Grace Valley Christian Center. Part 1, Part 2 (this one), Part 3.

P. G. Mathew, the pastor at Grace Valley Christian Center (GVCC), was born in India. According to one source, he came from “a long line of Indian Christian pastors” and was taught from childhood the “superiority of his pedigree.” The source relayed a story where Mathew’s father “discouraged him from playing ball” because he should not play “games which were considered unspiritual.”

Mathew originally started out in graduate school for chemistry but “he felt called by God to preach the gospel,” a source said. Mathew collected multiple theological degrees, including one from Westminster Theological Seminary. 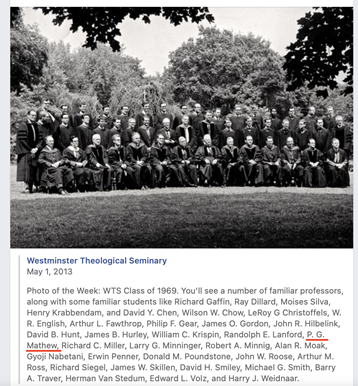 According to a source, Mathew came to Davis in 1973 at the request of Bishop Ronald Coady, pastor of Trinity Cathedral in Davis, to teach at the newly inaugurated Saint Justin’s Theological Seminary. It appeared Mathew came highly recommended from his position in Vancouver where he led a youth group.

However, Bishop Coady apparently later shared with people that the job in Vancouver had “begged him to hire [Mathew] because his harsh ministerial habits were destroying the group and causing division among the church leadership.”

Mathew seemed to follow a similar behavioral trend in Davis. In 1974, at the request of some seminary students who were unhappy at Saint Justin’s, Mathew started a charismatic bible study. This later became Davis Evangelical Church (renamed to Grace Valley Christian Center in the mid ‘80s). According to a source, he adopted a church government structure that “gave him all the real authority and the members none.”

Someone described the changing nature of the church as “over time, the church would become more and more authoritarian, controlling and centered on the honoring and exaltation of the pastor, demanding absolute and unquestioned obedience from its congregants.”

An expert on Indian Christianity that the Vanguard talked to explained this style of Christianity. “There can often be a real cultic personality surrounding charismatic pastors,” they said, “and that can be in almost any denomination but especially in more conservative denominations where there’s less suspicion of strong structures of hierarchy and authority.”

When asked about the type of authority at GVCC the expert said, “A pastor who is well trained, has several seminary degrees and who knows the bible well, may also have a very paternalistic sense of his relationship to less educated people in his congregation.”

In the late 70’s, P. G. Mathew joined the fledgling church to the Shepherding Movement. The Shepherding Movement was, as explained by a source, “a large group of churches across the United States that formed a vast hierarchy under five prominent pastors in Fort Lauderdale. The movement stressed ‘serving and honoring’ leaders, ‘covenant’ relationships with (for the most part) unquestioned obedience.”

Pat Robertson, conservative Christian Televangelist, wrote an open letter in 1975 lambasting the Shepherding Movement. He called the movement “an unnatural and unscriptural domination of one man by another.” He said the “very sincere brethren” in the movement he ran into used “cultish jargon.”

In his open letter, Robertson described how he learned “wealthy Christian friends were being forced not only to divulge the most confidential details of their financial and family life, but were being urged to pour their resources [sic] into the pockets of the head ‘shepherds.’”

Once a shepherd is picked, Robertson reported that following them is “more binding than a marriage.”

Robertson said, “those ‘submitted’ are under the control of their ‘shepherd’s’. [A former employee] tells of a pregnant woman who could not visit a gynecologist until her ‘shepherd’ approved it. ‘Another couple were told by their ‘shepherd’ to stop living together as man and wife. ‘Sheep’ cannot buy a car, a home, take a trip, a vacation, or engage in any other activity of any magnitude without permission of their shepherd.”

Robertson quoted a devotee as saying, “If God Almighty spoke to me, and I knew for a certainty that it was God speaking, and if my shepherd told me to do the opposite, I would obey my shepherd.”

After receiving criticism, the founders of the Shepherding Movement began to disavow what they had created. Eventually the leading organization—and the accountability structure it maintained—was disbanded.

Dismantling the top of the Shepherding Movement, however, did not appear to take apart the many churches across America that used this structure, including GVCC.

As one former member of GVCC described it: “[Y]ou have someone in absolute authority”; when the larger Shepherding Movement disbanded “we lost the only accountability that we had” and they ended up with “your classic narcissistic personality cult.”

Over time, GVCC grew. GVCC gains members in several ways: they recruit families of children from their school, Grace Valley Christian Academy; they have a college group at UC Davis called Grace Alive; and they encourage their members to marry each other and have babies.

As one source explained, “For years, the source of new members was college students, and that’s the way that it was in the very beginning…but what they noticed is that these kids would graduate from college and leave to go elsewhere, so they realized the way to keep these students in the church is to get them married, and it really really works.” Another source explained that “love bombing is big for recruiting, especially on the UC Davis campus.”

A source provided a screenshot of the document Grace Alive members use to track who is responsible for retaining new members, explaining “whenever a college age visitor comes to a club meeting on UC Davis campus or a church service at Grace Valley a college member of GV is assigned to reach out, befriend, and recruit them.

Each visitor is assigned a primary and a support person. The primary takes the lead on reaching out and the secondary follows the primary’s lead and offers additional outreach support. To clarify, the visitors have no knowledge of this because only the members who have been baptized and signed the church contract are involved in this.”

In terms of accountability to the leaders of GVCC a source said that “each week the primary and support people have to report how their outreach efforts are doing and what they are learning about their assigned visitor.”

A source emphasized the control the church has over Grace Alive by stating, “As a UC Davis campus student organization, Grace Alive is required to operate independently of the church with which it is affiliated….Two former Grace Alive presidents revealed that they were not elected by the members of Grace Alive, as dictated by University policy, but were appointed by leaders of the church.”

Once GVCC has new members, it employs many methods to retain them, including, day to day control/submission to the church, signing a life covenant, threats of being shunned by the community for leaving, and verbal, emotional, and spiritual abuse. All of these tactics will be detailed in future articles.

P. G. Mathew, sources estimate, is in his late 80’s and the line of succession for the church is not completely clear. P. G. Mathew has a son and a daughter. The son, Evan, runs one of GVCC home groups but is not listed as a minister on the GVCC website.

Mathew’s daughter, Sharon, is the principal of Grace Valley Christian Academy. Her husband, Gregory is listed as a minister on the website. There are also other ministers that have been with the church since the founding that are close to P. G. Mathew.

Many sources agreed that Sharon is the natural successor to her father except for one thing, she’s a woman. One source explained, “Since GVCC claims to be a conservative Reformed church, women are not supposed to hold positions of authority over men.”

One source stated, “People presently at GVCC [sic] might be wondering ‘why does Sharon have so much power?’ after hearing so many years about the necessity of male church leadership.” Sharon, from reports, seems to be made in her father’s image and runs the academy similarly to how her father runs the church.

One source said that it is made clear to children at the school that orders are to be obeyed “immediately, exactly, and with joy.” They went on to say that “the worst thing that has ever happened to that school was her becoming the principal.”

The Christianity expert the Vanguard interviewed suggested that “in churches that are characterized by charismatic leadership, there is no clear heir apparent; they tend to break up afterwards particularly if they are a large church like this. Another possibility is they break up into smaller churches following the junior pastors.”

The former GVCC members the Vanguard talked to postulated who might succeed P. G. Mathew. One source said, “Many former members of GVCC are speculating that the church leadership will eventually pass to Sharon’s husband, Rev. Gregory Broderick, who, after marrying Sharon, was baptized and put on the fast track to leadership.”

This article is one of a multi-part series on a church in Davis, California, called Grace Valley Christian Center. Part 1, Part 2 (this one), Part 3.