Davis, CA – For a moment it looked like the UC Davis police station was engulfed—fortunately it was just smoke from a flare and a cardboard pig.  The graffiti on the sign and sidewalk were real enough—if the police knew what was going on, they wisely stayed inside and avoided any confrontation with the students.

The overall event marked the 10th Anniversary of the day in 2011 when Lt. John Pike and Officer Alexander Lee pepper sprayed a group of seated protesters.  Only two of those actually pepper sprayed were on hand on Thursday to

The speeches touched on a combination of anger but also celebration at progress, and most were pushing for the abolition rather than the reform of police.

“We are gathered here today because 10 years ago, a number of students seated right here on the quad were attacked by police,” said one of the organizers.  “So brutally, so horrifically, so casually that it scandalized the globe.” 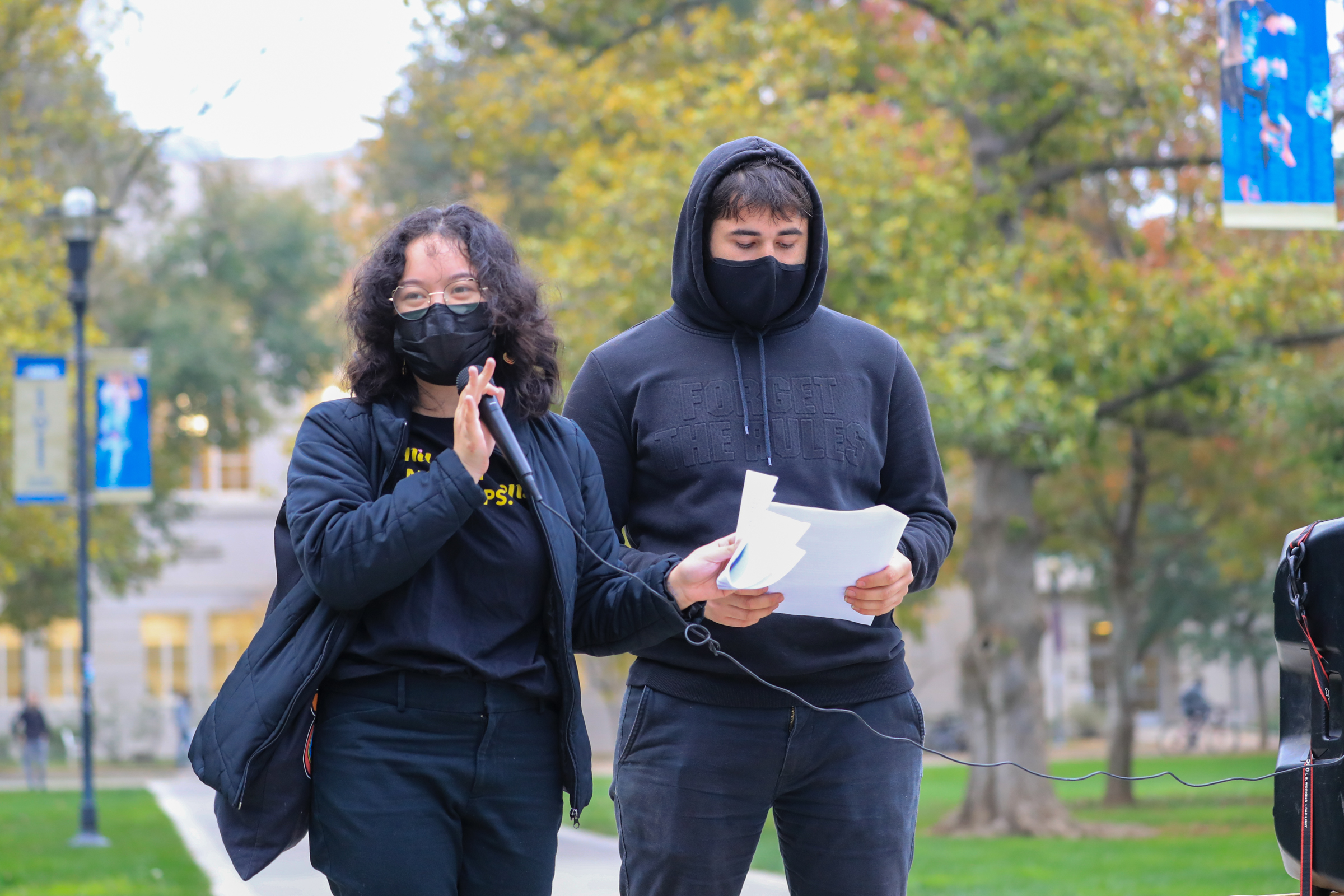 He mentioned that they were in here in solidarity with the movement for police abolition that continued last summer with the George Floyd uprising.

He added, “We are here to get cops off campus.” 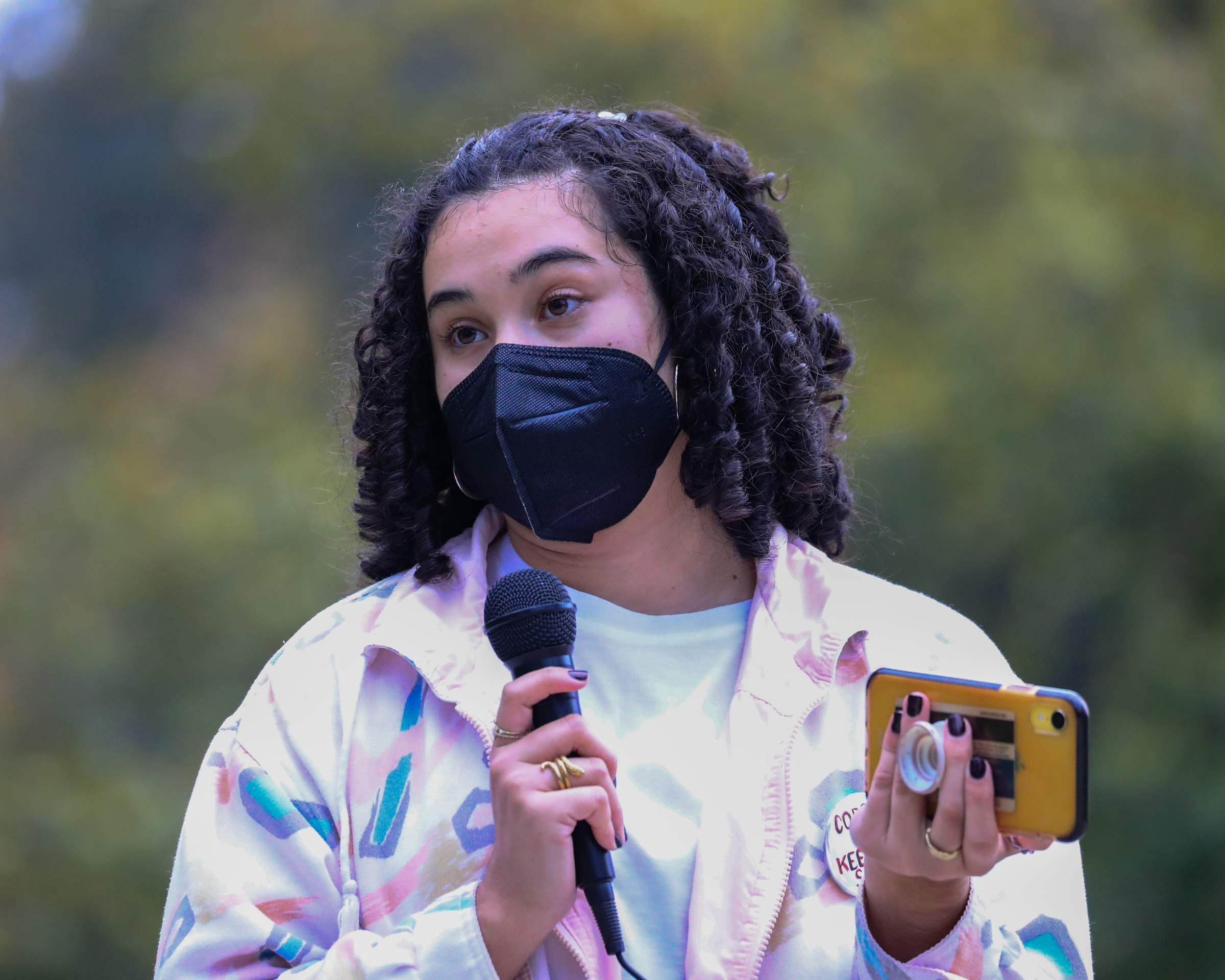 Valeria Cantor, Racial Justice Now Campaign Chair, said their goal is “to abolish the school to prison pipeline and empower students of color during their time at any UC campus. This campaign also strives to serve historically underrepresented students, including those who have been formerly incarcerated and support them in their pursuit of higher education.”

Cantor is an immigrant, having grown up in Costa Rica, and she was in culture shock and one of the most shocking things she saw “was to see a cop car at a high school.”  She said, “There’s no law enforcement allowed on institutional educations in Costa Rica. So, coming here, I was really confused. I was baffled. I really could not wrap my head around it.”

She went down a list of problems with cops on college campuses, including the pepper spray incident at UC Davis.

“The presence of police on campus, it’s unwarranted,” she said.  “I read an article that included an opinion, and this student was talking about how they would feel less safe without the police on campus.”

She added, “The presence of police officers that could cost me my life does not make me feel safe.” James Martel, a professor of Political Science from SF State University and the San Francisco president of the California Faculty Association, spoke as well.

He described his frustration trying to deal with police abolition on their campus.

“In this neoliberal times, the police departments on various campuses know that we’re onto them, that we’re after them. So they have managed, they’ve learned the language of equity and diversity and all that,” Martel said.

He noted that one thing they are trying to do is have police not deal with people who are having mental health issues. 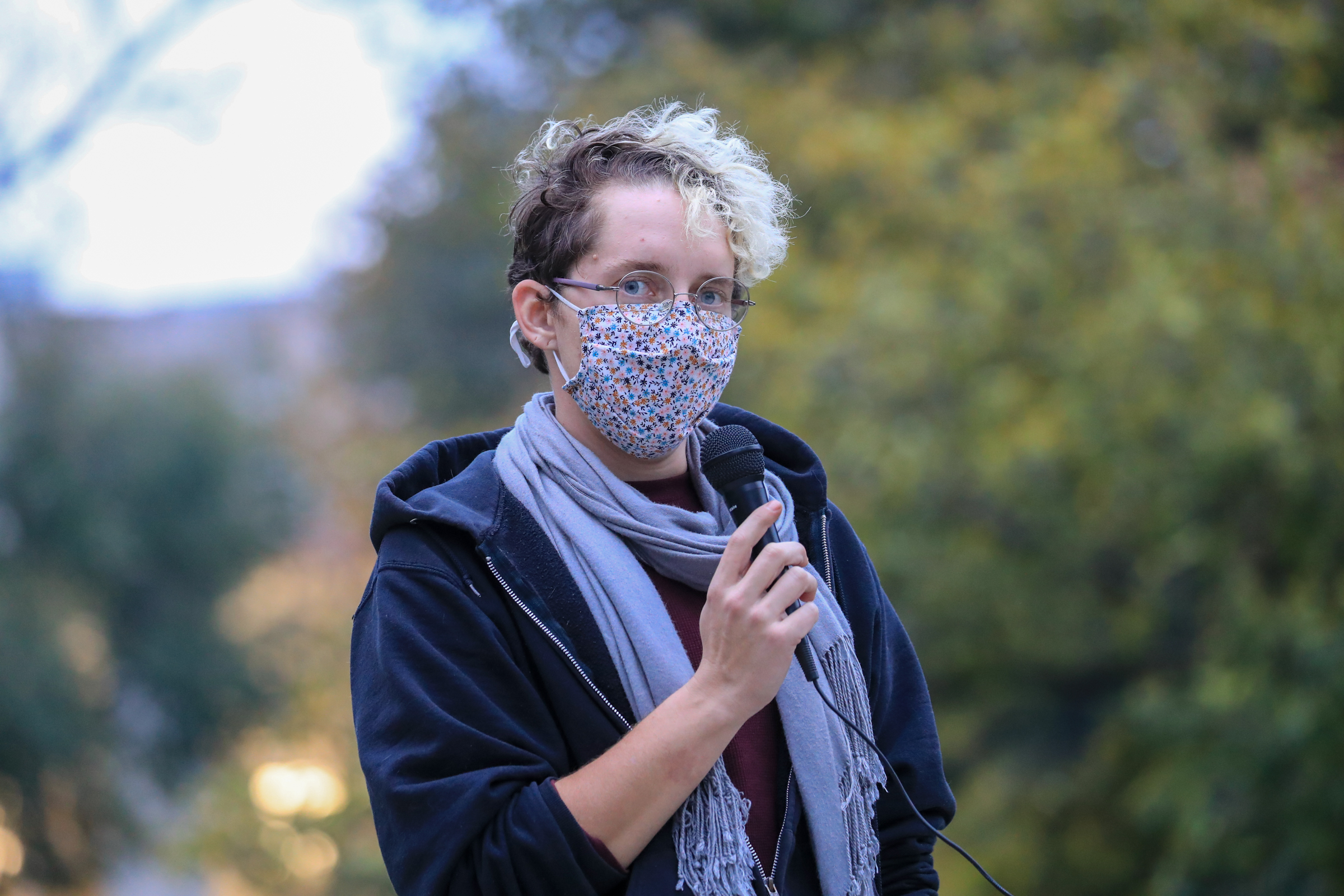 Dorian was one of the student who has pepper sprayed in 2011.

He said that she couldn’t think of anything salient to say, and kept it brief, saying, “now more than ever f- the cops, f- the admin, and abolish the police in the UC System and powers to the indigenous people of California.” 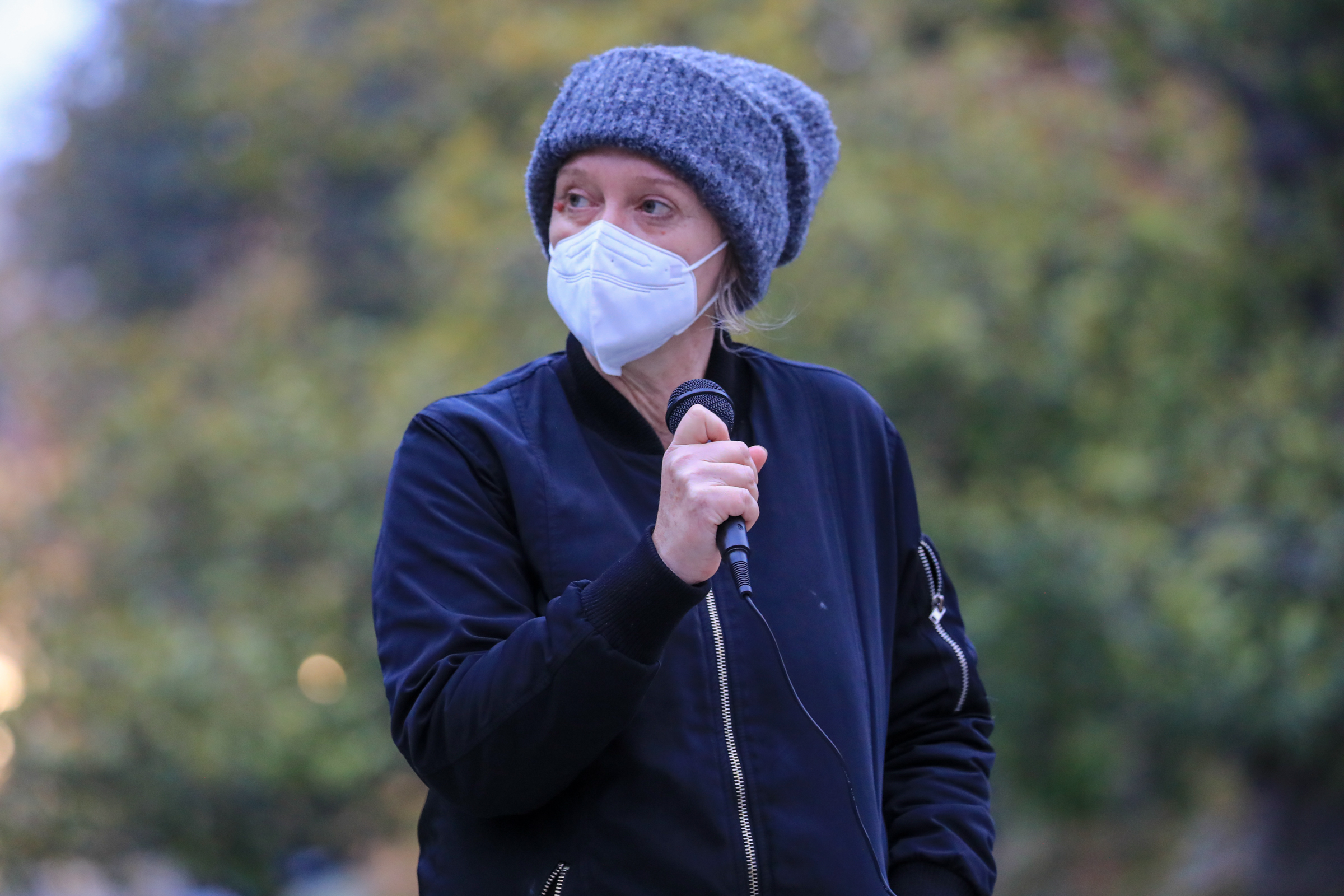 Kristin Koster, a PhD from UC Davis, was on the quad that day, providing emergency medical assistance to the students.

“It’s nice to see this many people out,” she said.  “I think 10 years ago, right around this time of day, this is about how many people we had out, who decided to sit down when riot cops showed up with pepper spray.”

She said, “We have a lot of freedom… we really have the ability to do a lot thanks to the people who sat here on this quad and were pepper sprayed 10 years ago right now.”

She said, “Make the legacy of the pepper spray, the abolition of police from all UC campuses and then it’s, it’ll spread.” 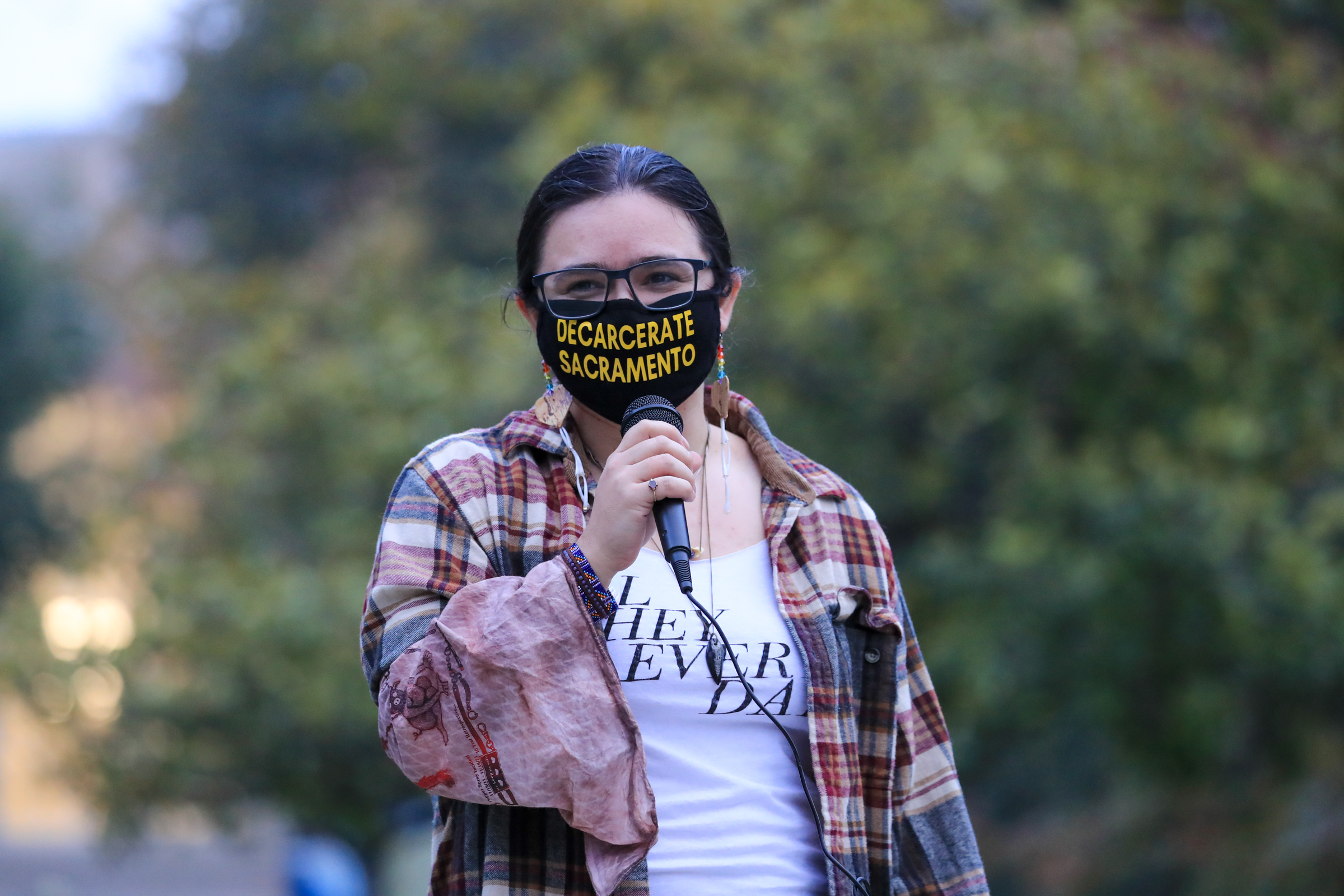 An undergrad in Native American Studies Adnan noted that the UC Board of Regents “are all millionaires, several multi-millionaires, at least one billionaire.”

“Although the number of lecturers is increasing,” he said.  “Which isn’t that convenient because they get paid less.”

He said if you Google the University of California origin, “they use the word revolutionary to describe themselves.  They say that the whole point of the institution was to make it accessible to all.  Apparently by accessibility they mean pocketing students’ tuition. And by all, they mean a handful of high level people in the university system.” 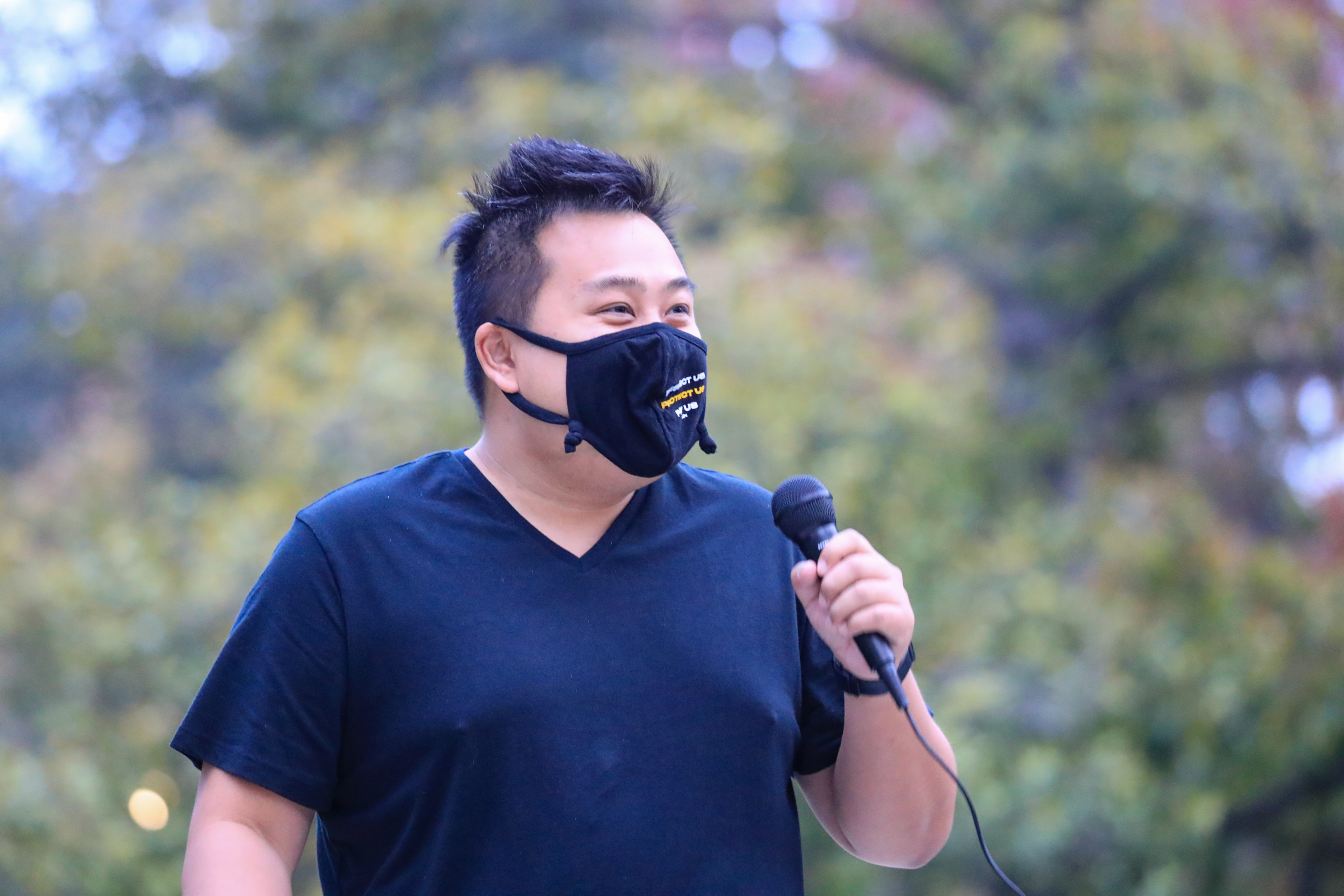 Ian Lee is a union organizer with SEIU 1021 and was pepper sprayed 10 years ago.

“I didn’t want to talk about my trauma for awhile.   The pepper spray incident was profoundly traumatic for me and traumatic for many, many years,” he said.  “I’ve since healed.  The pepper spray incident no longer affects me emotionally, and I’ve grown past it. In fact, for the last seven years, I’ve been working as a union organizer and I’m proud to say I’ve successfully helped thousands of workers, organized labor unions at the workplace.”

First, he said, “in the passive memories that most people (have) within this region, the pepper spray incident is remembered as a ‘misuse of police force or ridiculous overreaction from the police to a student protest.’ He noted, “I’ve sometimes wondered if that, if that was one of the reasons that the video of us being pepper-sprayed went so viral well-to-do white folks were just not able to believe that police assaulted students that was often perceived as a middle-class white university.”

He noted at the time, the Occupy Movement: “The key signature of the occupy movement was that hundreds of thousands of people throughout the world were building these tent cities in public areas to protest economic inequality.”

At UC Davis, the regents were proposing an 81 percent tuition hike for students.

“We knew that was unacceptable,” he said.

He noted, “I venture if we were at the UC Davis Outdoor Adventures, I doubt dozens of riot police would have been called on us.”

Lee said, “Ultimately, the root cause of the pepper spray incident was the UC Regents privatization plan, privatization of the UC and police violence are linked. One enforces the other. And this is true at UC Davis as well as society at large. It is no coincidence that the most policed neighborhoods are also the most impoverished. The police are the enforcement mechanism of capitalist interests.”

His second thought, “We were definitely victims on November 18th, 2011. It took years of my life to fully process and heal from UC Davis police assaulting me and my friends.” 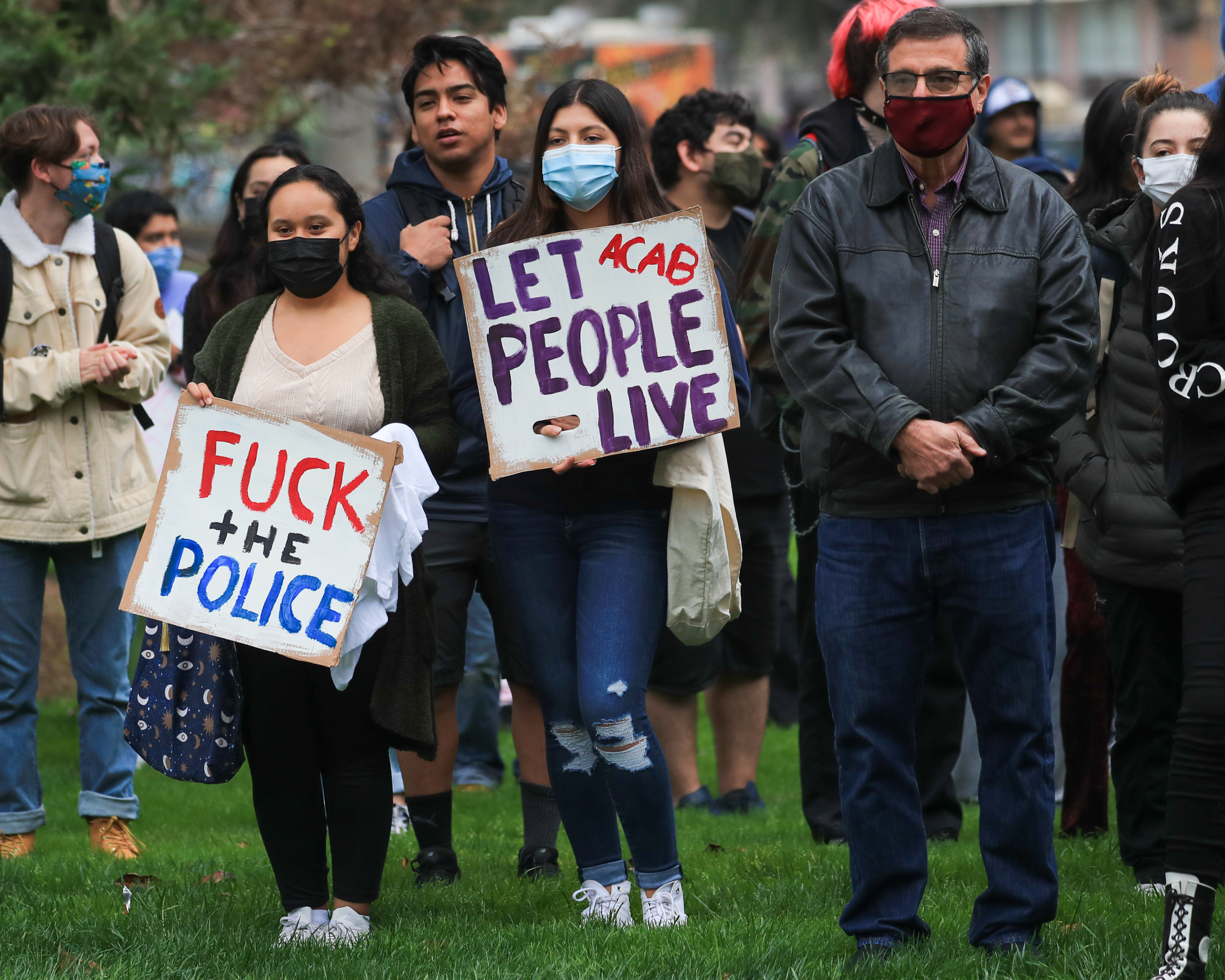 He said after the pepper spray and many of them being taken to the back of police vans, “the crowd became pure rage.  It was so obviously f-ed up what just happened.”

Everyone, he said, came together and “the crowd was able to successfully push the cops off the quad.”  He said, “We were victims that day, but we also transformed into a military force. We made the cops afraid of us. And for a short while, at least, we held the power. We held this quad in the days following the pepper spray incident.”

He said they followed it up by getting US Bank off the campus. 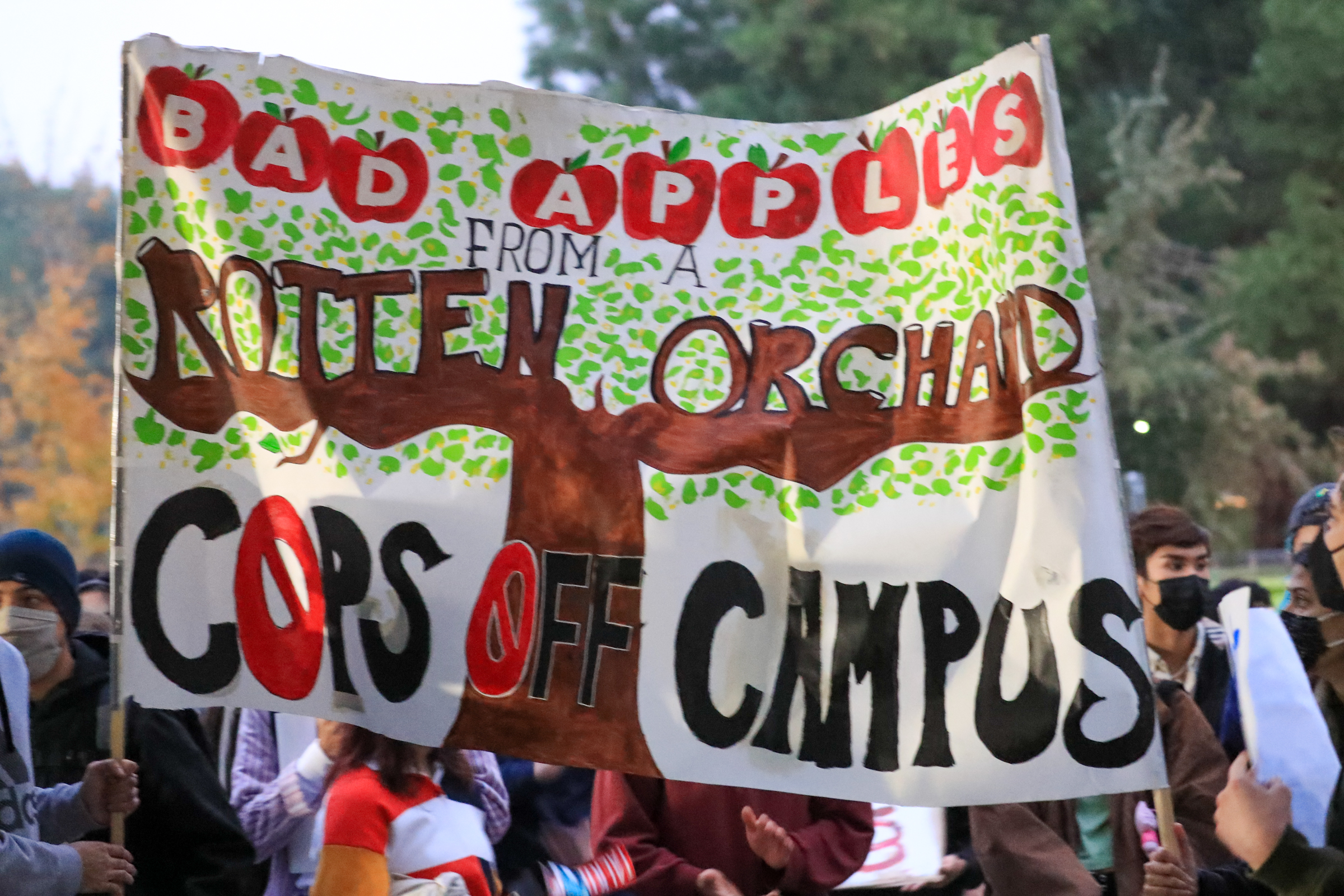 He said, “Following the pepper spray incident, my fellow student organizers and I blockaded the entrance of a US Bank that used to be at the center of the MU, a bank that was paying a million dollars a year to UC Davis to entrap students in predatory private student loans.

“We organized mass student support behind our black tech blockade of the bank, and ultimately forced the UC Davis administration to cut its million dollar contract with US Bank. With our united student power we forced US Bank off campus.” 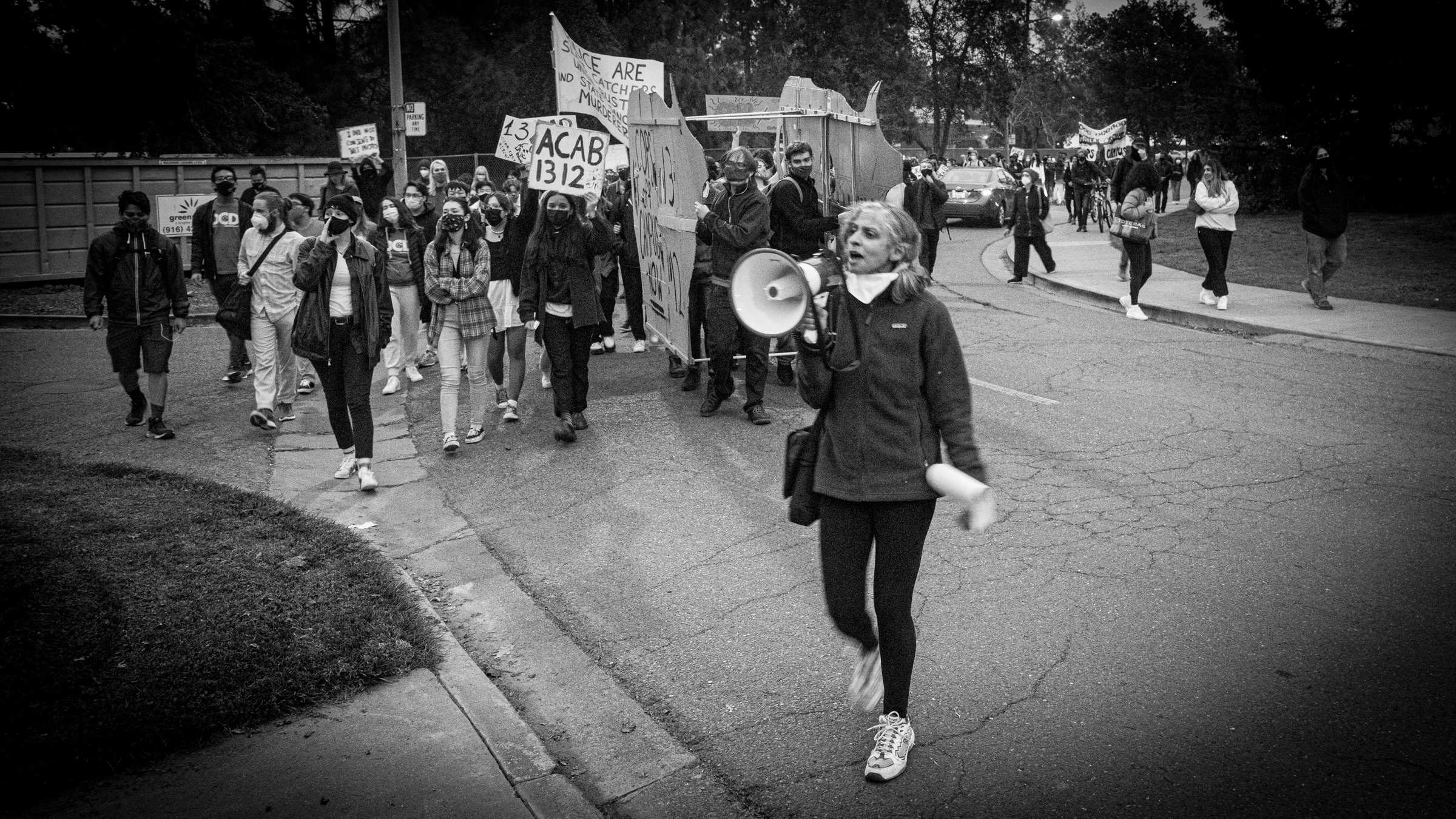 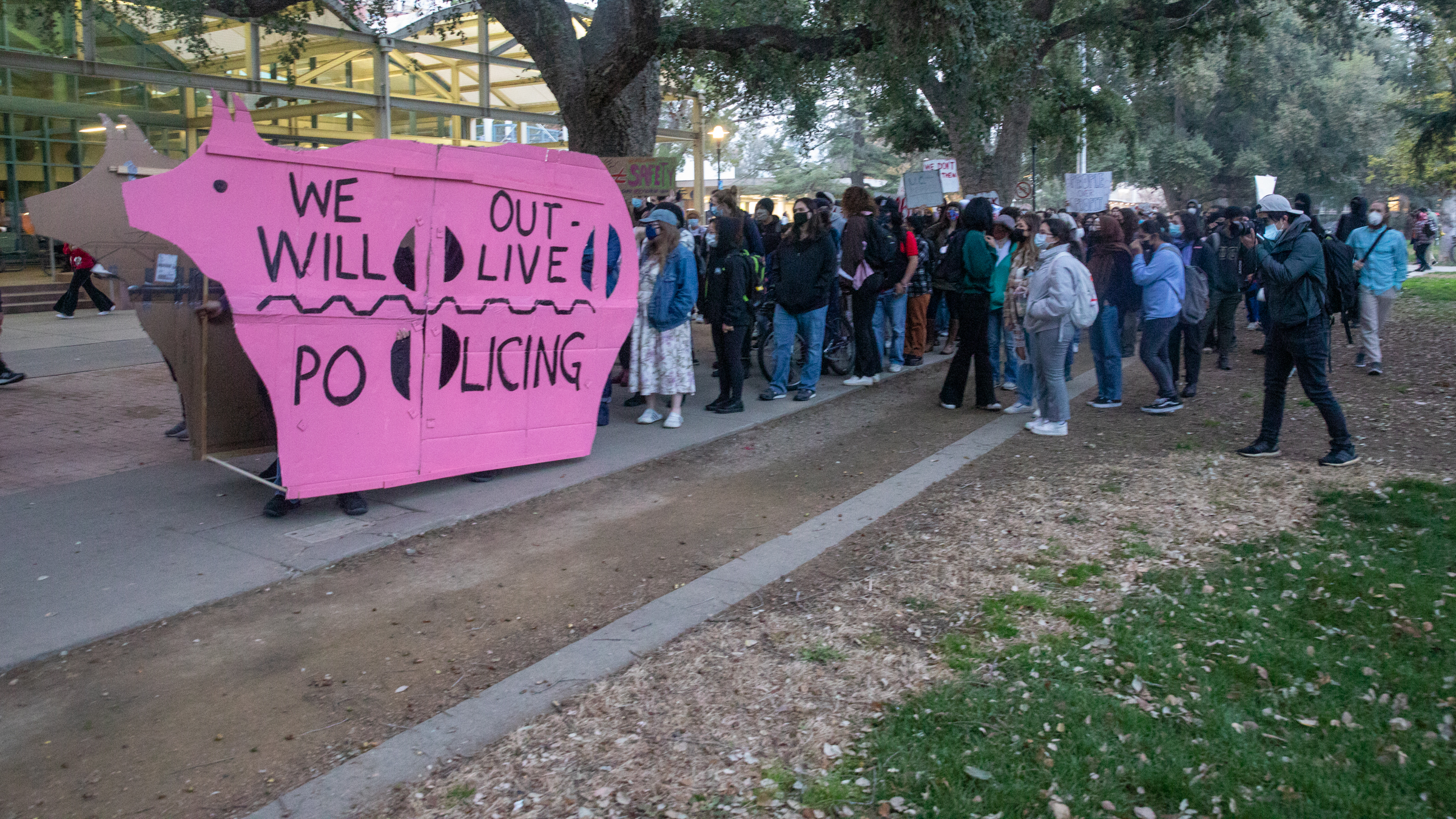 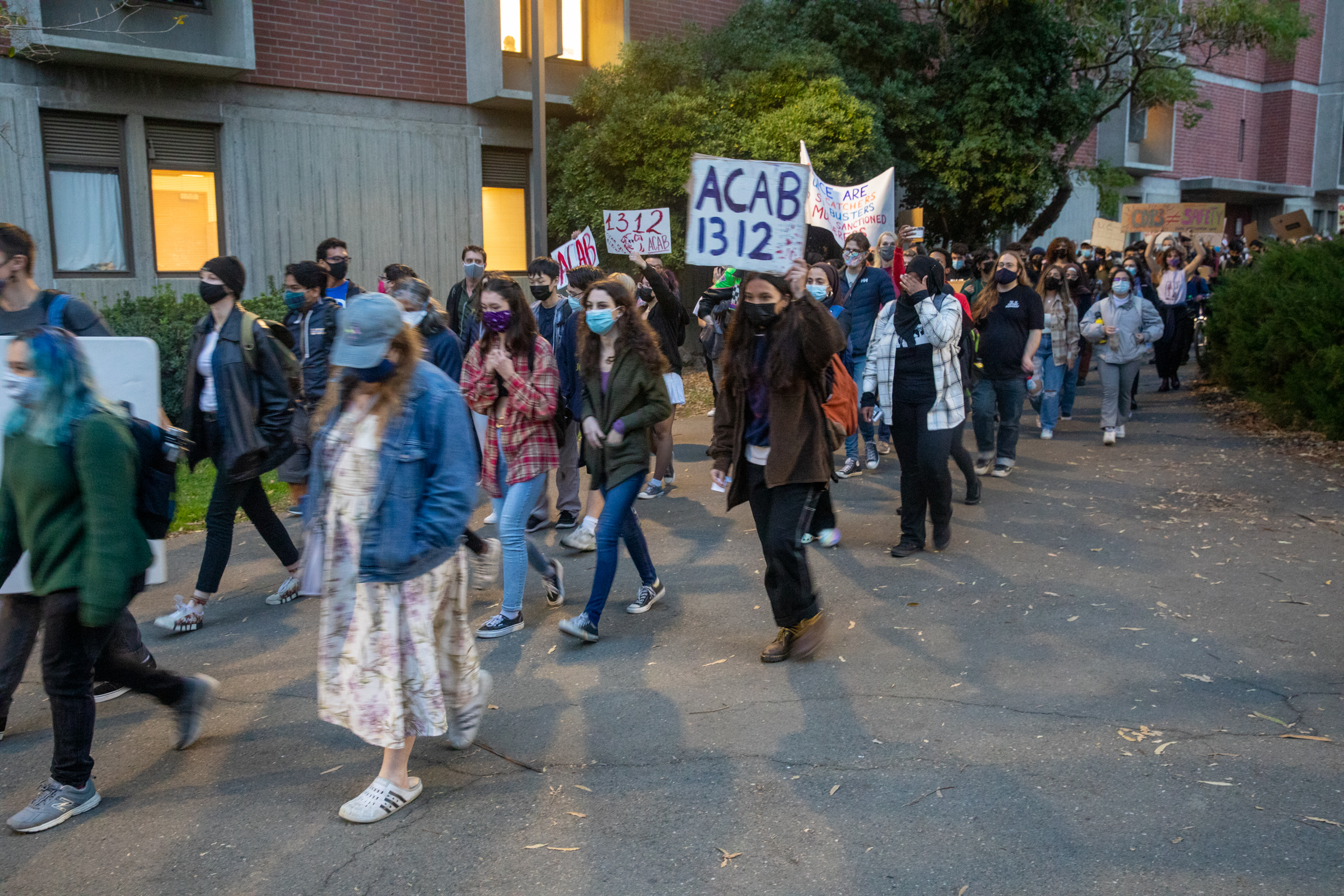 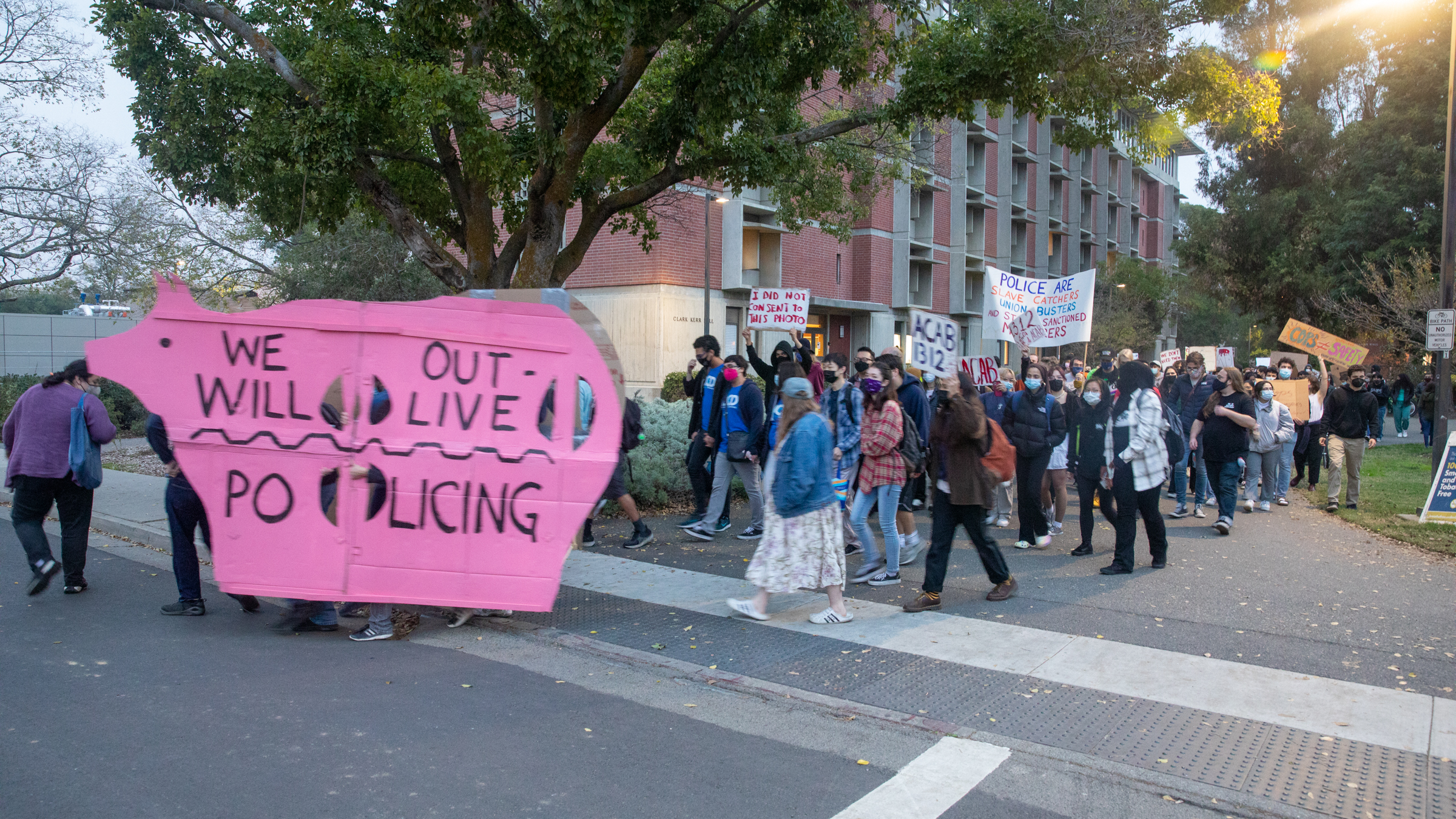 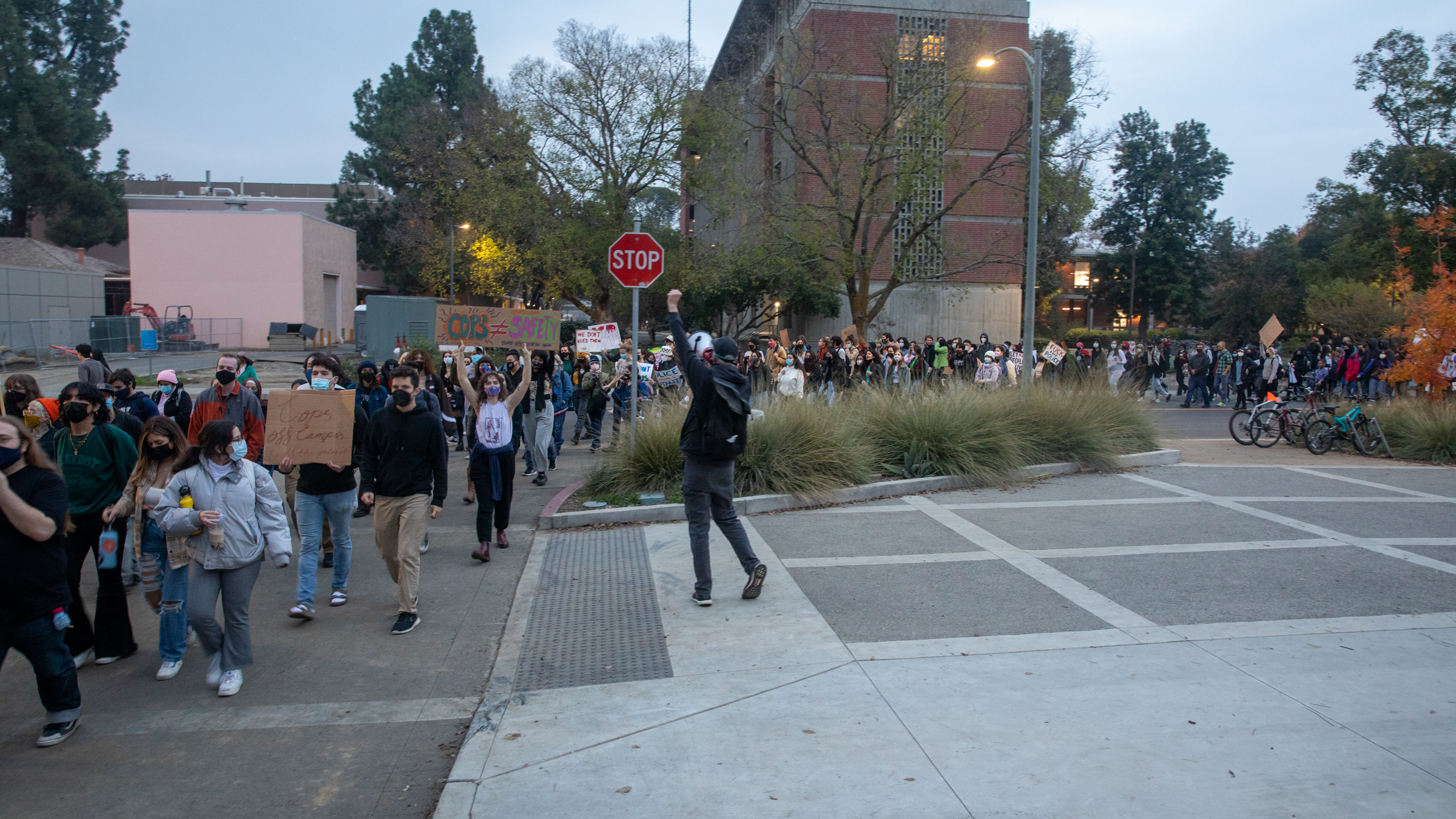 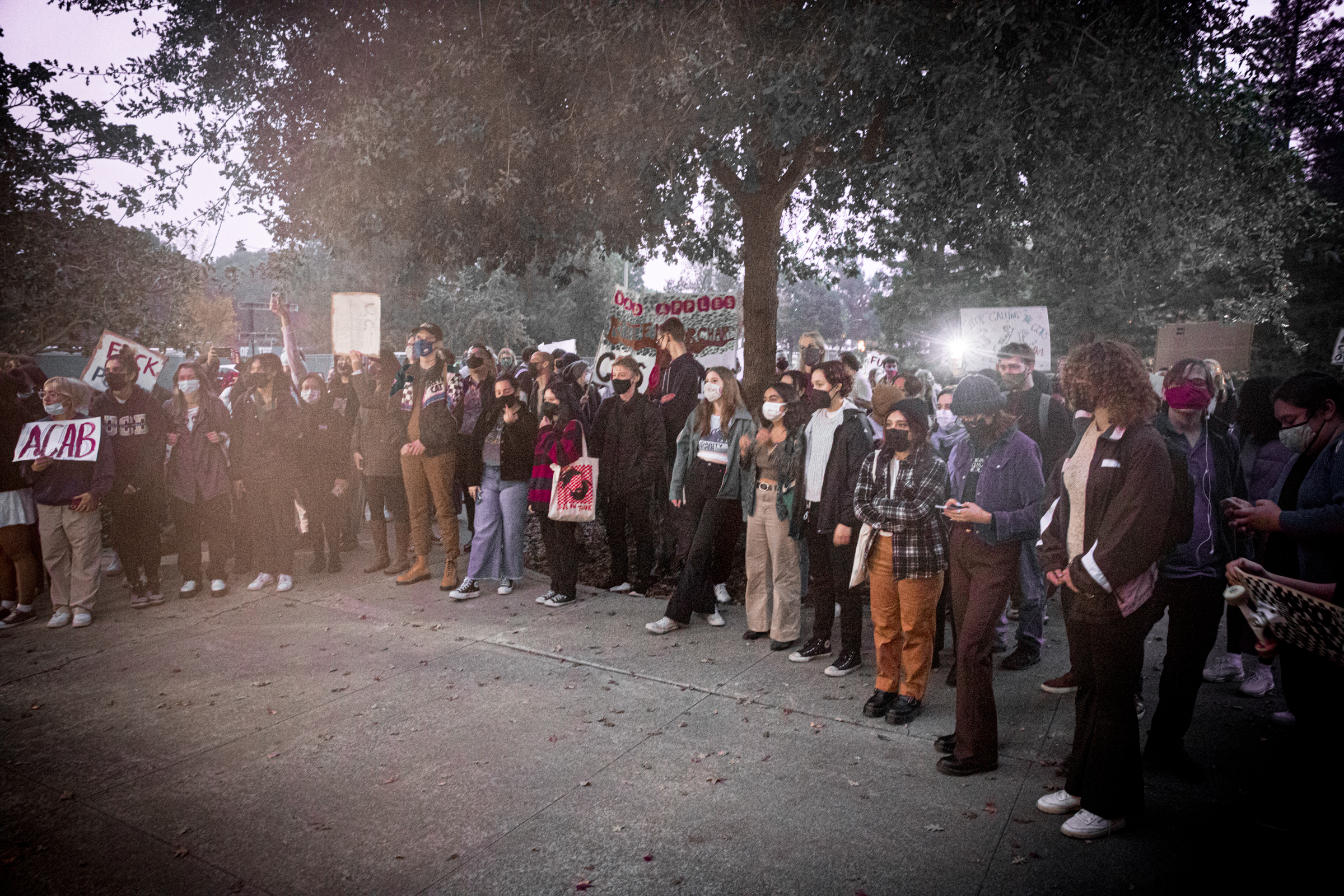 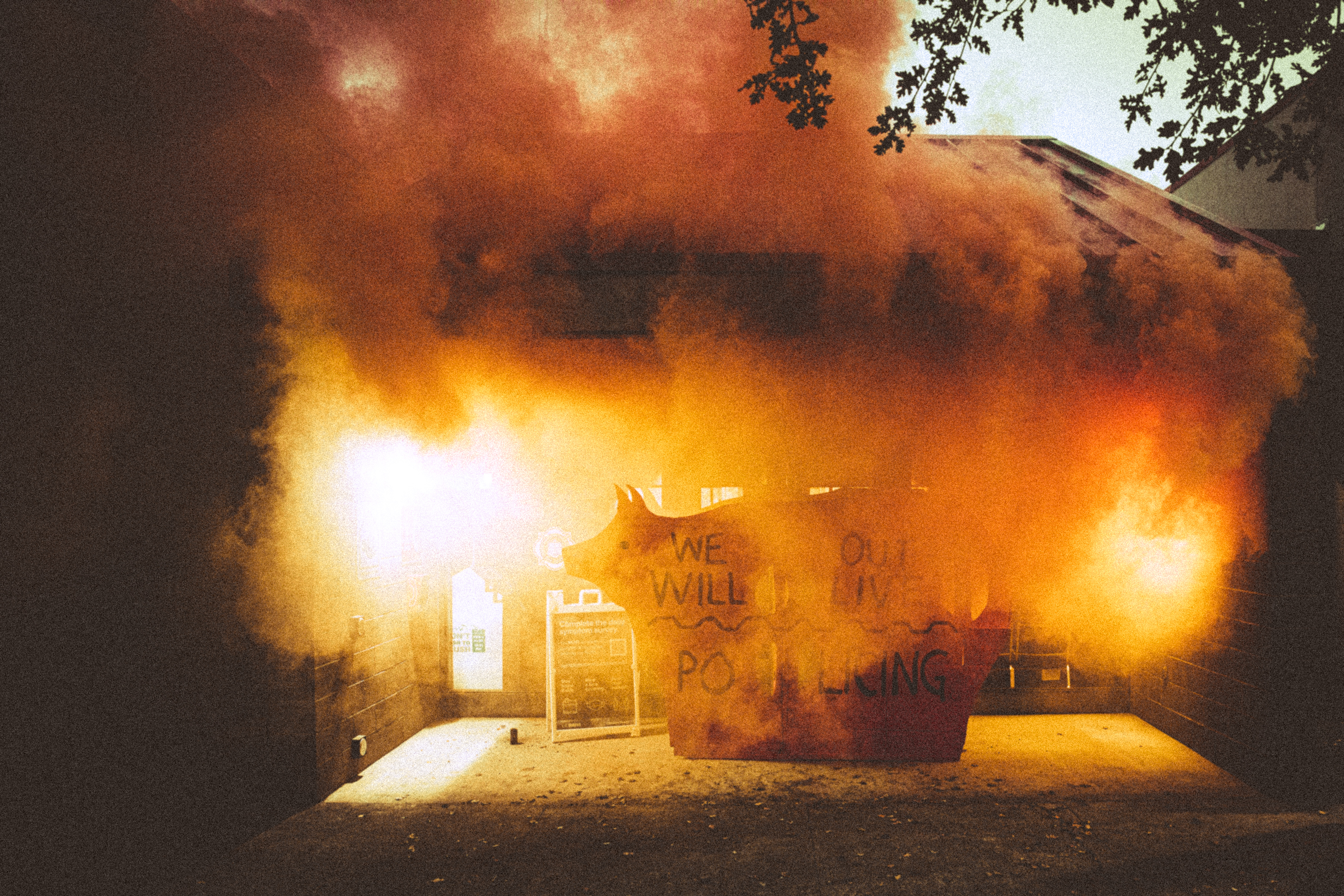 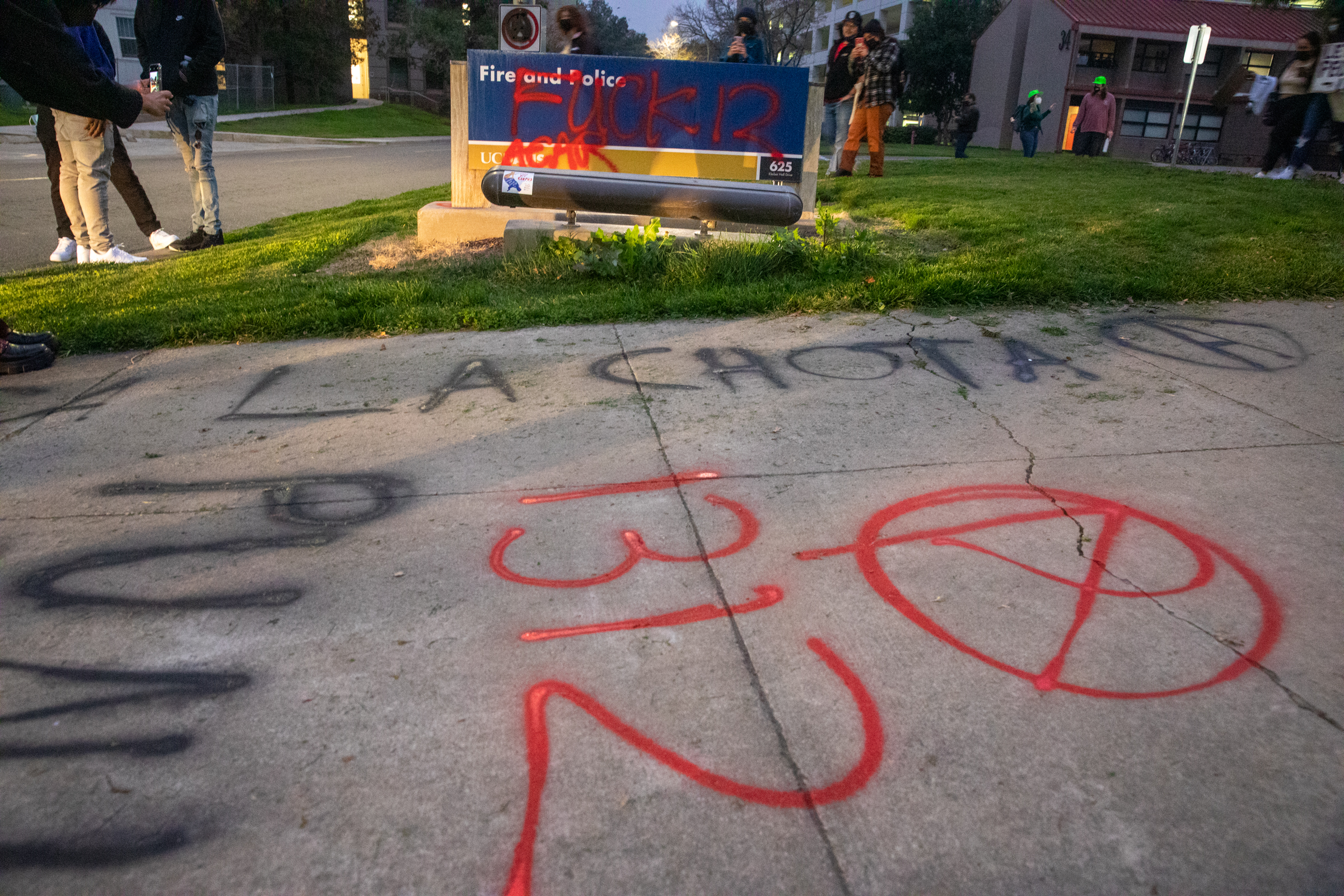 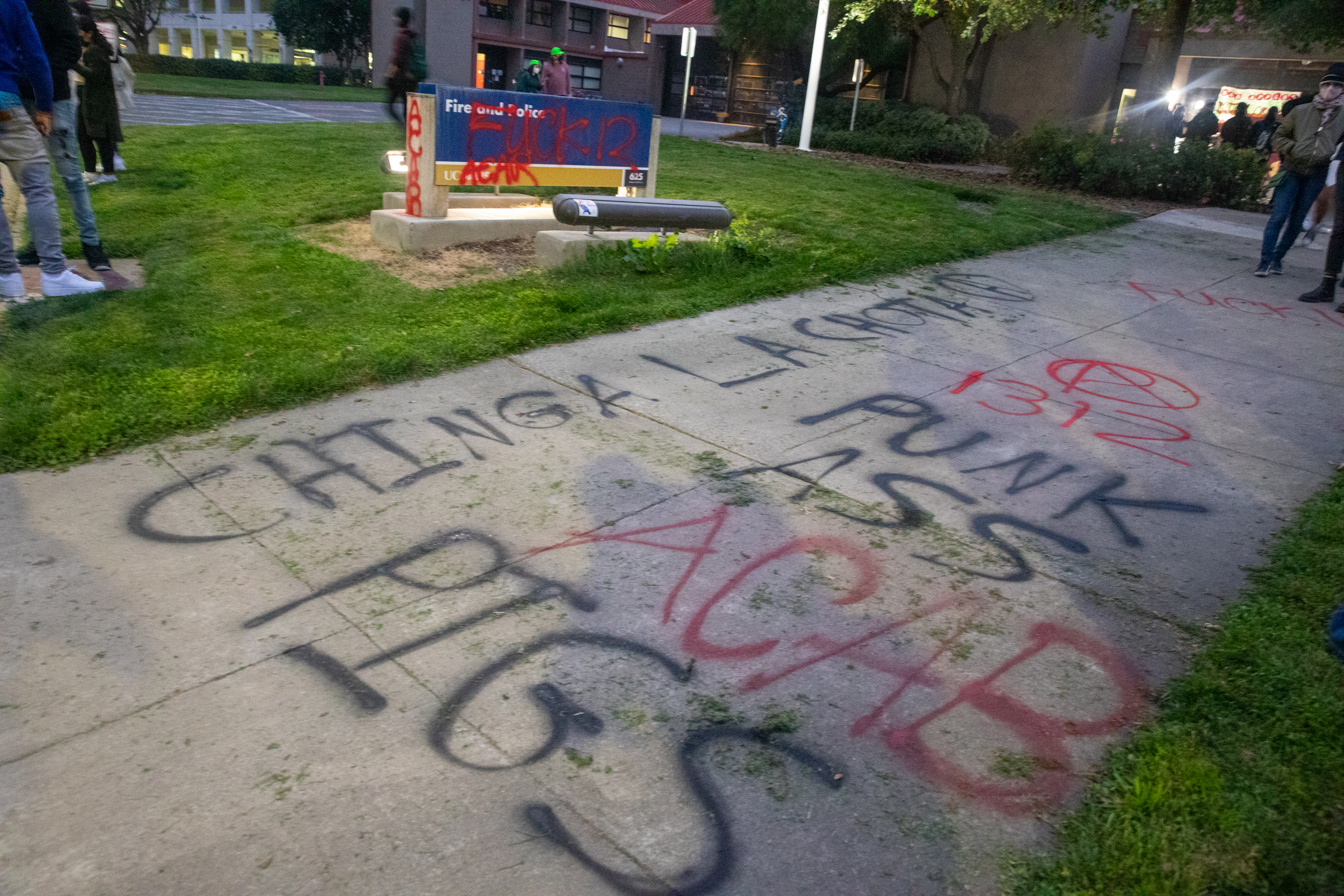 13 thoughts on “Students Remember the 10th Anniversary of Pepper Spray, and Then Storm the Campus Police Station (Reader Beware Photos)”