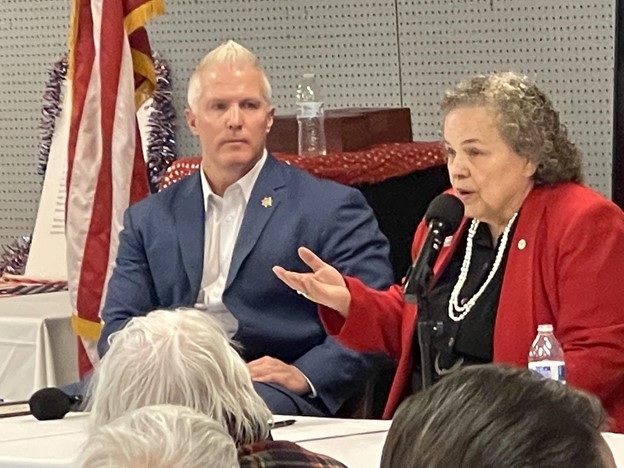 Both candidates — Incumbent Jeff Reisig and challenger Cynthia Rodriguez — have agreed to participate. The forum will focus on candidate qualifications and vision for the criminal justice system in Yolo County over the next four years.

People who want to attend the event are encouraged to register at: https://www.eventbrite.com/e/league-of-women-voters-yolo-county-district-attorney-candidate-forum-tickets-317119110797. Seating may be limited because of placement due to the pandemic. Woodland TV (Channel 21) will be videotaping the event and livestreaming on their YouTube channel.

Reisig, 52, has served as Yolo County District Attorney since January 2007, winning re-election in 2010, 2014, and 2018. Rodriguez, 64, has 40 years of criminal legal experience both prosecuting and defending cases.

Born in the small farming community of Gilroy, CA. Reisig’s father was a businessman and his mother a public-school teacher. He earned a bachelor’s degree in agricultural and managerial economics at UC Davis and law degree at the University of the Pacific. While a student, he volunteered as a legal intern for the Yolo County Public Defender’s Office.

After graduation, Reisig represented farmers and other business owners as a lawyer with the Fresno-based labor and employment firm Jory, Peterson, Watkins, Ross & Woolman. He returned to Yolo County to start a career as a prosecutor with the District Attorney’s Office in 1997.

During his tenure as DA, Reisig has focused on expanding community-based diversity programs to redirect people out of the criminal justice system and launched a data portal to provide access to information from his office. Reisig currently serves as president of the California Association of District Attorneys.

Rodriguez attended UC Berkeley for two years before she transferred to Creighton University in Omaha, NE., where she earned both a bachelor’s degree in English literature and a law degree.

Rodriguez started her law career in private litigation practice in the Los Angeles area. She then worked as a deputy public defender for Orange County, the State of California, and Solano County before taking a job in the employment law unit at the California State Dept. of Corrections, where she managed complex litigation for the agency and prosecuted misconduct by safety officers.

Rodriguez currently works in private practice out of her home office in Winters.