In November of 2011, Maurice Caldwell spoke before the first Vanguard Court Watch justice event on Wrongful Convictions. Just over six months previously, the then 43-year-old Maurice Caldwell walked out of the San Francisco Jail a free man, for the first time since his conviction for second-degree murder in a fatal shooting of an individual named Judy Acosta at the Alemany Public Housing Project on June 30, 1990.

The DA knew of one of the actual shooters, Marritte Funches, at the time of trial.  Mr. Funches was never investigated, never looked for, and never spoken with. Three months after the murder, Mr. Funches fled to Nevada, where he shot and killed a cab driver.  Mr. Funches is currently serving a life sentence without the possibility of parole in Nevada for that homicide.

A jury found Mr. Caldwell guilty of second degree murder, attempted murder, felony discharge of a firearm into an occupied vehicle, and the related enhancements.

He received a sentence of 27 years to life.  While that conviction was affirmed, he never gave up.  He wrote letters to the San Francisco Public Defender’s office and to the Northern California Innocence Project, and both entities began to investigate his case. In 2008, Marritte Funches confessed to the murder and swore that Mr. Caldwell was not involved.

Armed with new evidence and the confession of the real killer, NCIP brought Mr. Caldwell’s case back to the courts.

A judge ruled that Caldwell’s trial attorney was ineffective for failing to adequately investigate his case.

It would take three more years before Maurice Caldwell walked out of jail on March 28, 2011, a free man after serving 20 years for a crime that he did not commit. 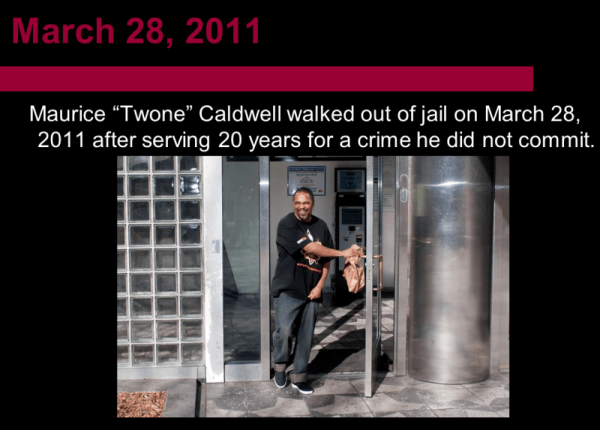 But, as we saw yesterday with Glenn Ford, the story never ends with release. Unlike Mr. Ford, Maurice Caldwell has some hope.

In a press release from the Northern California Innocence Project, which helped to free Mr. Caldwell in 2011, the passage of this law is welcome news for exonerated people like Mr. Caldwell.

“When exonerees get out of prison, we need places to live, clothes, therapy and a chance to go to school to learn the skills we missed out on. No amount of money can make up for what we went through but this bill provides meaningful compensation that will really help,” Maurice Caldwell said.

The current compensation rate for exonerees in California was set 15 years ago. Senate Bill 635 brings compensation rates up to meet current standards of living and to better help wrongly convicted individuals like Caldwell rebuild their lives upon release from prison.

“NCIP was honored to work on Senate Bill 635 with Senators Nielsen and Leno and delighted that the Governor signed it,” said NCIP Policy Director Lucy Salcido Carter. “The bill acknowledges the harm exonerees have experienced through wrongful conviction and loss of freedom and brings exoneree compensation levels up to account for inflation. We thank Senators Nielsen and Leno for their attention to this vital issue and for authoring this important bill.”

“There are many people who deserve to spend the rest of their lives behind bars because of their vicious crimes,” said Senator Jim Nielsen (R-Gerber).

“In cases where an innocent person has been wrongly accused and incarcerated, we as a society have the responsibility and moral obligation to acknowledge that our system is not perfect, and they deserve compensation to get their lives back in order,” Senator Jim Nielsen said.

Senator Mark Leno acknowledged, “The wrongfully incarcerated can never get back the time spent in prison that separated them from their loved ones and cut off other opportunities and life experiences,” but noted that Senate Bill 635 “provides increased compensation to help them rebuild some of what was lost.”

Mr. Caldwell applied for compensation to the California Victim Compensation and Government Claims Board in 2013. His claim is still pending.