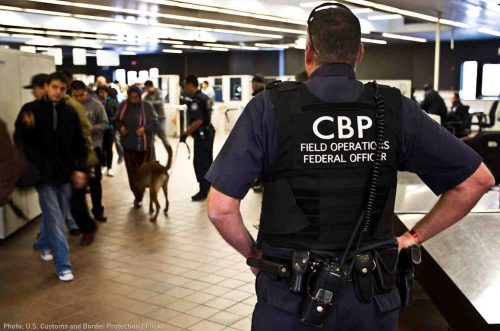 (From Press Release) – American Civil Liberties Union affiliates across the country filed coordinated Freedom of Information Act lawsuits today demanding government documents about the on-the-ground implementation of President Trump’s Muslim bans. The ACLU of Northern California, the ACLU of Hawai’i, and the ACLU of Utah jointly filed a FOIA lawsuit on Monday. Davis Wright Tremaine LLP is co-counsel in the lawsuit.

Today’s action is part of a total of 13 FOIA lawsuits filed by ACLU affiliates.

The ACLU first sought this information through FOIA requests submitted to CBP on February 2. Since the government has failed to substantively respond, the ACLU is now suing.

“The public turned out out en masse at airports, including San Francisco International Airport, to protest the Muslim ban and hold the government accountable,” said Linda Lye, Senior Staff Attorney with the ACLU of Northern California. “The public has a right to know how CBP implemented and enforced these Executive Orders at airports here and across the country.”

“CBP has a long history of ignoring its obligations under the federal Freedom of Information Act — a law that was enacted to ensure that Americans have timely access to information of pressing public concern. The public has a right to know how federal immigration officials have handled the implementation of the Muslim bans, especially after multiple federal courts have blocked various aspects of these executive orders,” said Mitra Ebadolahi, Border Litigation Project Staff Attorney with the ACLU of San Diego and Imperial Counties.

Each lawsuit seeks unique and local information regarding how CBP implemented the executive orders at specific airports and ports of entry in the midst of rapidly developing and sometimes conflicting government guidance.

The complaint can be found here:
https://www.aclunc.org/sites/default/files/04122017_NorCal_FOIA_Complaint.pdf

All of the affiliate FOIA lawsuits will be available here:
https://www.aclu.org/other/aclu-cbp-foia-lawsuits-regarding-muslim-ban-implementation

The ACLU national release on the original FOIA requests is here:
https://www.aclu.org/news/aclu-files-demands-documents-implementation-trumps-muslim-ban

You Have a Right to Know How Trump’s Muslim Ban Was Implemented. So We Sued

Extensive questions surround the chaos that erupted nationwide in response to President Trump’s first “Muslim ban.” Because the government has refused to hand over information that would allow the public to evaluate how the ban was implemented, ACLU affiliates have filed dozens of lawsuits around the country to demand details.

Chaos immediately erupted at airports, courtrooms, and political offices around the country. Dozens of refugees and travelers were detained with little to no explanation, denied access to lawyers, and in some cases put on return flights back to harm’s way.

As this crisis unfolded, U.S. Customs and Border Protection and the Department of Homeland Security issued contradictory statements, fueling mass confusion. The agencies claim that they, too, were left in the dark by the Trump administration. Reports confirmed that DHS Secretary John Kelly hadn’t even seen the final version of the Muslim ban until after the executive order was signed.

DHS’s attempts to clarify the terms of the ban nationally only perpetuated the confusion. On Saturday, January 28, DHS declared that green card holders were subject to the ban; by Sunday, January 29, government officials had “clarified” that the Executive Order did not apply to green card holders. Unsurprisingly, CBP’s local implementation of the Muslim ban in different international airports varied widely: While some agents aggressively tried to strip travelers of green cards, others hesitated, unsure which travelers were to be permitted entry and which were to be refused.

Perhaps most troubling, CBP officers apparently ignored the express terms of several federal court orders blocking certain parts of the Muslim ban. At Dulles airport, for example, Democratic members of the House of Representatives had to demand that refugee detainees subject to Trump’s ban be released. Similarly, when refugee advocates at JFK airport asked why the court orders that blocked the ban from taking place weren’t being enforced, some CBP officers replied: “Call Donald Trump.”

This confusion had serious human impacts. In Texas, a 33-year old Iraqi man in a wheelchair was detained for 15 hours after traveling to Dallas Fort Worth airport on a Special Immigrant Visa that was awarded to him because of his work with the U.S. Army. In Virginia, Yemeni individuals flying to Dulles when the first executive order took effect had their visas revoked upon landing and were required to fly back to Ethiopia. In New York, two doctors from Cleveland were subjected to extensive delays, detention, and distress at JFK airport after returning from vacation in Iran.

To clarify the public’s understanding of these urgent developments, 50 ACLU affiliates filed Freedom of Information Act requests on February 2. Yet more than two months later, neither DHS nor CBP has provided us with any information about their local implementation of the executive order.

FOIA’s purpose is to ensure that people have timely access to crucial government information. The public has a right to know how CBP officers have implemented the Muslim ban locally. We deserve to have access to that information now.

Dozens of ACLU affiliates across the country filed coordinated lawsuits yesterday demanding responses to our FOIA requests. Each lawsuit seeks unique, local information from CBP field offices, to clarify the public’s understanding of how CBP officers in each jurisdiction implemented the Muslim ban in the face of rapidly evolving and sometimes conflicting national guidance.

Democracy withers without government accountability, and accountability requires transparency. The government has a duty to keep the American people informed. This is particularly true for agencies like CBP, which have terrible transparency track records and feel empowered to upend the lives of immigrants and refugees with impunity. Stay tuned.

Share:
Tags:ACLUImmigrationMuslim BanTrump
Previous : LGBTQI Violations Part of Larger Context of Chechen Genocide
Next : How To Tell If a Prosecutor Is Only Pretending To Be a Criminal Justice Reformer