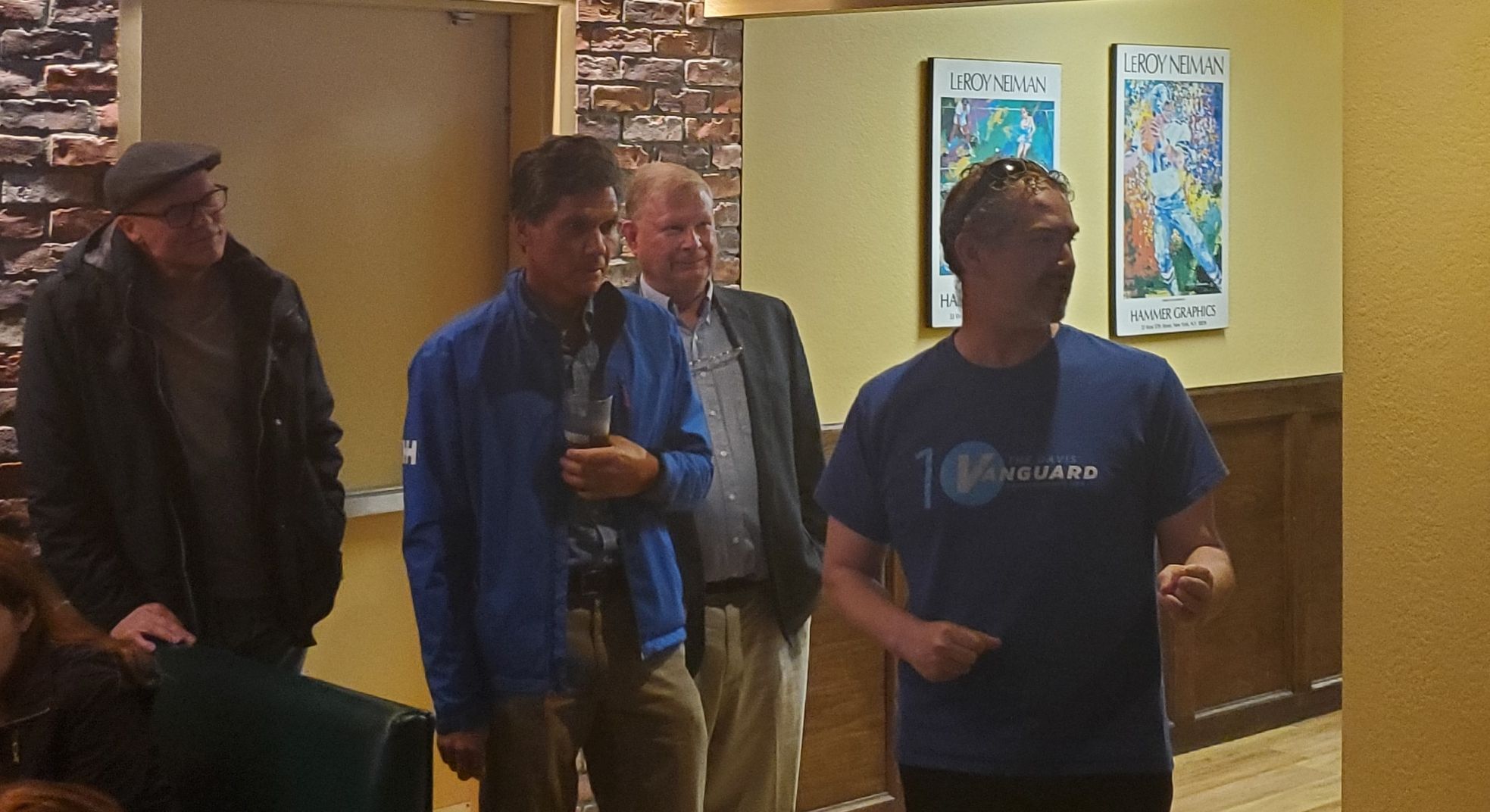 Sunday marked a successful fundraiser for the Vanguard.  As it turned out, several councilmembers spoke at the event, however, only Brett Lee talked about city issues, as he spoke about a new homeless initiative.  In the meantime, Dan Carson spoke on the state of journalism and Lucas Frerichs, arriving later after both Mayor Lee and Councilmember Carson left, also spoke about journalism and the need for the court watch program.

Mayor Pro Tem Gloria Partida was running Davis Pride Day in the rain and arrived at the end of the event, but did not speak.

Mayor Lee said that he appreciated the work of the Vanguard, “Because there’s more transparency.  There’s more information about what’s going on in our community.  The greater transparency, the better.”

He described the early morning rain and hail on Sunday morning and noted the people living in “flimsy tents” on the edges of Davis.  “While I was home and dry,” he said.  “they’re getting rained on.”

And while it stopped raining, “they’re living in mud, in (these) crummy $30 broken down tents.

“Anyone who has been out in the weather, you know that your miserable.  There’s not a place where they can go and warm up,” he said.  “There aren’t the facilities to allow someone to take a hot

shower or put on a clean pair of clothes.”

Mayor Lee said that he is supporting the idea of a respite center.

He said, “The idea behind the respite center is that it will be a place where people can go out of the weather…”  He said, “We can do this very inexpensively.”

He said that the council has given the city the go ahead to look into using city facilities for this type of program with a budget of up to $80,000.

“The idea behind the respite center is that it’s meant to be a pilot,” he said.  “We want to pilot this to show that it can be done, it can be done inexpensively, and also meet the needs of a reasonable portion of people who are currently homeless.”

Dan Carson talked about the state of journalism in Davis.  He noted that he had a background in journalism working at the Capitol for a number of years.  He went down to San Diego for the Union, covering state and local government for 15 years.

“Here we are and I feel I need to fight here today for an endangered species,” he said.  “Competitive community journalism.  Fewer and fewer towns like are have any newspaper at all.  Even more rare, the situations where there’s competitive news outlets that give you news and insight about your community.”

He said, “I have to be honest.  I worry… in this current environment whether any of them will even survive a few years from now.”

He noted that the Bee supplies very little local coverage of Davis anymore, their great coverage of Natalie Corona notwithstanding.

Councilmember Carson also said that when she retired, Debbie Davis invited them all to talk about the decline of the readership of the Enterprise and “how their readership has been hemorrhaging over the years.  She mentioned that their paper was down to four full time reporters.”

He noted, “The Vanguard, I really appreciate what you do.  But an organization that’s supported through charitable donations is always in a world where you’re living by the skin of your teeth.”

He said, “If you ever step in front of a bus, David, I don’t know what happens.”  He added, “You’ve made a huge personal sacrifice to crank out pieces day after day.  And provide a sometimes irritating but otherwise necessary alternative viewpoint for the issues of the day in the city.  We would be much worse off if you did not provide the wall to wall coverage you do of criminal justice issues and land use debates.

“You generously open your pages to anybody with opposing views,” he said.  “But I have to be concerned that that’s all somewhat imperiled down the line.”

“I’ve had ups and downs with local media including the Vanguard,” Councilmember Frerichs stated.  “I make my decision how I make them.  Sometimes the coverage is favorable.  Sometimes its not.”

“I think it’s so important to be supportive of local journalism especially in this day and age when journalism and media is totally under attack in this country and recently so,” he said.

Councilmember Frerichs illustrated the decline of the local news coverage.  He said that, even five years ago, the Davis Enterprise was still publishing five days a week, now it’s publishing three days a week.

“It’s continuing to shrink in size,” he said.  “That’s unfortunate.  It’s happening not only in Davis, it’s happening all over this country.”

He said that his wife, Stacie, is the executive director for the Davis Arts Center. They send out their catalogs quarterly.  When she started four years ago, they were sending out 10,000 catalogs.

“Just this spring, they’re now sending out 7000,” he said.  “This is real and it’s happening in our community – the loss of media and so the importance is so exceptionally important.”

He noted that so many philanthropic foundations are now stepping up to help fund community media.  Warren Buffett is buying is community newspapers “because he believes that that’s such an important part of what makes up a community.”

Councilmember Frerichs spoke about Vanguard Court Watch.  He noted that back in 2012 when he was first running for council, in April, he was called for jury duty.

“I served on a trial for a week,” he said.  “It was a third strike case.  The result was we found the gentleman not guilty.”

He said, “I was so appalled by the DA’s going after a harsher sentence than was warranted in this case – the entire jury felt the same way.  It was such an eye-opening experience.”

He said that was just one week, but there are people who deal with this day in and day out.

Dean Johansson, who was in the audience, noted that the Vanguard is the only publication that is watching the courts.

“I appreciate and sometimes agree, sometimes disagree with some of the stances in terms of the city issues,” Lucas Frerichs.  “But I am so appreciative of the work that the Vanguard does covering the courts.  That’s a whole aspect of American society that needs a magnifying glass placed upon it.”

57 thoughts on “Homeless Issues, the State of Journalism and the Court Watch Highlight the Vanguard Fundraiser”