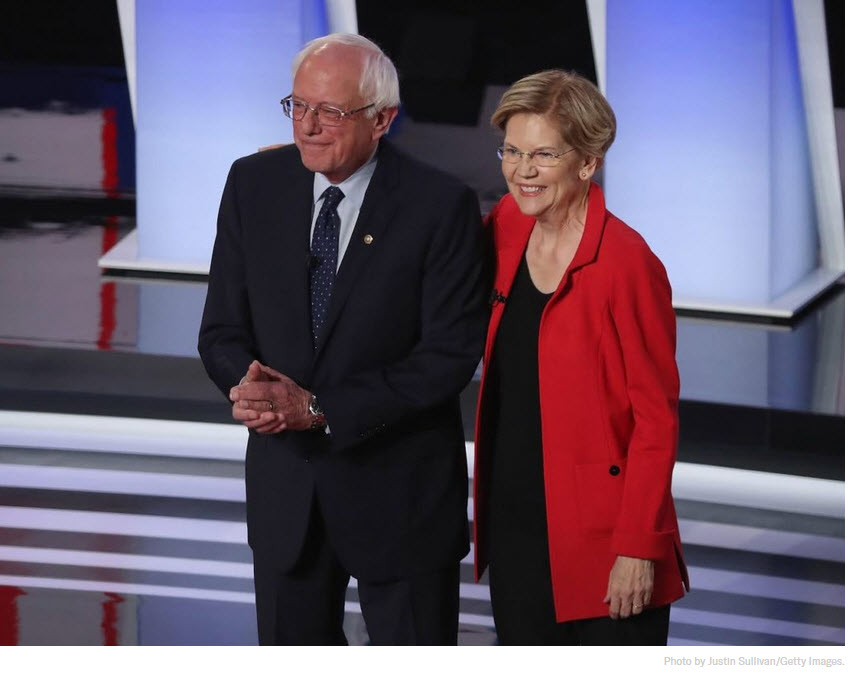 Within a few days of each other, Democratic presidential candidates Bernie Sanders and Elizabeth Warren released sweeping criminal justice platforms that rethink public safety and punishment after decades of harmful mass incarceration policy.

The Appeal talked to a number of experts and advocates who say the plans are the most decarceral criminal justice platforms to enter presidential politics. There’s concern these far-reaching progressive proposals could carry political costs for Sanders or Warren in the general election. Still, many feel that their plans represent a historic moment in more than 30 years of the reform movement.

In a plan released Tuesday, Warren pledged to repeal the Violent Crime Control and Law Enforcement Act of 1994, “tough on crime” legislation that catalyzed mass incarceration in America. Released just days before Warren’s, the Sanders plan strikes a similar tone in its pledge to cut the prison population in half by ending mandatory minimum sentencing and “three strikes laws” at the federal level, as well as expanding the use of presidential clemency.

Both plans also call for the legalization of marijuana, and an end to cash bail and the death penalty.

Sanders and Warren said they would incentivize reforms at the state and local levels, where the vast majority of defendants are processed through the system, by funding preventive community-based services that address the main drivers of crime, such as poverty, and that divert people away from the criminal legal system toward treatment for substance use and mental illness.

“We cannot achieve this by nibbling around the edges—we need to tackle the problem at its roots,” Warren stated in a Medium post outlining her plan. “That means implementing a set of bold, structural changes at all levels of government.”

Sanders was equally emphatic in an interview with the Associated Press about his plan. “We have a system that imprisons and destroys the lives of millions of people,” he said. “It’s racist in disproportionately affecting the African-American and Latino communities, and it’s a system that needs fundamental change.”

Former Vice President Joe Biden, a 2020 frontrunner, and contender Pete Buttigieg, the mayor of South Bend, Indiana, released plans in July calling for meaningful reductions in incarceration. But both have been scrutinized for their records on criminal justice: Biden, for being one of the architects of the 1994 crime law; and Buttigieg, for his response to a June police shooting that flared racial tensions in South Bend. Sanders and Warren seized on the opportunity to push the agenda in a much more progressive direction, experts told The Appeal.

And although many agree that mass incarceration must be tackled at the state and local levels, they are encouraged by elements of the Sanders and Warren plans. Both, for example, have proposed federal legislation to curtail “qualified immunity” for police officers accused of misconduct and brutality. The candidates have also said they would direct the Justice Department to pursue consent decrees over local police departments engaged in patterns of unconstitutional abuses, reversing a Trump administration slowdown in civil rights enforcement.

Additionally, Warren has pledged to end discriminatory stop-and-frisk policing by directing the Justice Department to “withhold federal funding from law enforcement agencies that continue to employ it and other similar practices.”

“Criminal justice has emerged as a pivotal part, maybe even the centerpiece, of a major political party’s primary,” Daniel Medwed, professor of law and criminal justice at Northeastern University in Boston, told The Appeal. “So, while federal criminal activity is a drop in the bucket relative to state-level activity, I think there will be a downstream effect because local candidates on the ballot might echo the folks at the top of the ticket.”

The 1994 crime bill rewarded dozens of states that passed so-called “truth-in-sentencing” laws, requiring the vast majority of violent offenders to serve 85 percent of their sentences for offenses such as murder, nonneligent manslaughter and aggravated assult. Eliminating such requirements would be significant to decarceration efforts, because doing so would give federal prisoners meaningful opportunities for release, and might incentivize states to follow suit. But the Warren and Sanders plans stop short of addressing violent offenders in any detail, although they both want to end the death penalty and rein in heavy-handed prosecutors.

Jonathan Simon, a professor of criminal law at the University of California, Berkeley, said the  Warren and Sanders reform plans still manage to go further than any Democratic presidential candidate has gone in the past.

“The most impressive thing to me is [Sanders’s and Warren’s] willingness to step into ground that organized police forces and district attorneys typically draw red lines around,” Simon said in a phone interview. “Nobody really wants to find out if voters are really prepared to rethink long sentences for violent crimes, but that will be necessary if we want to end mass incarceration.”

How these proposals resonate with voters is yet to be seen. Should Warren or Sanders emerge as the Democratic nominee, they will square off with President Trump’s record on criminal justice reform. In addition to engaging reform-minded celebrities on clemency, Trump signed the First Step Act, bipartisan legislation that released thousands of federal prisoners who were serving time for nonviolent drug offenses and other low-level offenses.

“Now for the first time in our lifetimes, you have both sides of the aisle competing to be the best in criminal justice reform, which is unheard of,” Howard Henderson, director of the Center for Justice Research at Texas Southern University, told The Appeal.

Alex Vitale, a sociology professor at New York’s Brooklyn College and the author of “The End of Policing,” said Warren and Sanders, along with the other Democratic presidential candidates, can energize their bases by showing they are leading the justice reform debate.

“An exciting and transformative criminal justice program is crucial to some of the constituencies that sat out the last election,” said Vitale, who consulted with the Sanders campaign on its plan. “Some of those constituencies are the most impacted: young people, poor people, and people of color.”

Originally Published in the Appeal.