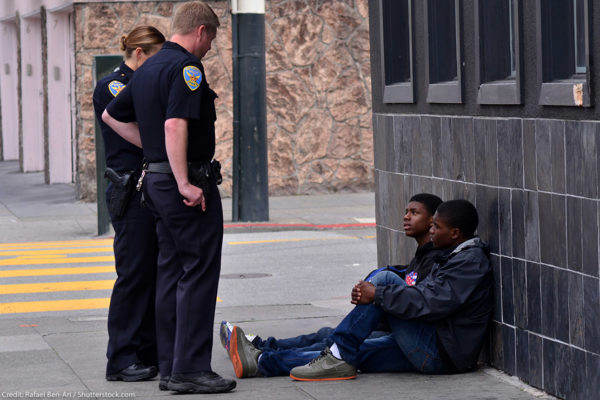 By Ezekilel Edwards and Shilpi Agarwal

The way which America enforces its drug laws has been racist since its inception. Across racial and ethnic groups, Americans use and sell drugs at comparable rates, but law enforcement has selectively targeted Black and brown people for stops, arrests, prosecution, and imprisonment at wildly disproportionate rates.

This race-based enforcement is not only limited to a handful of police departments, regions of the country, or political ideologies. Rather, it has defined American policing across the board, from severely segregated cities in the Midwest to the beacons of progressive politics in the Northeast and West Coast.

So it should come as no surprise that in 2013, when the San Francisco Police Department (SFPD) teamed up with the U.S. Drug Enforcement Agency (DEA) to go after people selling small amounts of drugs in the city’s Tenderloin District, the SFPD focused on Black people. Even though people of all races engage in the Tenderloin’s drug trade, and 40 percent of those are white and Latinx, all 37 individuals federally prosecuted in the two SFPD/DEA operations were Black. One SFPD officer involved in the operation was captured on video ignoring an Asian-American person engaged in drug activity in favor of arresting a Black person instead. Another officer was heard saying “fucking BMs” (i.e., Black males) as the camera was focused on a group of Black men and women.

Why would the SFPD target Black people specifically for federal prosecution? Because federal drug laws carry harsher punishment — including mandatory minimum sentences — than charges brought in state court. Further, studies have repeatedly shown that Black people are charged and sentenced more harshly than

After the prosecutions were consolidated into a single case (over the government’s objection), a federal district court judge found that there was “substantial evidence suggestive of racially selective enforcement by the [police department].” He ordered the police department to produce further discovery in response to several defendants’ motion seeking evidence proving that the SFPD had impermissibly targeted them because of their race. The U.S. Attorney eventually dismissed the cases rather than expose evidence of police wrongdoing. The government’s actions in the case were a part of a long standing tradition that uses the so-called War on Drugs to selectively target marginalized groups, including Blacks, Mexicans, and Chinese.

That is when the American Civil Liberties Union, the ACLU of Northern California, and the law firm Durie Tangri LLP sued the SFPD on behalf of the Black people whose constitutional rights had been violated.

In a groundbreaking victory, the plaintiffs have reached a settlement with the City of San Francisco under which each client will be compensated for the harm they suffered at the hands of the SFPD. Moving forward, San Francisco’s Department of Police Accountability will now include a “racial bias” category on its complaint form and in its intake process for anyone who feels that they have been mistreated by the police because of their race.

This victory is significant because what happened to our clients has been business as usual for the SFPD and police departments across the country for quite some time. The SFPD’s long history of racially discriminatory law enforcement has been documented through reports published by a range of organizations and agencies, including the Hayward Burns Justice Institute, the U.S. Department of Justice, and a Blue-Ribbon panel convened by the San Francisco District Attorney’s Office which all identified a plethora of racially biased practices in SFPD’s stops, searches, arrests, use of deadly force, and data collection.

The Blue Ribbon panel documented how several SFPD officers exchanged racist text messages, which referred to Black people using the N-word and “savages,” and referencing cross burnings. Thus, the SFPD has carried on the American tradition of dehumanizing Black people for an activity often ignored when engaged in by white people.

For 40 years, prohibition has been a major driver of America’s gargantuan jail and prison population, done little to curb drug abuse and distribution, wasted billions of dollars, militarized the police, and caused grievous harm to communities and families it was pretending to help.

Ultimately, the only solution to the issue in San Francisco, as in most American cities, is to shrink the size, reach, and responsibilities of the police department, and decriminalize the use and possession of drugs. Until then, hopefully, this settlement, which builds upon a long-documented history of racism in the SFPD, will create a process through which the police can be held more accountable and contribute to ending the SFPD’s harmful and humiliating enforcement practices targeting the Black community.

Ezekiel Edwards is Director of the ACLU; Shilpi Agarwal , Interim Legal and Policy Director and Senior Staff Attorney for the ACLU.