Assemblymember Ash Kalra officially introduced the California Racial Justice Act, a landmark bill that addresses racial discrimination in criminal sentencing and convictions.  The action was part of the California Anti-Death Penalty Coalition’s Lobby Day.   The announcement occurred one year after the announcement by Governor Newsom put a moratorium on the death penalty.

The assemblymember agreed with the governor “that the criminal justice system is ‘a racist system, you cannot deny that, it is a system that is perpetuating inequality.’  That statement stands true today as it did when I was a public defender.”

He said he was honored that “we are taking a profound step forward in the fight to eliminate racial discrimination in our criminal justice system.” 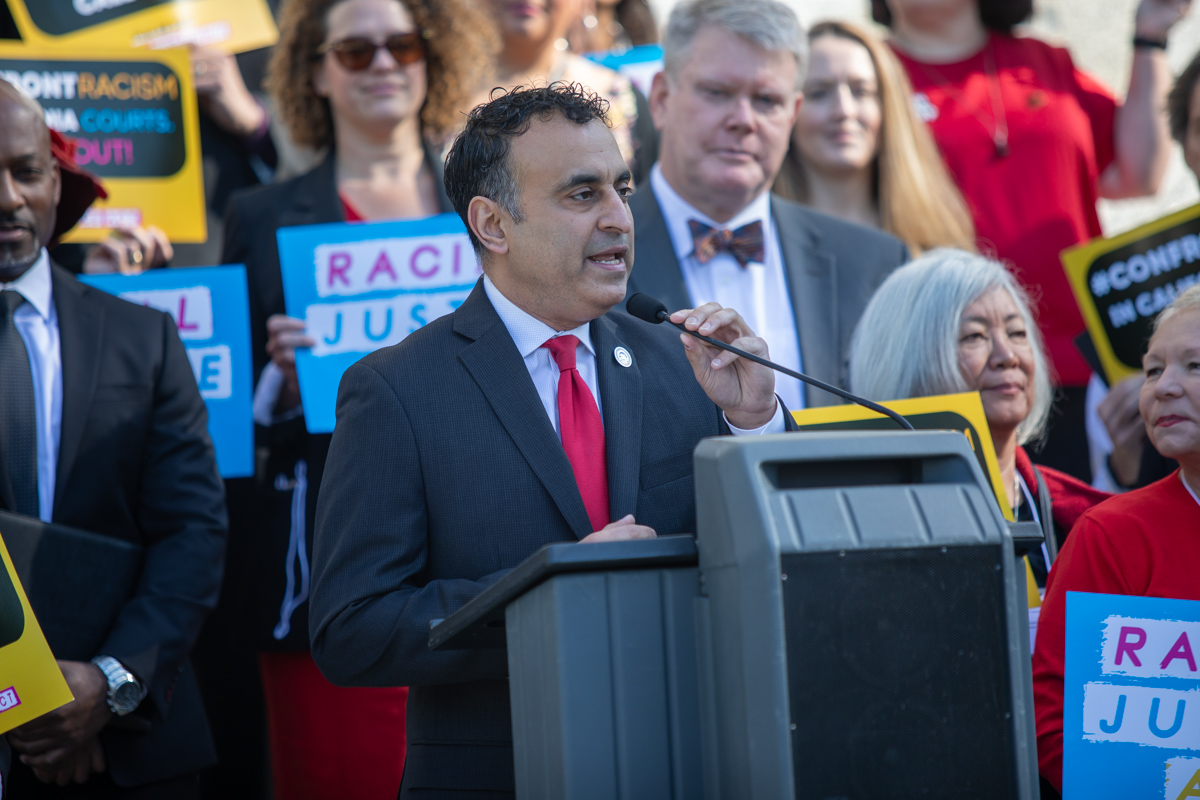 “California’s Civil Rights law clearly prohibits discrimination in housing, in employment, and public accommodation,” he said.  “But nowhere in California law is there a clear statement that racial

discrimination will not be tolerated in our criminal justice system.

“The opposite is happening right now,” the assemblymember stated.  In his 11 years as a public defender, “I have seen racial discrimination first hand in the court system.  I have seen too many brown and black faces, young men, that question not just the system but ultimately themselves, what their role in society is, and whether they’ve been left behind.”

“We, who believe in justice, must confront racism in the courts,” he said. 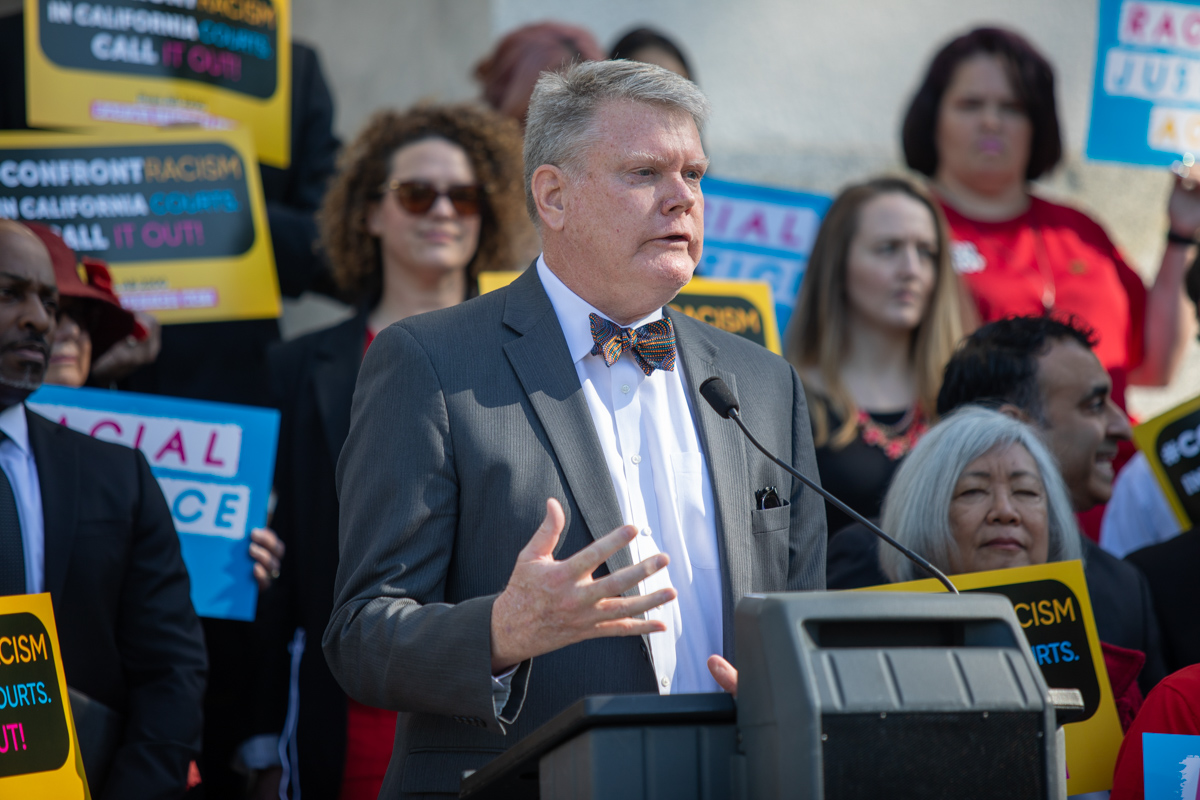 “If we stop talking about race in California, it’s the racists ultimately who win,” he said.  “It’s not always easy to identify where that bias is built into our system.”

Assemblymember Stone also pushed his bill, AB 2512, which would prohibit the execution of people with intellectual disabilities.

While the Supreme Court has ruled such executions are unconstitutional, the definition of such can difficult.  “We know there are people on death row with intellectual disabilities,” the assemblymember said on Wednesday.

In addition, “that has been a tool that has been used to profile against various races,” he said.  “That has given prosecutors free rein to put people on death row who do not deserve to be there.

“Racism is difficult to ferret out,” he said, arguing it will take a number of bills to get it out of the criminal justice system.

“Death row still exists,” he said.  “Once this governor’s gone, if we do not complete this work then California, I’m afraid, might go back to executing people on death row.  We’re all very clear on the injustices that means.” 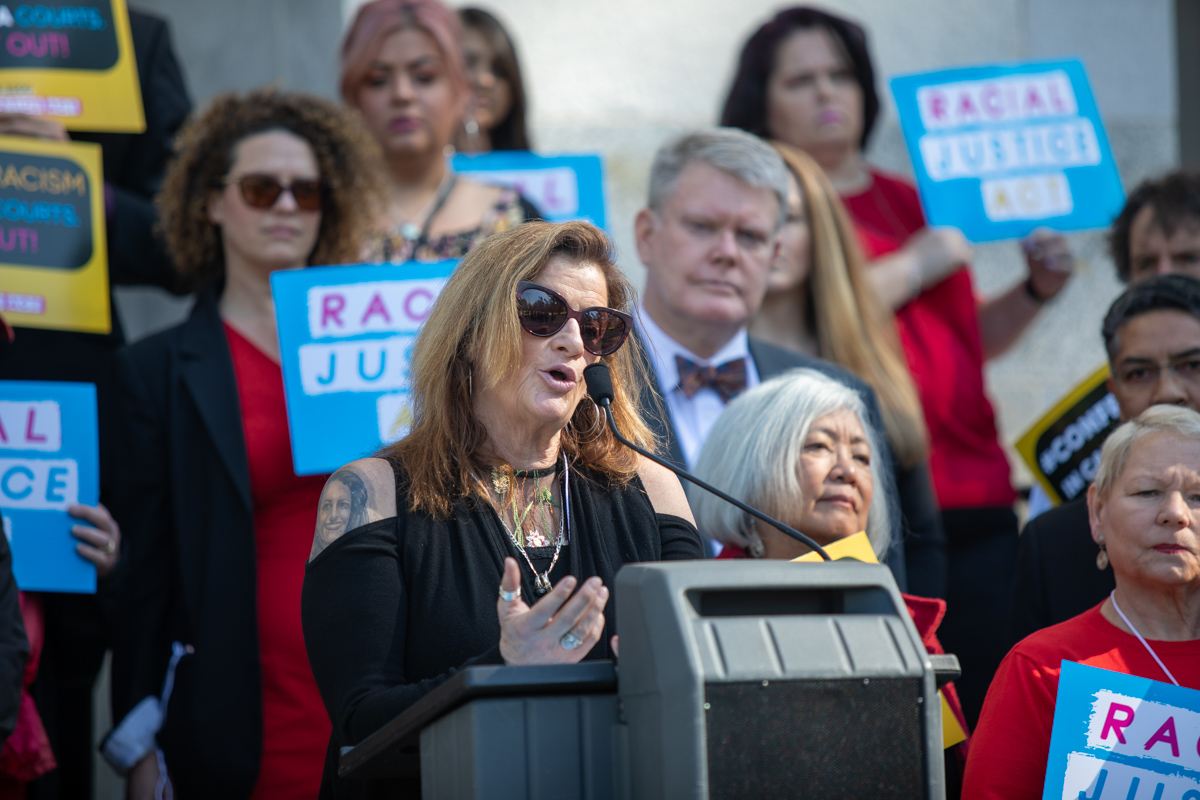 Beth Webb is the sister of a person killed in the Seal Beach Mass shooting—the Scott Dekraii case in which Scott Sanders uncovered massive amounts of scandal in the Orange County Sheriff’s Department and OC District Attorney’s Office.

Ms. Webb’s mother was the only survivor of that shooting.  This was supposed to be an open and shut case, and yet, she said she spent the next six years in court “watching the Orange County Sheriff and the Orange County District Attorney cheat—that’s not an opinion, it was upheld in a California Court.”

The trial judge in the case, threw the Orange County DA off the case, as “they could not be trusted to try the case.”

She said that she was theoretically against the death penalty, but she didn’t know how she would feel if it happened to someone she loved.

“I found out—it solidified my opposition,” she said.  The criminal justice system, she found out, was worse than she feared.  “You’re not going to heal my family or give us closure or justice by taking someone else’s life.” 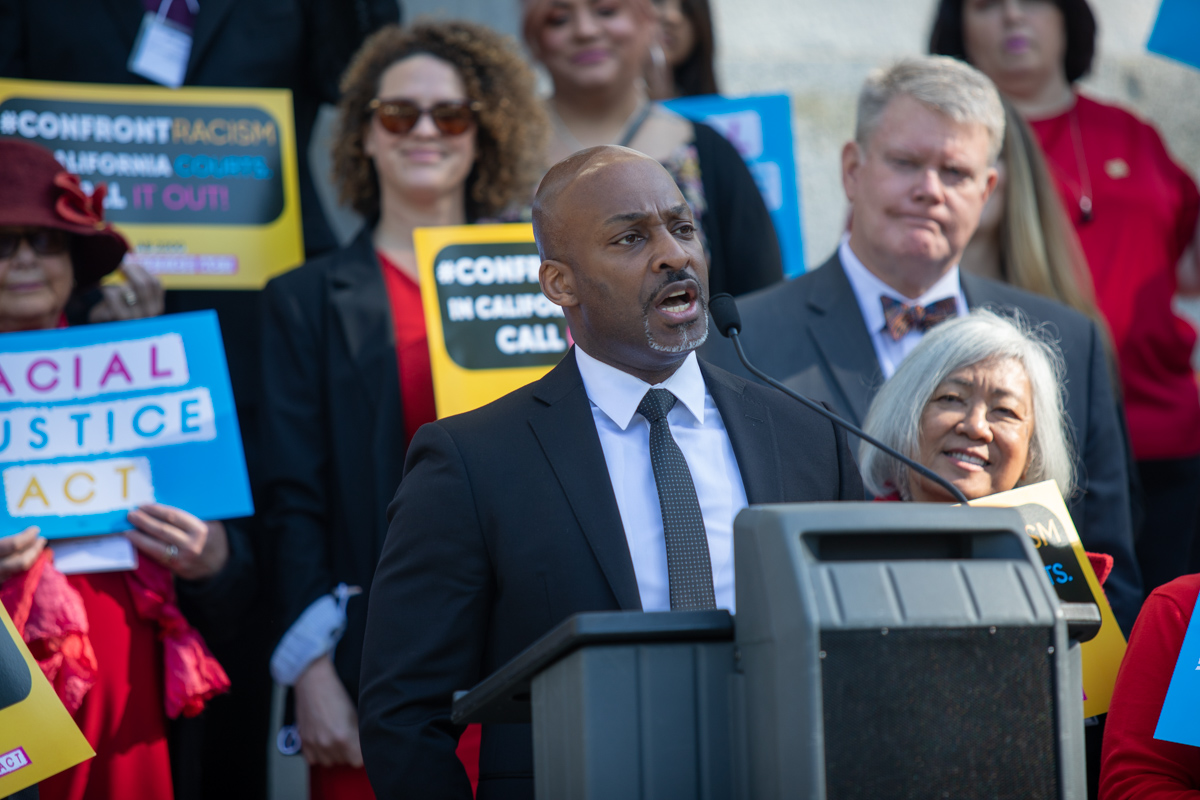 Brendon Woods, the chief public defender of Alameda County and the first person of color, the first black person, to be in that position, spoke.

“I’m also the only black person as a chief public defender in the state of California,” he said.  “If you hear that—you should be ashamed.

“I work in Oakland, Berkeley, the home of the Black Panthers, and it wasn’t until 2012 that a black person held this position,” he said.  “You want to talk about racial injustice—that’s it, right there.”

Mr. Woods spoke about his uncle who raised him.  He got 27 years and was convicted—“there wasn’t a single black person on his jury.”

One of his attorneys, an African American, said that over 50 percent of her clients have been black.  “She can count the number of jurors who decided their cases who were black—on one hand,” he said.  “The LA DA has sent 22 people to death row in her seven years as District Attorney—all 22 have been people of color.”

In Alameda County ten percent of the population is black.  It is home to Santa Rita Jail—the third largest in California.

“It is a monster,” he said.  “Santa Rita Jail is 15 percent white, 48 percent black, 30 percent Latinx.  This happens right here in California.”

He noted the 1987 Supreme Court case of McCleskey v. Kemp where Mr. McCleskey, a black man, was convicted of murdering a white police officer in Georgia and sentenced to death.

The case went to appeal and the appellate counsel looked at 2000 cases where they were able to show conclusively that a black person who kills a white person is far more likely to get the death penalty than the reverse.

“They showed that.  It was clear.  Not a question of a doubt,” he said.  “The Supreme Court in that case said apparent disparities at sentencing are an inevitable part of our criminal justice system.  Think about that.”

He said that the Supreme Court admitted that “sentencing was racist” and “there’s not a damn thing we’re going to do about it.”

“Well I disagree,” he said.  “The Racial Justice Act is a step in the right direction to fix that.” 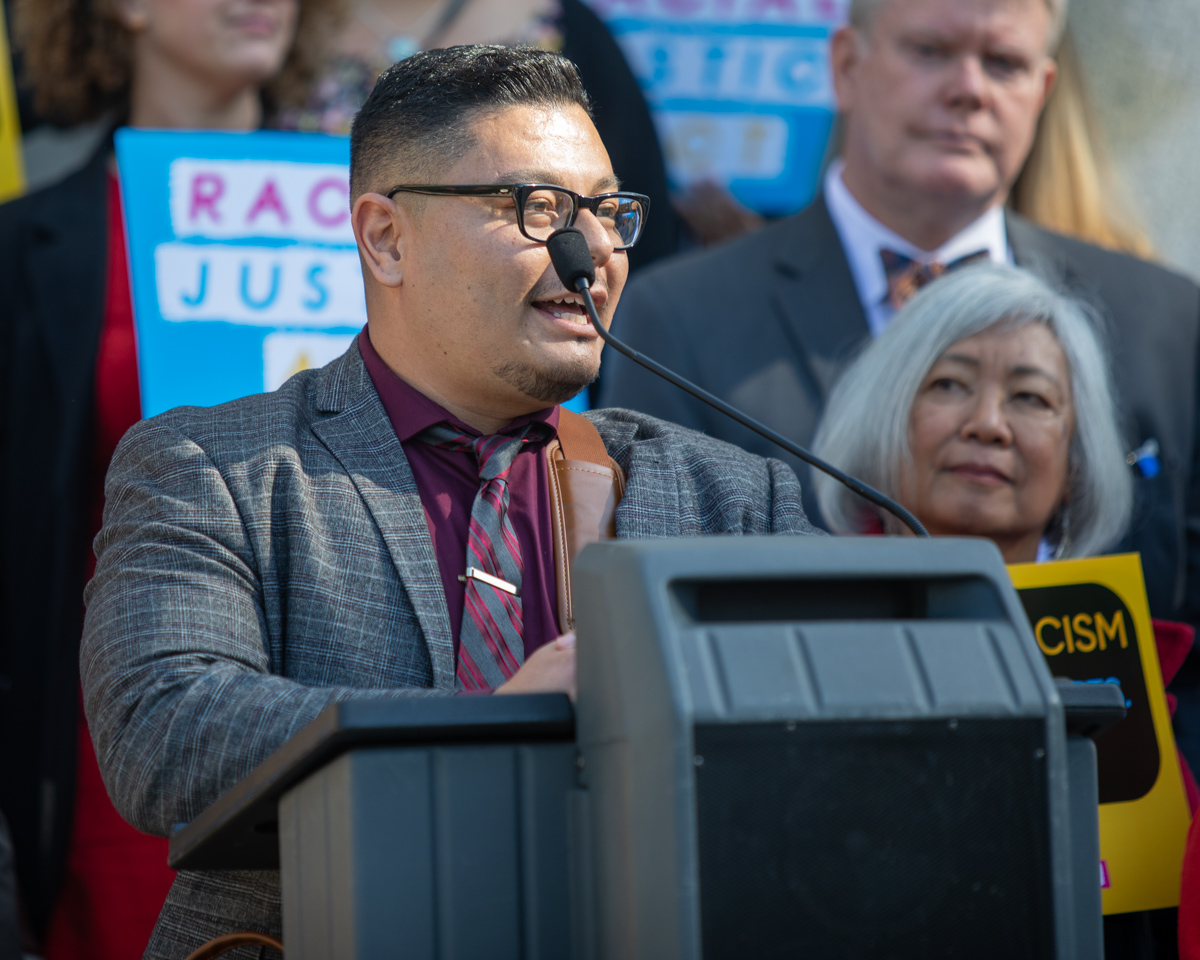 He spent a week after the news he would face the death penalty “imaging my death.”  He imagined them dragging him down the hallway to his death, screaming “and pleading for them not to kill me.

“That’s just the impacts of the death penalty,” he said.