Bi-weekly update from Santa Rita Jail’s COVID-19 crisis. The Covid In-Custody Project partners with the Davis Vanguard to bring quantitative and qualitative reporting on the pandemic’s impact on county jails and CDCR to the public eye.

ALAMEDA, CA— Over the past two weeks, COVID-19 cases in Santa Rita Jail (SRJ) have remained low. However, roughly only 26 percent of the incarcerated population is fully vaccinated, and 1 percent is partially vaccinated.

With limited information on vaccinations for jail staff, the threat of COVID-19 persists inside the jail.

The Alameda County Sheriff’s Office (ACSO) reported three new cases in the jail population and no staff/contractor cases in the last two weeks. Currently, there are three incarcerated persons with active infections.

ACSO first began administering vaccinations to those with underlying medical conditions and comorbidities on March 1. Since then, vaccines have been offered to other parts of the jail population.

As of July 2, 845 individuals were given the single dose J&J vaccine or both doses of the Moderna vaccine while in custody. Only 551 of them remain in custody, i.e. roughly 26 percent of the current population is fully vaccinated.

91 individuals have received one dose of the Moderna vaccine, of which only 24 remain in custody, i.e. roughly 1 percent of the current population is partially vaccinated.

The population in these HUs changes constantly due to transfers, releases and intake. Because of this, there may be new residents in these units who have not been offered the vaccine yet.

This is the breakdown of second dose Moderna administered by ethnicity, age and sex as of June 18. 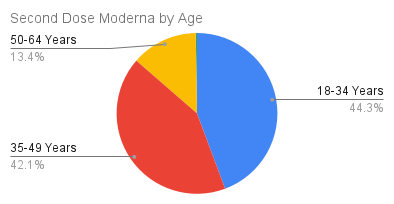 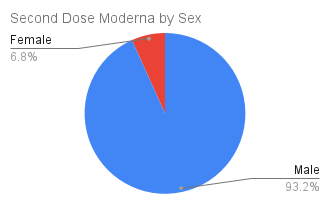 In a letter dated from March 10, ACSO requested the Board of Supervisors (BOS) to accept grant funding in the amount of $1,121,503.18 from the 2020 Coronavirus Emergency Supplemental Funding Program for the period of March 2021 to Jan. 2022.

ACSO stated that the funding would be used “to open four vacant housing units at the Santa Rita Jail, which will enhance our ability to quarantine inmates, spread the inmate population and slow the spread of COVID-19.”  Additionally, it would “facilitate the delivery of medical services and vaccinations for inmates at Santa Rita Jail. There are no existing funds to accomplish these tasks,” wrote Sheriff Ahern.

SRJ Commander Yesenia Sanchez explained that the grant was partially used for additional staffing towards the jail’s the COVID-19 response, such as medical staff who administer COVID-19 tests and perform screenings on new books during the intake process.

Mike Durbin, Health Services Administrator for Wellpath, stated that five additional medical staff have been hired through this funding.

Captain Luckett-Fahimi added that, along with staffing a few housing units that were previously closed due to the pandemic the funds are now being used for social distancing and to open two intake pods.

ACSO is expected to follow up with a detailed breakdown of the costs and services in the upcoming weeks.

114 staff/contractor cases have been recorded since the pandemic emerged, all of which have recovered. There are no active cases.

On March 1, the Alameda County Health Officer issued a mandatory testing order for all ACSO employees who work at SRJ after multiple failures from ACSO to comply with Public Health’s recommendation to test 100 percent of staff per month or 25 percent of staff per week.

For the ACSO SRJ mandatory staff testing period from June 27 to July 10, 461 individuals have been tested so far. The cycle is still ongoing.

In the last testing cycle from June 13 to June 26, ACSO reported that 910 individuals were tested. The number of staff required to comply is still pending. In previous testing cycles, after accounting for valid exemptions— extended time-off, religious reasons, qualifying disability or medical restrictions, or temporary reassignment outside of SRJ, anywhere from 969 to 1016 ACSO SRJ staff members had worked at the jail and therefore were required to get tested biweekly.

Since the start of the program, a total of 43 ACSO SRJ staff have failed to test in consecutive testing cycles— all of them have received warning letters.

For the April 25 – May 8 & May 9 – May 29 cycles, four ACSO SRJ staff members received warning letters. One of them was subjected to administrative discipline for not getting tested in any of the testing cycles since the health order was implemented. Commander Sanchez stated that while administrative action has been taken, the specifics cannot be discussed as the officer is protected under the Peace Officer Bill of Rights.

Using the California Immunization Registry (CAIR), the Alameda County Public Health Dept. matched 875 ACSO employees out of 1678 total employees with records of individuals who received at least 1 dose. 617 of them or 35 percent of the total ACSO employee force are fully vaccinated.

Commander Sanchez noted that the CAIR database has several limitations, such as “missing data and the lack of consistent identification.” Since the vaccination count from this database is not specific to ACSO SRJ staff, and instead encompasses all ACSO employees, it does not indicate the level of immunity among those who come in contact with incarcerated people.

When the Covid In-Custody Project pressed ACSO representatives on conducting a survey to ascertain the vaccination status of ACSO SRJ staff, Captain Luckett-Fahimi stated that ACSO refuses to do so since “some staff have valid exemptions from getting vaccinated, religious exceptions, or have not gotten the vaccine yet for personal reasons.”

Santa Rita Jail’s medical provider, Wellpath, has requested their full-time and part-time medical staff to self-report their vaccination status through a survey.

When asked if a similar health order could be issued for ACSO, Kimi Watkins-Tartt, director of the Alameda County Public Health Dept., stated that they do not plan on doing so.

She stated that currently, businesses are required to follow CAL/OSHA guidance. Anyone who is unvaccinated is still, without a health officer order specific to SRJ, treated as unvaccinated. As an employer, masking is still required inside of the business settings, and this applies to ACSO as well.

Captain Luckett-Fahimi added that ACSO has not relinquished any of their COVID-19 protocols, and all staff are still required to wear masks. Temperature checks and cleanliness protocols are also still in place.

From June 22 to July 5, approximately 503 tests have been administered, of which 38 are pending results. Approximately 28 percent of the jail was tested in the last two weeks and 16 percent in the past week. Higher testing rates may be attributed to ongoing surveillance testing.

In the past month, roughly 63 percent of the jail population was tested.

Since June 18, the refusal rate for new books, or intake, has decreased to 30 percent.

The refusal rate for expanded testing, or testing conducted for patients with medical vulnerabilities, residents in open air units, and kitchen or laundry workers, has dramatically decreased to 32 percent.

For individuals preparing for release or transfer, the refusal rate increased to 25 percent.

There was a zero percent refusal rate in quarantined housing units subjected to surveillance testing.

The jail population has remained fairly constant over the last 2 weeks. Currently, there are 2108 people in custody.

Between June 22 and July 5, a total of seven housing pods were quarantined. Currently, there is one housing pod still under quarantine and undergoing surveillance testing.

All of them were quarantined for the second time in the last two months, or re-quarantined since the pandemic started.

HU 6 B was quarantined on July 1 due to a patient that tested positive for COVID-19. The unit is undergoing surveillance testing. It was last released from quarantine on May 28.

Data on vaccinations for jail population as of June 18: