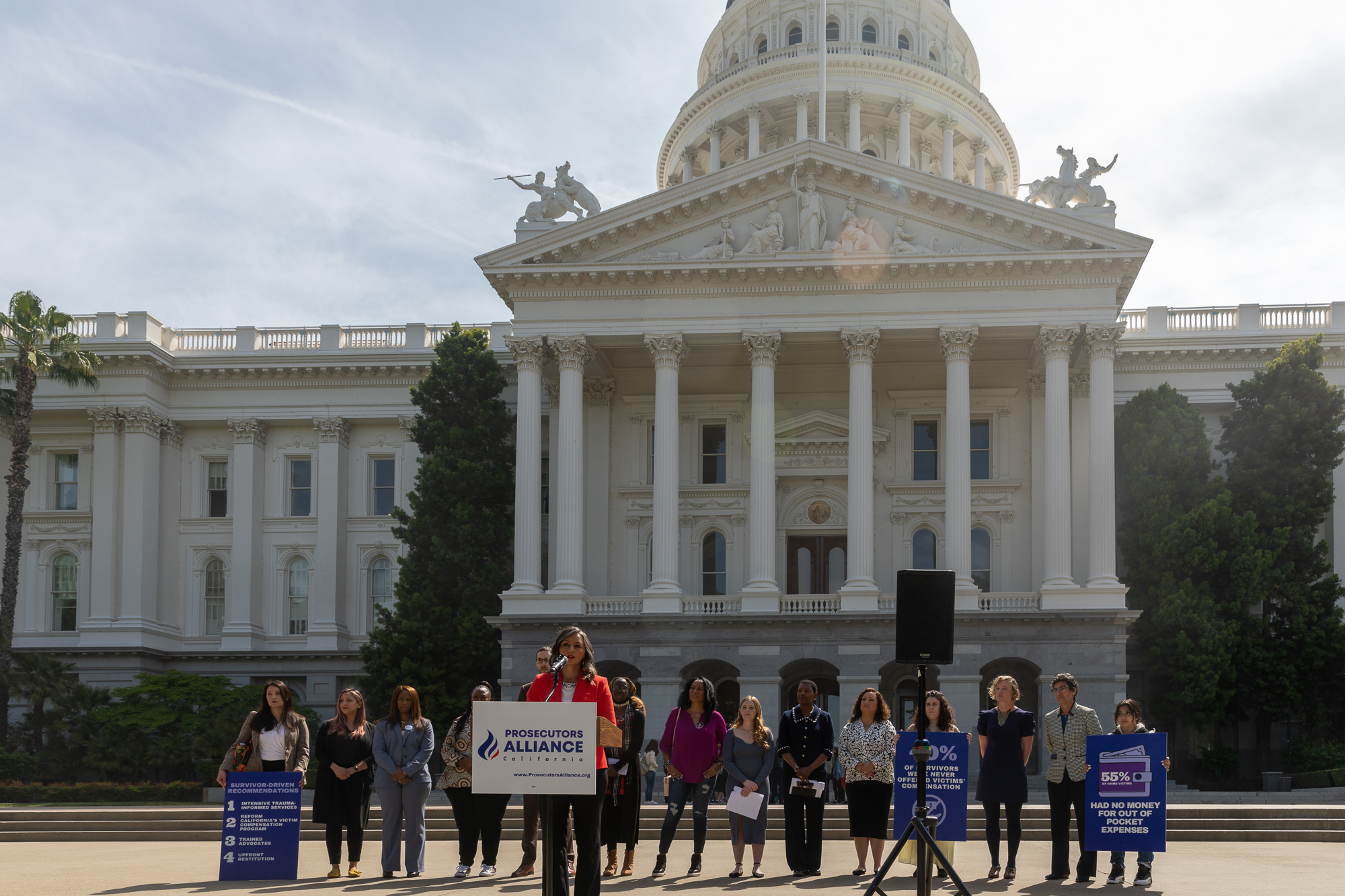 Sacramento, CA – Unbeknownst to the Prosecutors Alliance that sponsored Monday’s press conference where a number of crime survivors told their stories, their event would coincide with a caravan demonstration by the People’s Convoy, protesting vaccine mandates and other causes.

The dynamic put a number of people into close proximity with the pre-planned press conference and generated heckling and shouting that at times was triggering to a number of the crime survivors already traumatized by their experience. 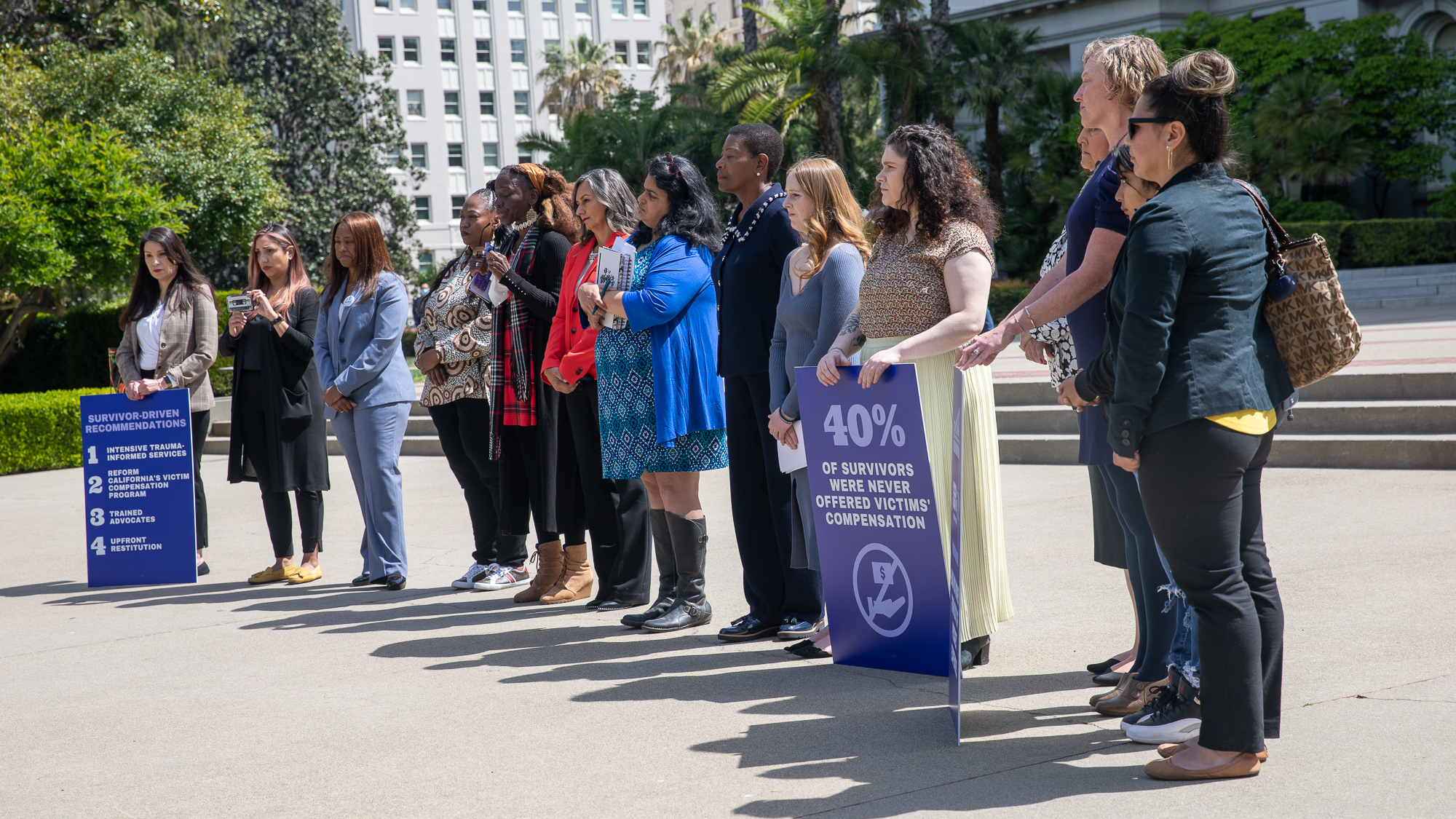 The press conference brought together DAs, state legislators and survivors of crime to announce the findings of a survey of 711 victims of crime and to discuss important initiatives necessary to enhance California’s approach to helping victims heal.

victims of crime. The survey of victims had alarming results, with most participants being victims of multiple violent crimes and nearly 40% not being offered victims’ compensation.

Sadly, 55% of respondents said they did not have money to pay for out-of-pocket expenses like mental health or relocation, so they opted not to access services or to move as a result. Twenty-five respondents actually turned to fundraising to pay for expenses.

Survivors reported needing more support, not just immediately after the crime, but for a significant time after the crime and outside of business hours. For example, the tragic events in Sacramento two weeks ago happened at 2 am. “For too long our system has focused almost exclusively on punishment and that left victims on their own to heal,” said Prosecutors Alliance Founder and Executive  Director Cristine DeBerry. “Our traditional approach to crime is tough on victims.  It siphons scarce resources we need to help people heal into a system of retribution. To  enhance safety and meet our obligations to victims of crime, success must be measured  by how well we help people heal from harm.” 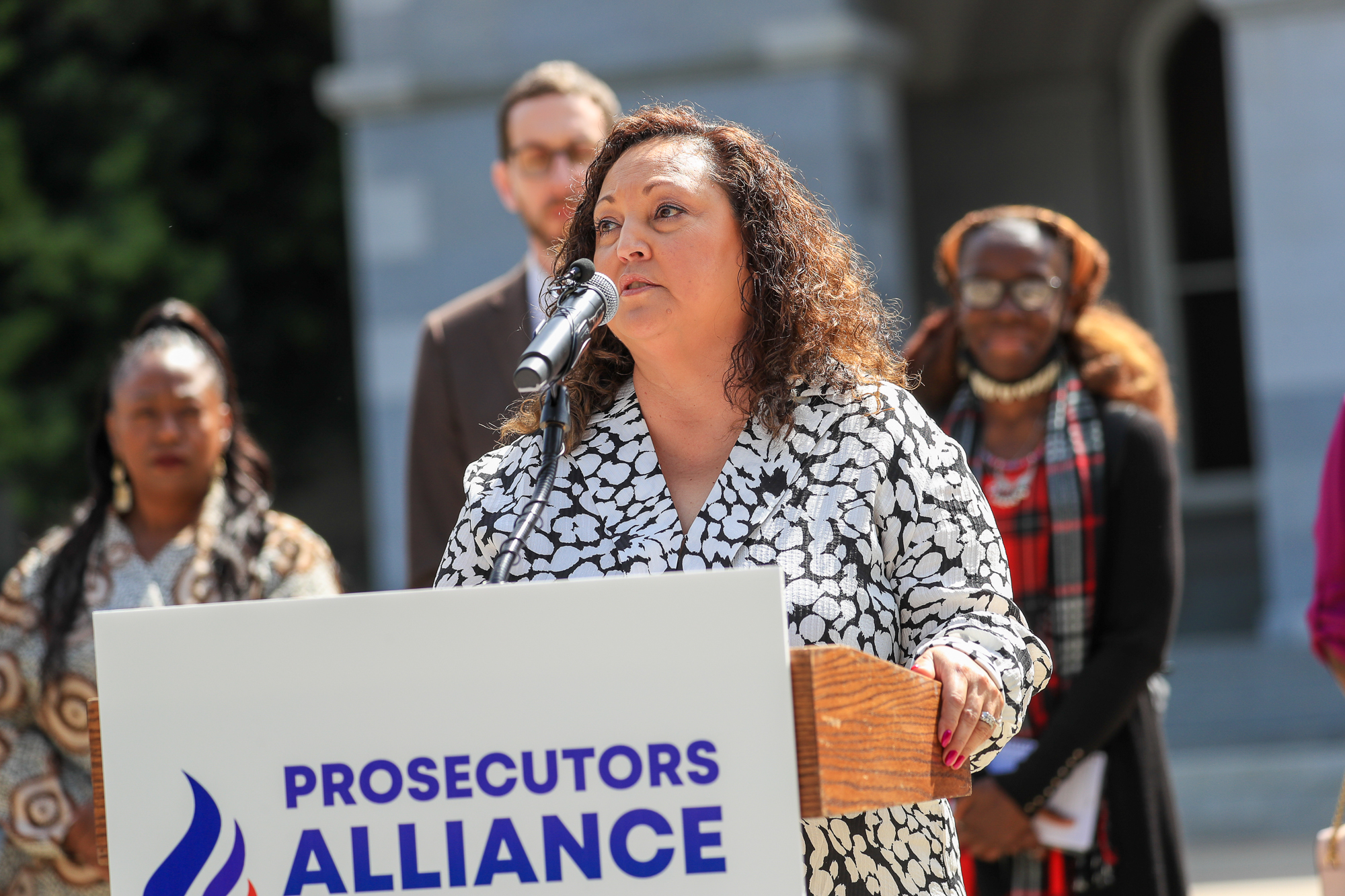 Dr. Gina Castro Rodriguez explained “this is our first big effort to gather the voices of those who have been most affected by violence and crime. It was really important for us in this study to hear directly from survivors about their experience, the things that worked, the things that didn’t and the things that we need to do better for our victims of crime.” 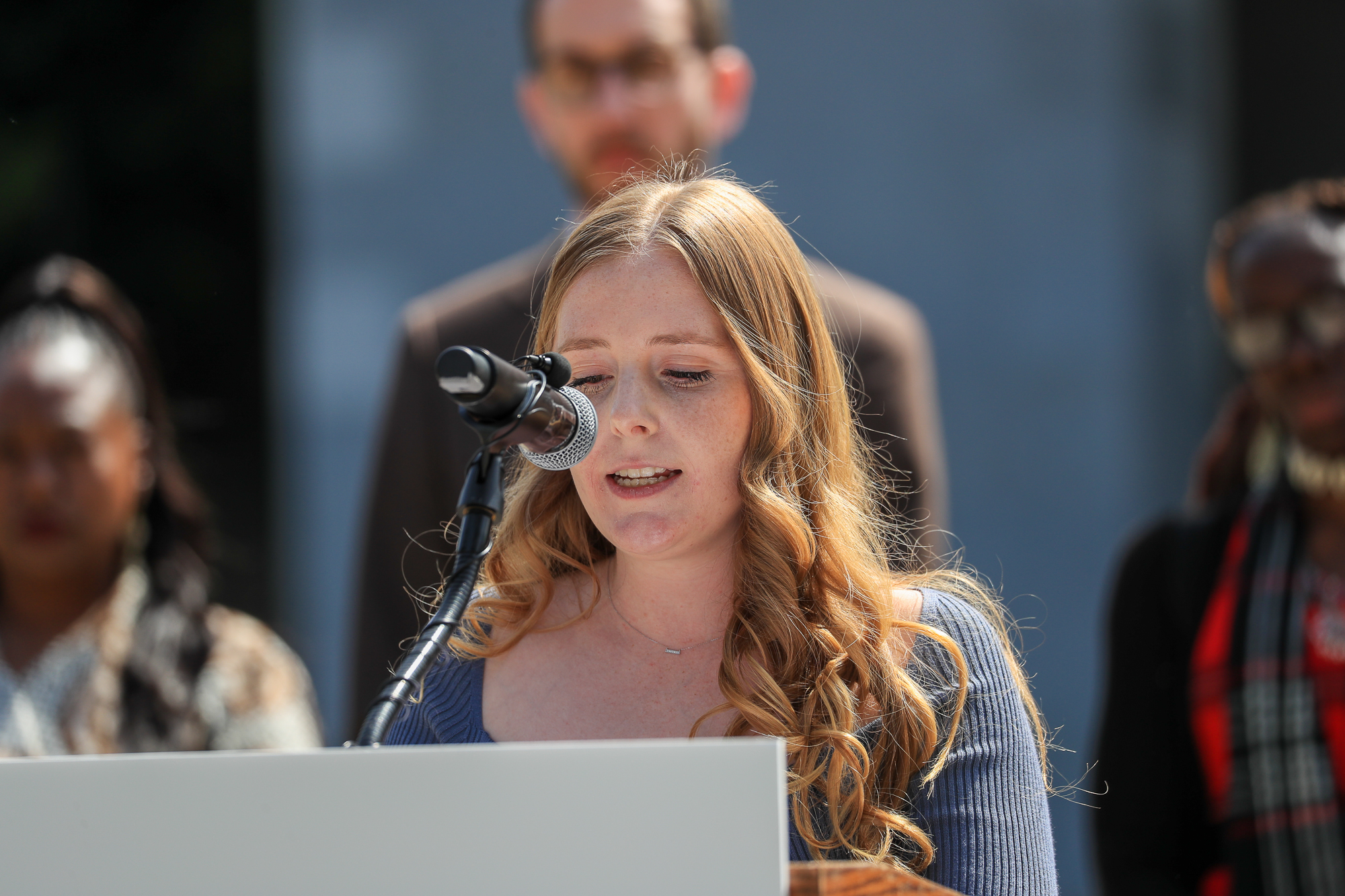 Megan Bull was one of those interviewed by the Prosecutor’s Alliance.  She grew up in Vacaville, attended UC Davis, and was one of the survivors of the mass shooting at the Gilroy Garlic Festival.

“I crumbled under the guilt of surviving and the all consuming PTSD,” she said.  “I expected calls from professional or officials with resources or services, but I was never contacted. My family had to be the ones to help find me a therapist because searching for one myself became too overwhelming.”

She explained that she did finally find an in-network therapist, but her needs have constantly changed, and she has had to “work up the courage to walk across the street or attend workout classes with strangers. In the first few months, I had to learn how to navigate flashbacks triggered by fireworks.” 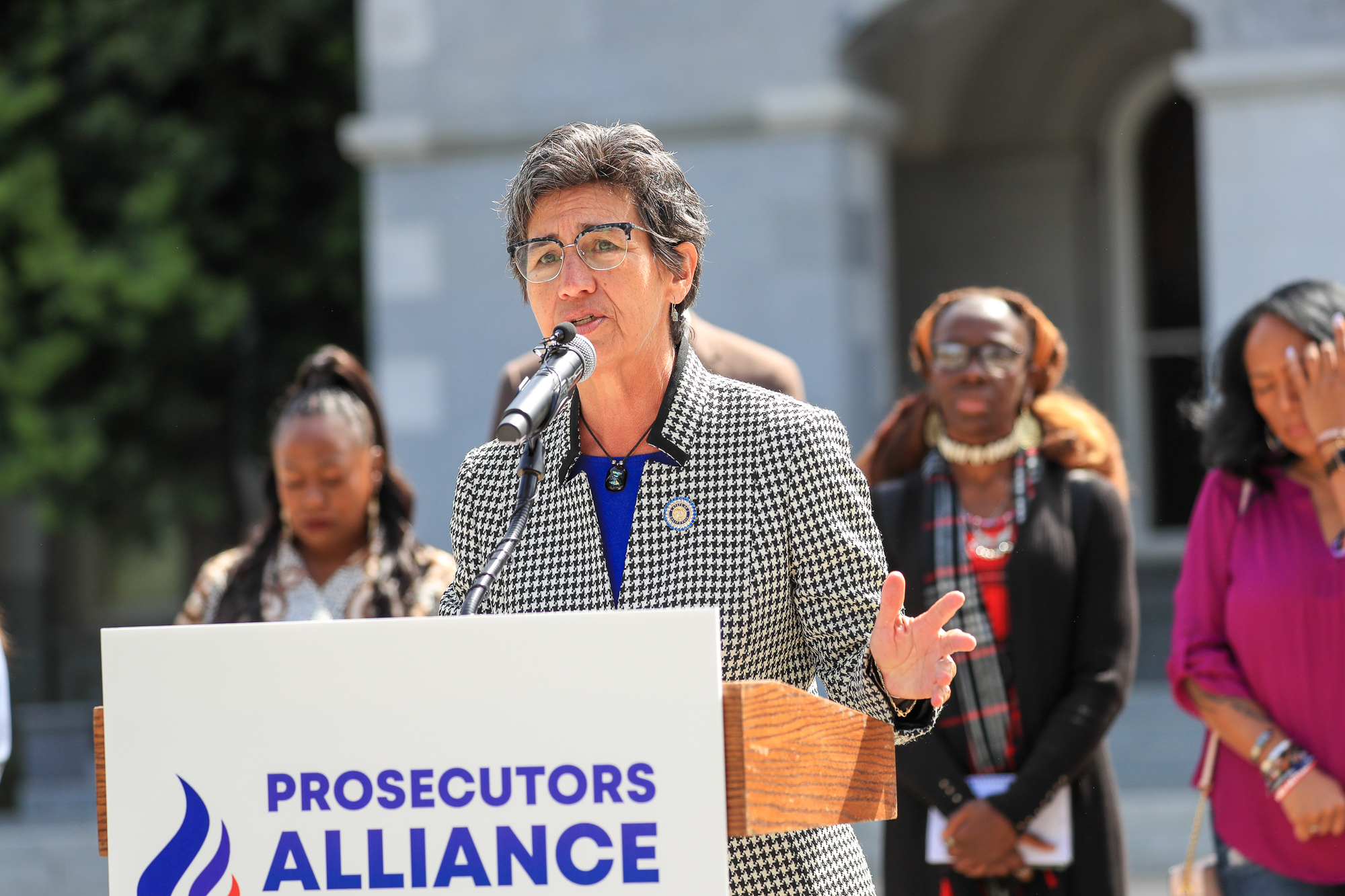 Senator Eggman explained that they introduced SB 1003 which provides the Department of Public Health with funding to “to actually train people how to do trauma informed work” for first responders who are in emergency rooms and are often the first point of contact for survivors of crime.

She said, “They should have more information about how actually to not retraumatize people when they’re oftentimes at their most vulnerable moment reaching out for help.”  Her goal is help victims “so they aren’t traumatized by the very help that we are trying to provide.” Senator Scott Wiener said, “It is so important in our criminal justice system, if we really want true public safety, then survivors need to feel safe coming forward and they need to know that they’re going to be treated with dignity and with respect and that they will be heard.”

Senator Wiener mentioned SB 1227 is “to make sure that sexual assault survivors understand that if they come forward, they are not themselves going to be revictimized.”  He noted as they saw recently in San Francisco, “rape kit DNA was used to identify and arrest a survivor of sexual assault.  Going to the hospital to provide a rape kit can be very, very traumatic for people.”

He explained “the last thing we want to do is send a message to sexual assault survivors that if you are going through that you’re assaulted. And then you go to the hospital, provide a rape kit. We want them to understand that that is not ever going to be used against them.” 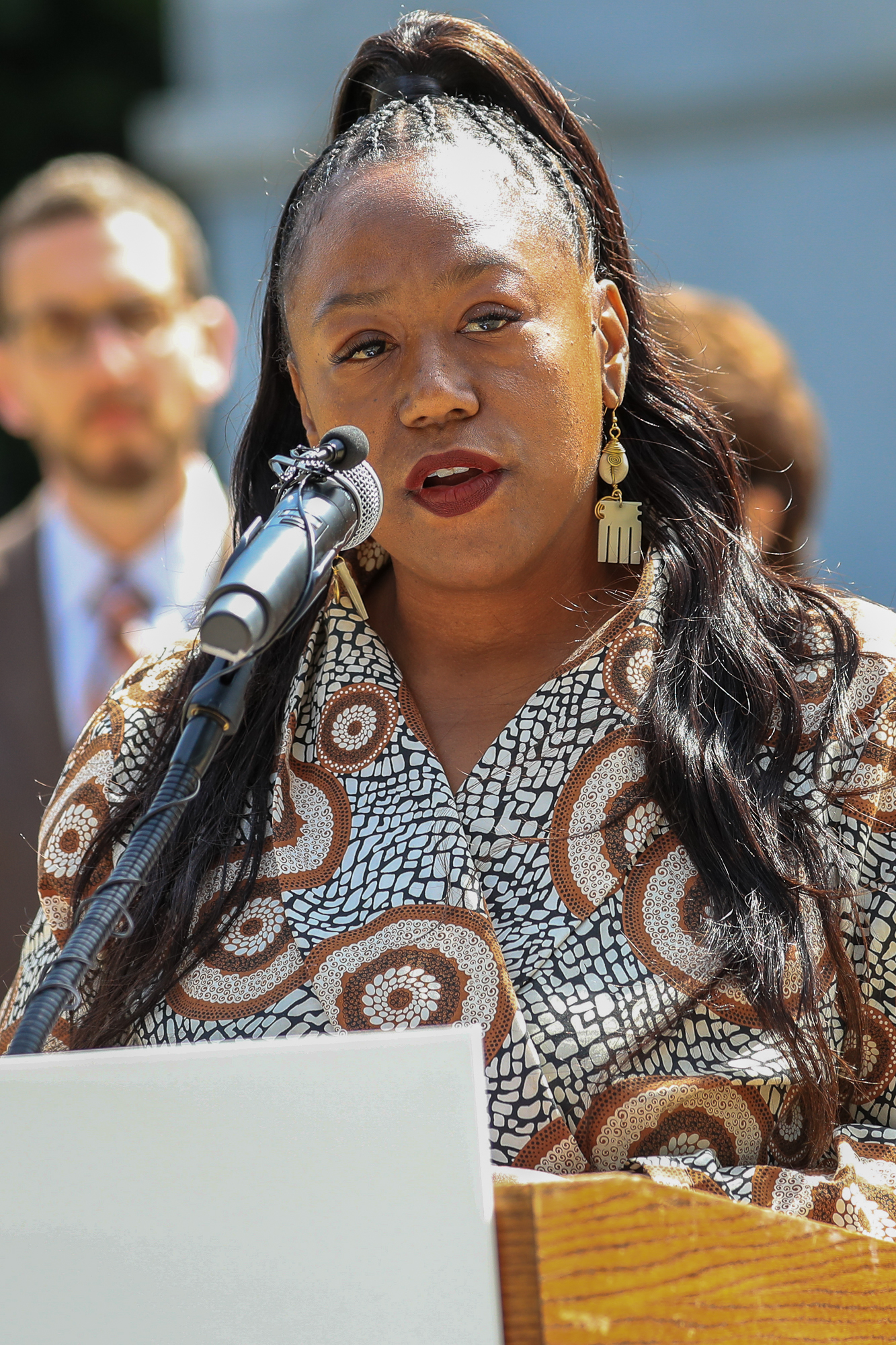 Tinisch Hollins, after the proceedings were interrupted by heckling, said, “It’s not easy to be in a space where there’s so much political tension, and we understand that people have a lot of passions about the issues that affect our lives. And that’s the reason why I am here as a survivor and a leader of an organization and a network of survivors here in the state of California who have been calling to make the path easier for healing in the state.”

She noted that the report “really highlights the lack of support that victims have in the state of California.  She said, “It’s consistent with the findings that we’ve seen, where there are huge gaps in the types of service that we need to see happen.”

Her brother, Augustine Morales was shot and killed by a Sacramento Police Officer in 2020, and her mother Roxanne Morales and their family have been fighting for justice. 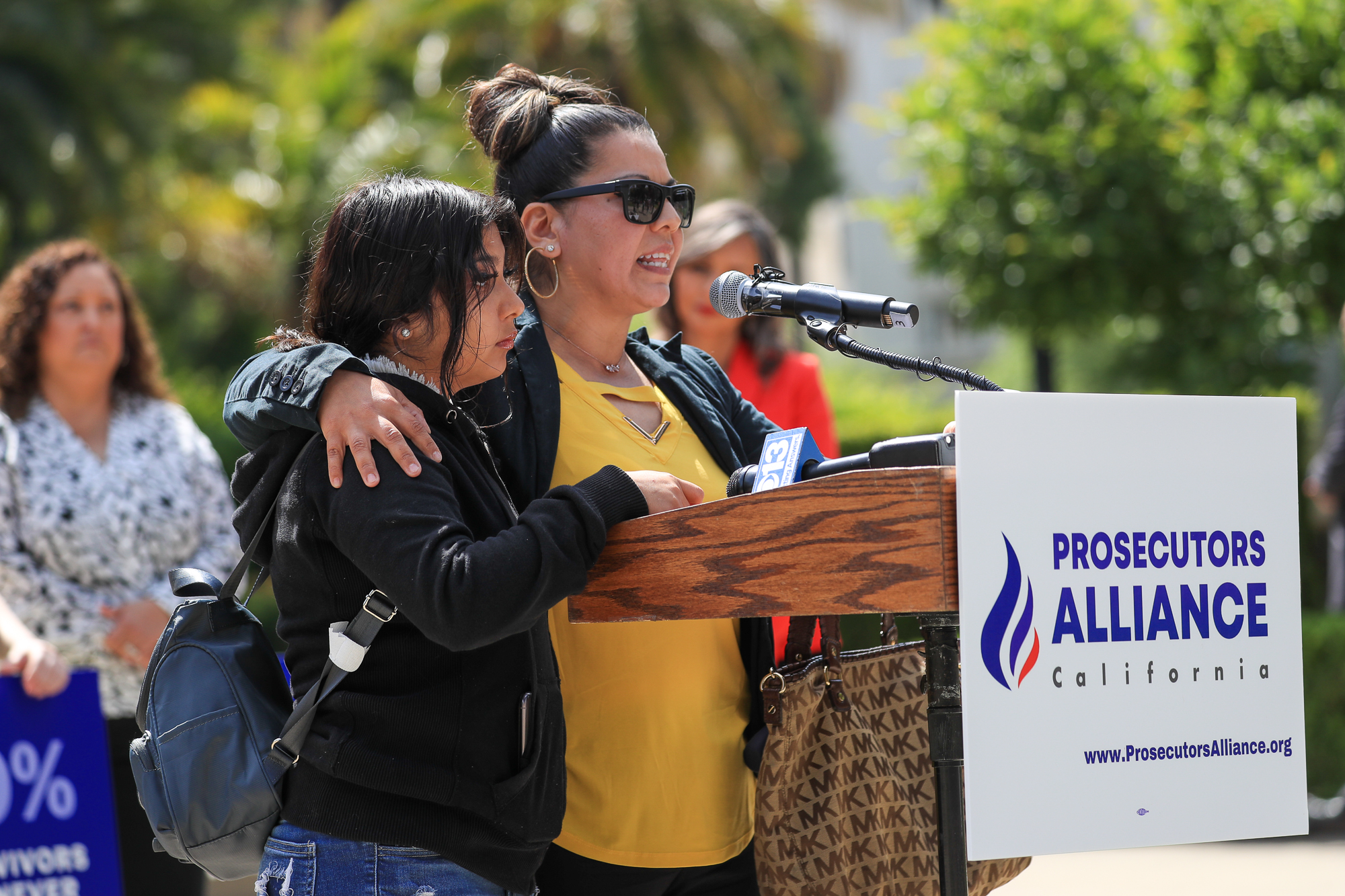 Morales continued, “We need specialized counseling services with no exclusion date, because many of the families that have lost of loved ones due to police lethal force are still suffering from trauma. Our trauma does not go away. If anything, it gets worse.” 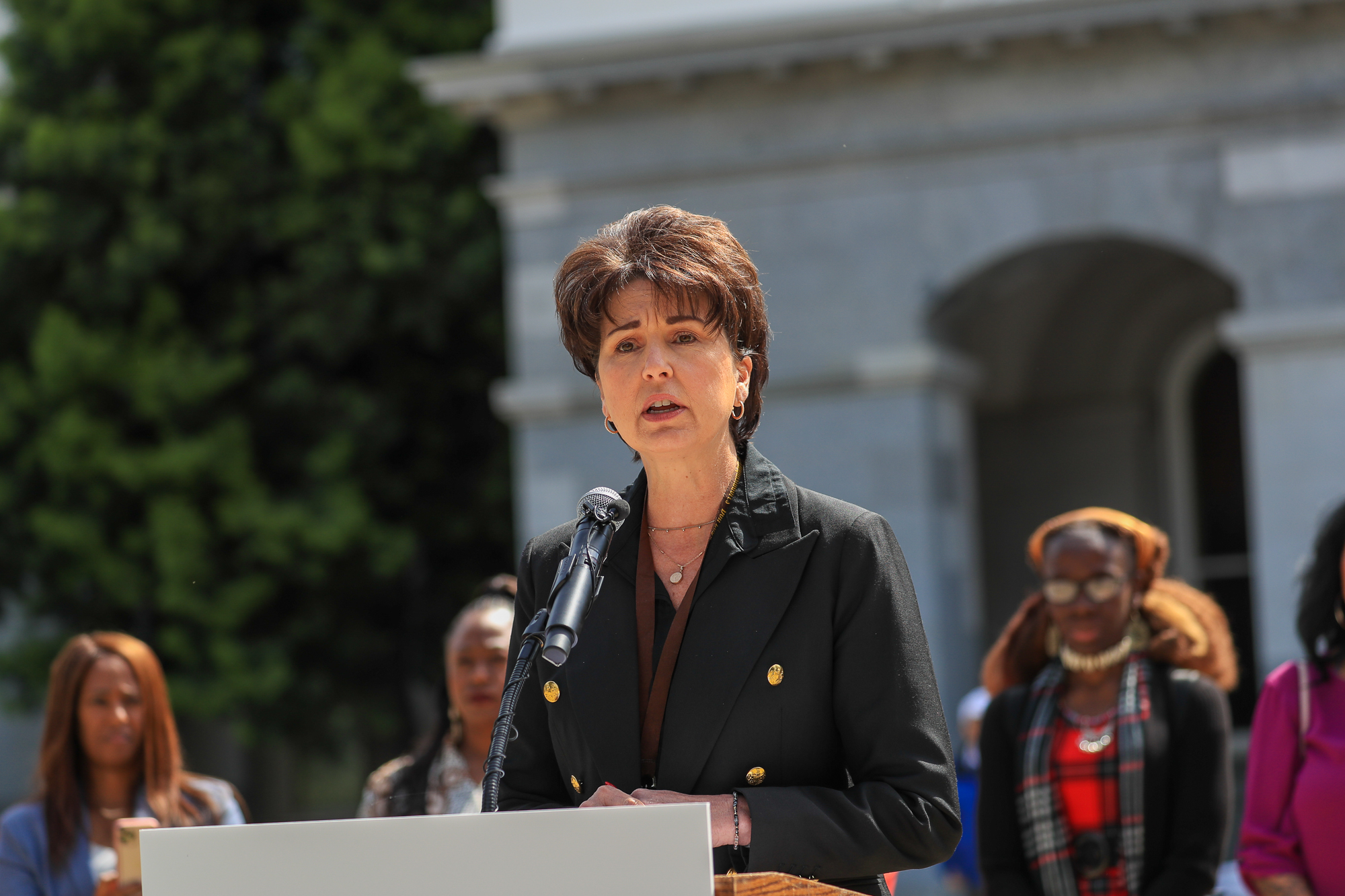 Senator Connie Leyva said, “As a Senator who has authored several bills related to authorizing and prioritizing the needs of victims, I firmly believe that we need to listen to them and do better to meet their needs.”

Survivors surveyed also wanted access to needed resources for healing and recovery, regardless of who or how they were harmed. Thirty percent of participants discussed barriers for them or family members due to probation, parole status or those who had experienced violence at the hands of law enforcement.

That is why Senator Leyva is supporting SB 299: “One of the most significant problems expressed by victims in this report are the challenges that the victim’s compensation program, particularly the Cal VCB and barriers that they face to being made financially whole, after they experience violence.”

What they found is that there are major categories of victims who have been unable to receive compensation, including those who have experienced violence or the loss of a loved one at the hands of law enforcement.

Senator Leyva said, “A victim of police violence is just as deserving and as much a victim as anyone else, and certainly deserves access to Cal VCB.” 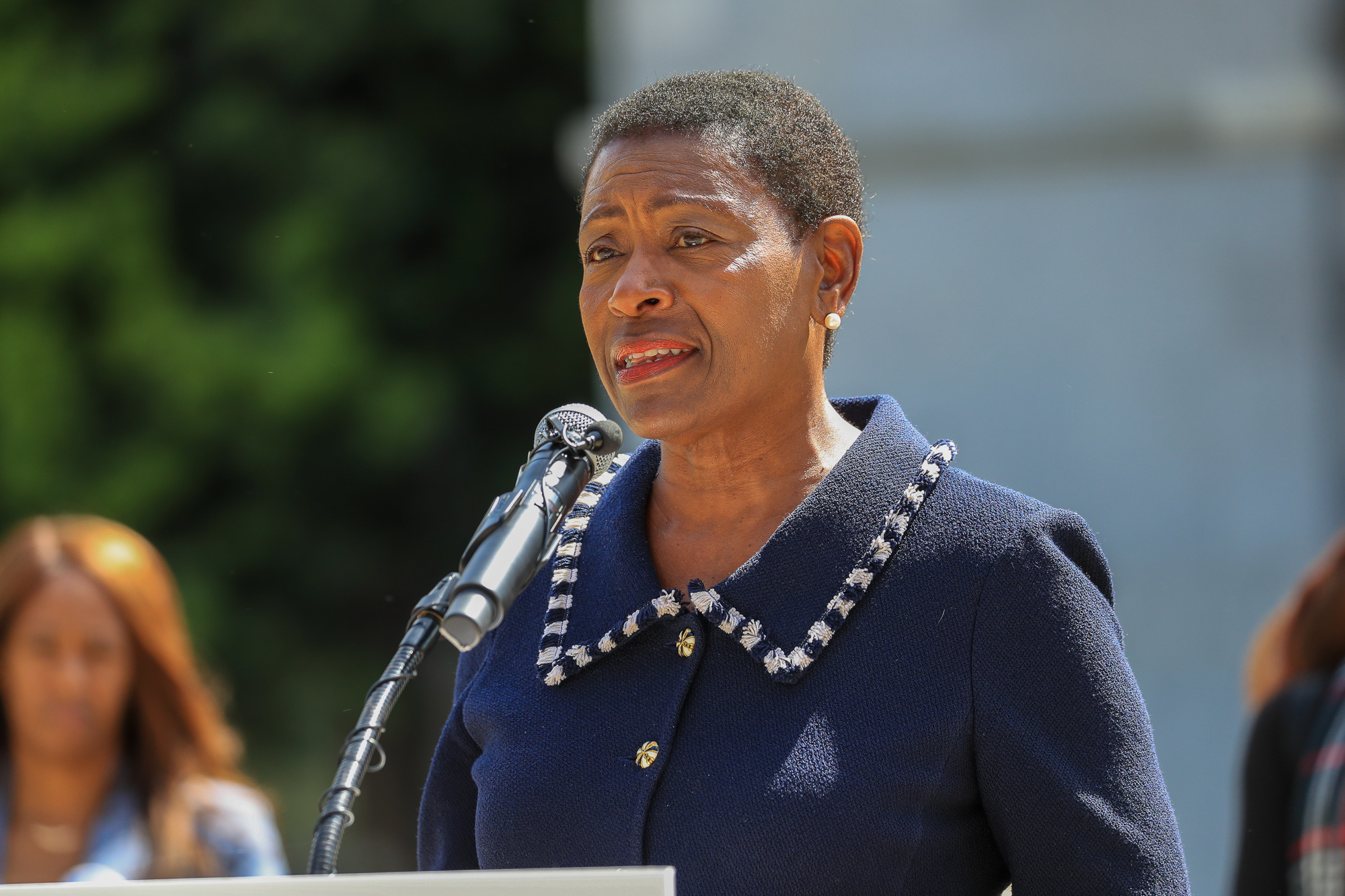 Jennifer Redmond explained that her daughter, 19, was murdered in Sacramento in September 2020. 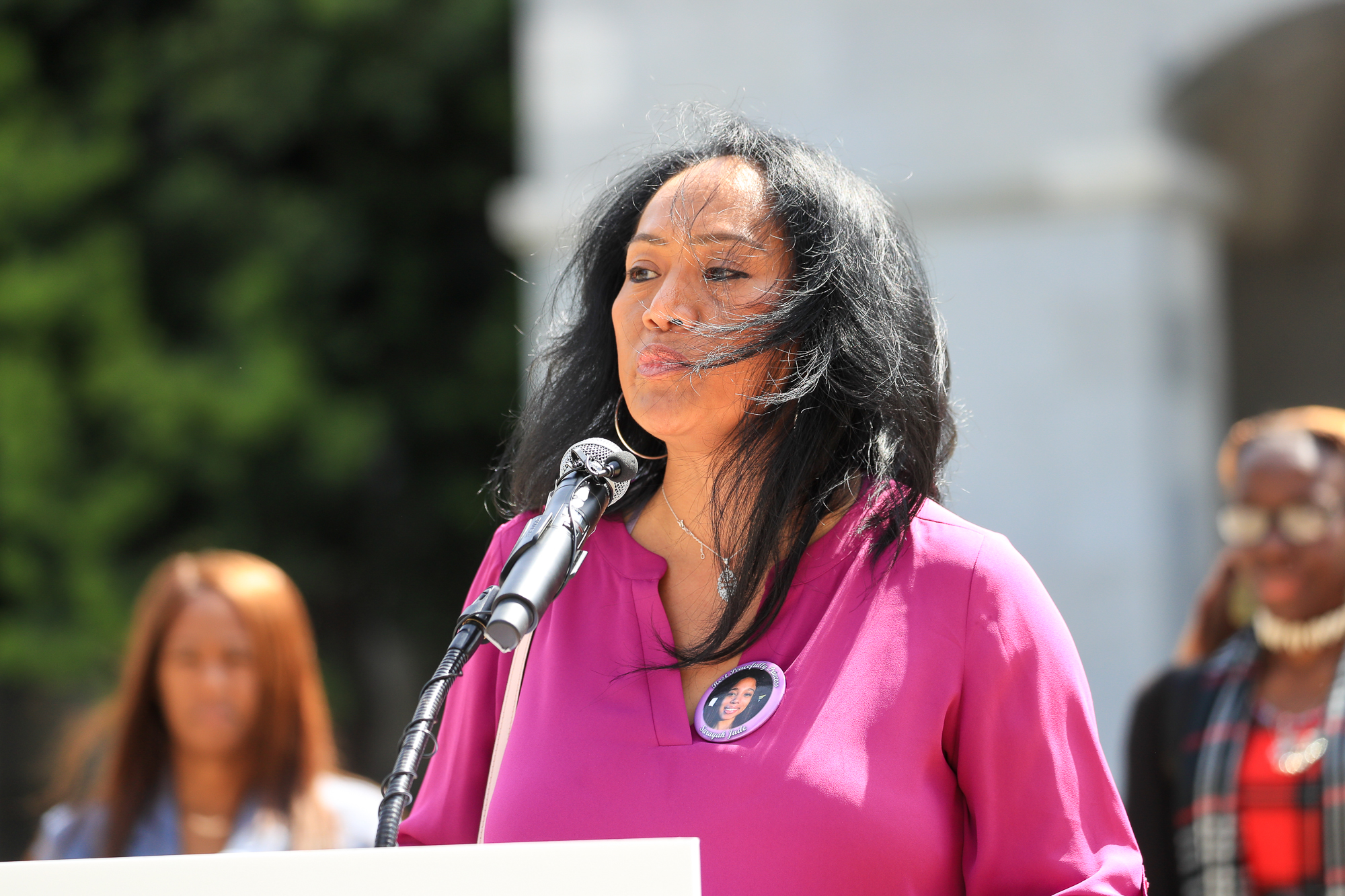 “They know who killed my daughter. They saw their faces and they’re keeping silent.” She said.

Redmond added, “We do need counseling, but it’s hard when we’re giving counselors names and numbers and you can’t leave a voice message because their number, their voice line is full. They don’t return a call or an email.”

She said, “My daughter’s not coming back. This is the life I’m forced to live now.”

Eliana (not her real name) said that she was “a bit emotional, because I just got triggered out here with a lot of yelling and screaming, unnecessarily.”

She said, “I’m a survivor of domestic violence, sexual assault, intimate partner of violence, because I was engaged in this person and human trafficking.”  She said, “I was retraumatized and had sexual assault happen by somebody I knew.” 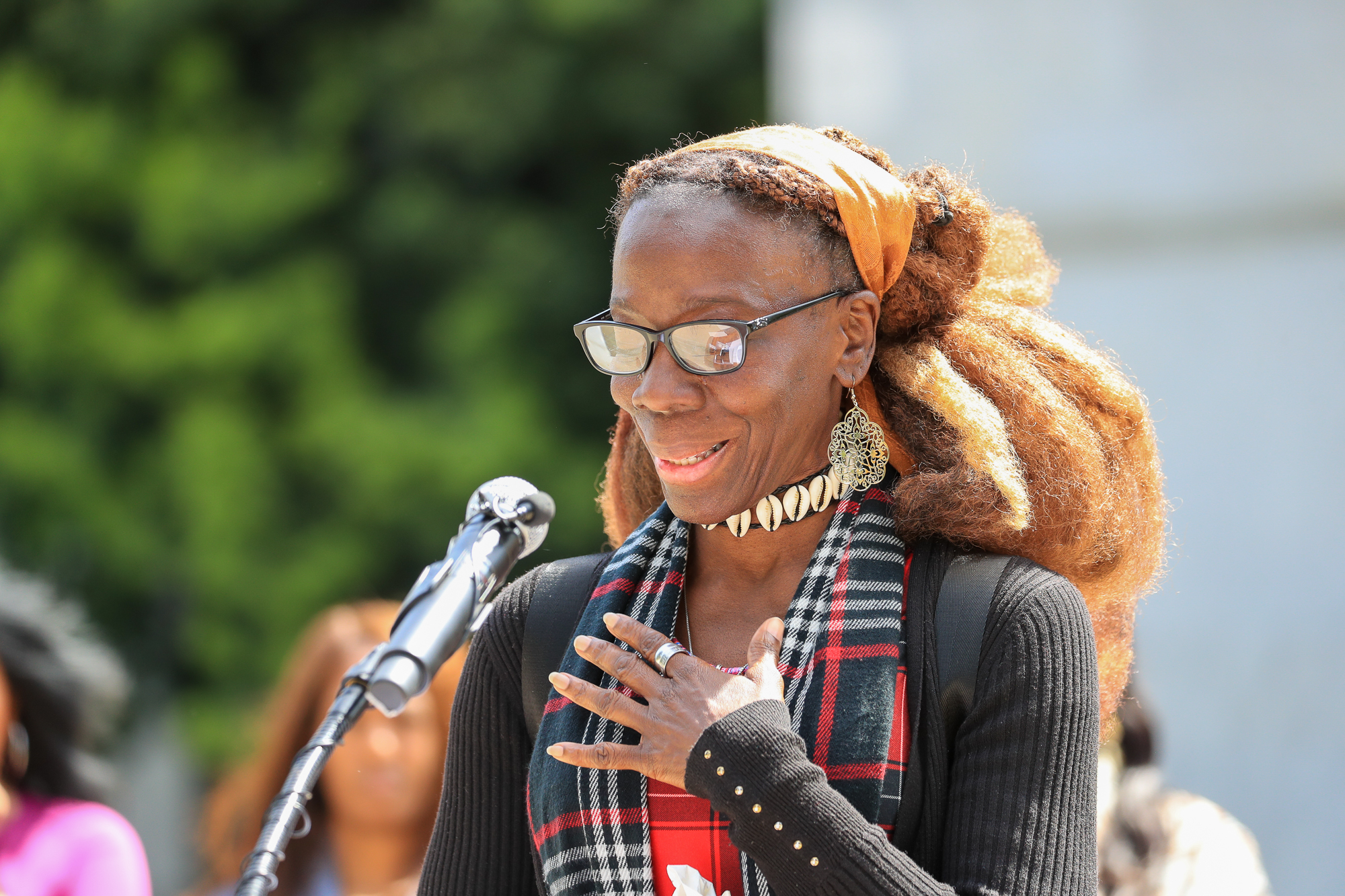 She explained, “Unfortunately, I’m still living in (such) an environment because I haven’t been relocated.”

She explained that she got severely depressed, tried to commit suicide again, and a lot of the family ended up splitting apart because they know this person.

She said, “It’s sad to have to live like this and that there is no justice at all for any age—I’m 61 years old.  And I should have never been through this again ever in my life. But I see it has no age or faith or color or anything. It happens to everybody.” 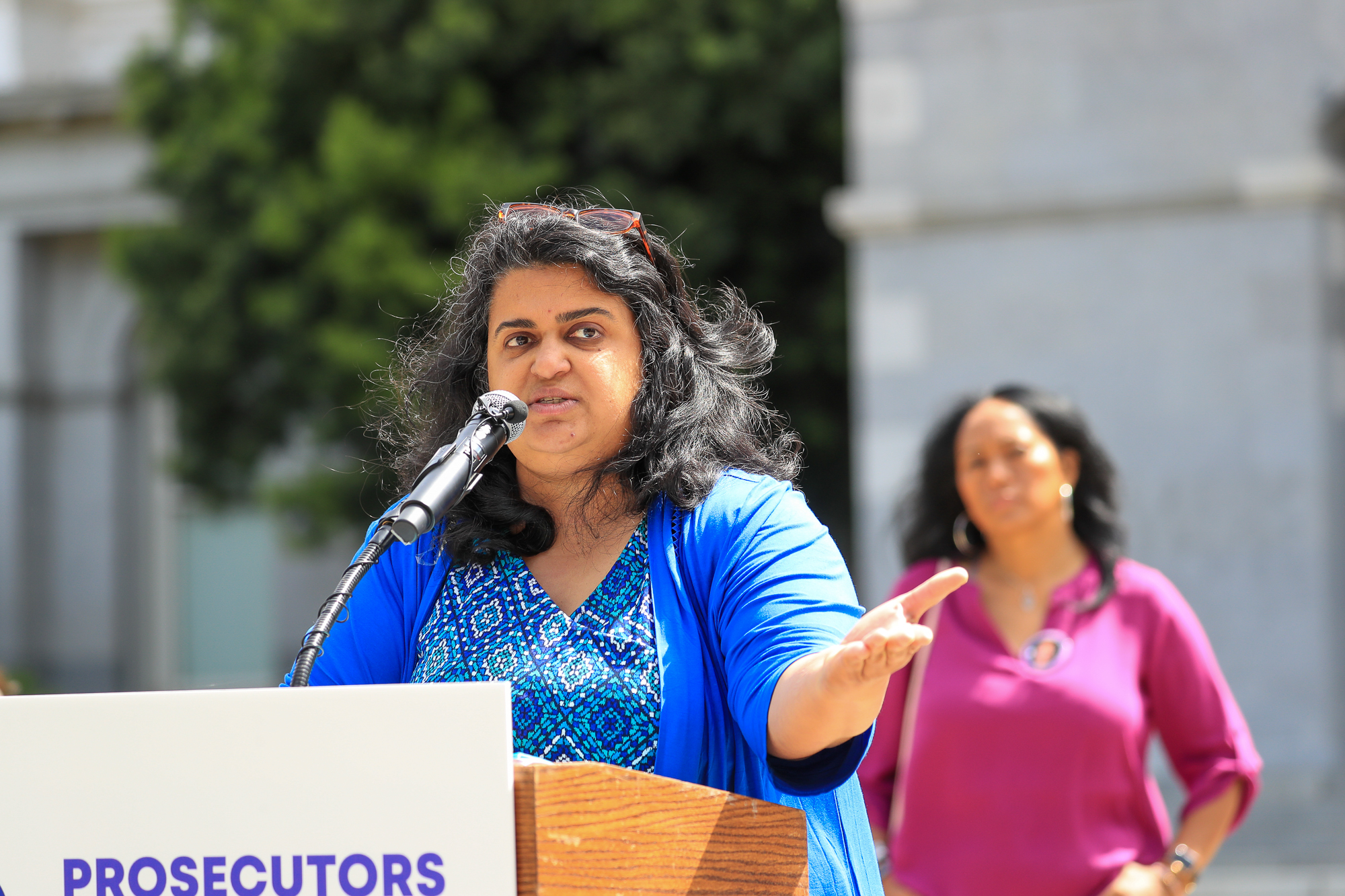 The last speaker is now an attorney, but also a victim of intimate partner violence.

She explained, “I think about courage every day in my work and my personal life.”

She said that “what I’ve realized is courage takes an obstacle. You cannot exercise courage if you are a spoiled rich kid with nothing, no obstacles in your life and everything is given to you on a silver platter, or If you have all of your basic needs met, you typically don’t have to develop courage.”

She said, “I had to witness and experience thousands of assaults as a child.”

She said that we need 24/7 access to the criminal justice system.  She explained that “when I showed up to the family courthouse in Sacramento, do you know how many times that courthouse was closed? And there was no drop box for me to drop off my draft papers because like criminals only work from business hours, right?”

Some counties accept restraining order petition via email, but places like Sacramento, she said, “need to start using basic technologies like email and scanning to start making their courthouse doors open to people who absolutely need them.”

A key finding of the survey was that restitution is fundamentally not working for  survivors. While 66% of respondents said restitution was ordered, respondents reported  that payments were slow and unpredictable, and many never received enough to make  them whole from their financial losses. That reality resulted in one of the survivor  recommendations being to reform restitution such that survivors are paid upfront regardless of an offender’s capacity to pay.

“Survivors of crime need trauma-informed care, and they need these services to be  available when they need it most,” said Los Angeles District Attorney George Gascón. “This report shows us that the work we have started doing here in Los Angeles County is truly the way to advance public safety, and we do that by prioritizing healing, addressing trauma and preventing victimization in the future.

“The criminal justice system has often treated victims like pieces of evidence and  overlooked their needs,” said San Francisco District Attorney Chesa Boudin. “Our office is dedicated to centering victims through new programs and approaches.  This report speaks to the urgent need for all of us in the criminal justice system to better support victims through trauma-informed, culturally-competent services.”