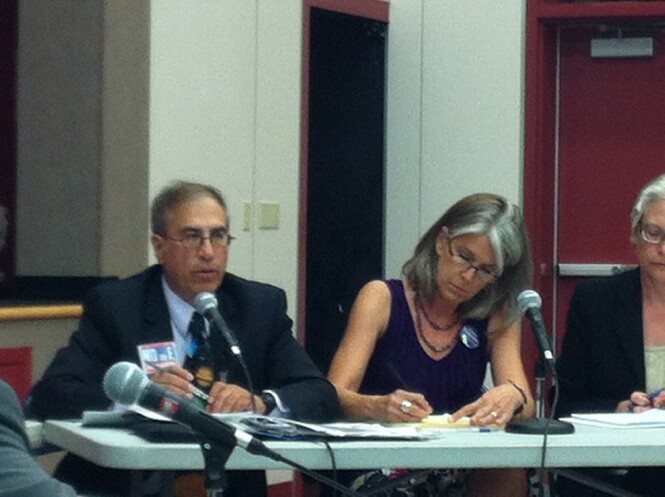 Yesterday, we covered the candidates questions to each other, and we have also posted video of the event filmed by Davis Media Access.

Here, we highlight discussion of two critical fiscal issues.  Our question on Measure E asks the candidates to “Please discuss the fairness of Measure E’s system of taxing different groups of people different amounts, while delivering everyone the exact same product, the education of the community’s children.” An audience question is, “Assuming financial calamity happens after the November election, how would you prefer to see the required financial cuts levied? Please cite specific examples.”

Alan Fernandes, a supporter of Measure E, responded that the fairness of the measure lies in what the make-up of this community is.  In order to make decisions as a governmental body, you have to assess the values and goals of the community.  He said, “I think Measure E, the various parcel amounts that you described, are a reflection of our community’s relative buy-in or support for our schools and yet an acknowledgement that everyone’s different and their circumstances are different.”  He said he thinks Measure E is fair.  He said, Measure E provides the education that we all want in this community.

Claire Sherman said that most tax measures have differential pay structure. “I think what Measure E is about is the community coming together and saying we’re not comfortable with the cuts of the programs that would occur if this measure didn’t pass.”  She said that many people come to live in Davis because of the quality of the schools and Measure E fills in a hole for the loss of state funding.

Jose Granda said he is campaigning against Measure E because Measure E is an unfair new tax.  He argued that some people get to vote so that others pay.  “That’s not the American way,” he said.  “The American Way is to treat everybody equally, and if Measure E allows seniors to be able to vote yes but not pay the taxes, something is wrong with it.  I think it is giving them an incentive so that others pay.”  He also complained about people being able to send their kids to Davis schools from out of town but not having to pay the parcel tax.  Mr. Granda argued it was misleading to call this a renewal when in fact it has the potential to double the cost, noting that not only could it increase the amount but it also more than doubles the duration of the tax.

Nancy Peterson defended the arrangement.  She said, “I think this is an example of where the board worked in cooperation with the community to develop a plan that would pass.”  She was referring to the $20 cost for apartment dwellers which she said, “was an agreement with the apartment owners” because, as she noted the residents do not pay the $20 but rather the owners do.  A lot of students rent and “their buy in to our schools is not as heavy.”  She also distinguished between the renewal of Measure A and the contingency should the governor’s tax measure, Proposition 30, not pass next month.  “Seniors have done their job, they worked and now they have limited income and I don’t think it would fair to tax them if they don’t have the ability to pay because of their limited income.  They have the option to pay if they would like, if they take that, that’s great.”  She also responded to the intra-district transfer issue noting that the district is lucky that we have 442 students transferring in for which the district gets ADA money but there is no way to tax people who live outside of the district.  She said, “These work out in the end.”

Susan Lovenburg noted that the board is restricted by state law as to how they can levy taxes.  Proposition 13 limits taxes to taxes on property.  She also noted that the law requires a two-thirds vote for approval, which she noted, this community has given each of the recent parcel taxes.  “Since 1984, there has not been a single parcel tax that has failed in the district,” she said.  She said the district looks at the programs that need to be funded and what the costs will be in order to calculate what the district asks for.  She added, “we have made some adjustments to accommodate those people who are less able to pay.”  Seniors can opt out of paying the tax, but they have to opt out and many end up paying the tax anyway.

Susan Lovenburg, for this one, went first and noted that the school board is currently trying to figure out this very question.  She noted, “We are putting all of our energies into making sure that one or both pass so that we don’t have to face that eventuality.”  She said that her strategy remains the same and it would lean heavily on the community and the district’s supporting foundations which have raised millions for the schools, additional parcel taxes.  She said, “We depend on our employees to help us in the form of concessions which would come with furlough days, unfortunately.”  She also said that they would have to make personnel reductions.  She said that the board will be looking at all of the options and added, “This level of cuts is just going to be devastating to the district.”  She said this is why we need to support Measure E and Proposition 30.

Alan Fernandes agreed with Susan Lovenburg, adding, “You cannot possibly discern what specific cuts you would even be eligible to vote on or do after the November Election, that simply because of the complexity of the election and the impact on the schools.”  He said he can give his philosophy, which stems from the fact that he is the parent of a very young child.  “I will always favor solutions that consider the long term health and success of our schools,” he said.  He doesn’t want to impact the largest number of students.  He will look at the system holistically.  “I will also consider what has the greatest amount of impact on our children,” he said.

Claire Sherman agrees with the previous responses.  “The fact of the matter is that everything would have to be on the table and there needs to be an assessment of where you get the best bang for your buck,” she said.  “I don’t even know where you would start without basically looking at the numbers and where things all fit because it’s all such a big puzzle. Chopping off one thing, you would have to backfill with another.”  She added, “You would have to go about these cuts as humanely as possible while ensuring the integrity of the school programs.”

Jose Granda said that, because he is the only candidate opposing Measure E, he has to think about the solution.  “I don’t see the sky falling as other people are trying to scare the voters to pass the measure.  Those who support the schools would pay the contributions regardless of Measure E.  If you really believe that the community supports you, that’s what you have to believe – that people will support you whether they have somebody at their back or they voluntarily do it,” he said.  He noted that Bruce Colby at one point suggested a 5.5% cut would get rid of this deficit.  He disagrees, and says, “5.5 is too low.”  He said we need to follow what happened at the state level and take a 10 to 15 percent cut.   In addition, he presented his plan without parcel taxes that calls for the creation of a non-profit or foundation whose task would be to find grants and other funding sources for the district.

Nancy Peterson, on the contrary, argued, “If we come down to 30 not passing and E not passing, we’re in dire straits and they’re immediate because of the trigger cuts that come from Prop 30 not passing.”  The Classified Staff have already agreed to a plan if these cuts occurred as have the administrators.  “The DTA is the one group that has sort of come to almost an impasse…  And for a trigger cut of $3 million the only place that you can immediately look at is our teaching staff.  Our staff is 84% of our budget.”  She added, “So it’s unfortunate, I don’t think that the immediate time in November we have anywhere else to go.  You can’t close a school.”  She said she is not in favor of furlough days.  “For the governor to say we can go to down 160 days in a school year it’s absolutely unconscionable.”

Speaking of closing a school, in a yes or no question, Jose Granda called the closure of Valley Oak a bad decision and opposes closing a school.  The others said they would consider it, depending on the circumstances.

The Vanguard Editorial Board thanks all five candidates for their participation in this forum and Davis Media Access for volunteering to film and broadcast this important community event.