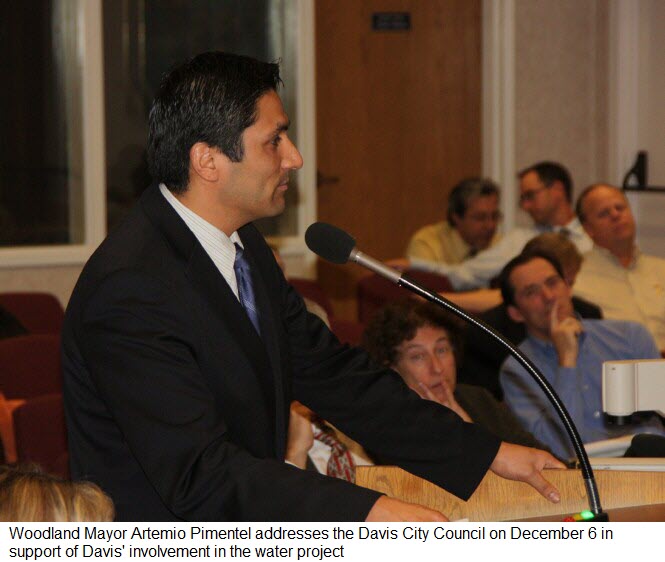 Forget the Davis City Council, the most compelling electoral battle this year will be for the 5th Supervisorial District, where two heavyweights will slug it out over the most contentious of all local issues – land use.
While Measure J has muted the issue of growth in Davis – and that issue has even been supplanted, at least temporarily, by the budget and now water – there is no such limitation on the Board of Supervisors.
Last week, Woodland Mayor Artemio Pimentel entered the race and came out firing with both guns blazing at two-term incumbent Duane Chamberlain.  Dispensing with any sense of subtlety or niceties, Mr. Pimentel went right to the point.

“I can do a better job with regard to being a supervisor that represents the 5th District,” Mayor Pimentel told the Vanguard.  “The issue for me comes down to being able to be a collaborator and an effective communicator between the city of Woodland, the rural communities and the County of Yolo.”

There has been no stronger advocate of the preservation of farmland than by Duane Chamberlain, himself a longtime farmer.  He has been an absolute stalwart against new projects that would encroach on current farm land.

However, his style has attracted criticism from some of his colleagues.  They argue that he is unwilling to compromise and they find him difficult to deal with.

Artemio Pimentel argued that he and Duane Chamberlain “would be on the same page on that particular issue,” the protection of farmland.  Mr. Pimentel told the Vanguard that he has advocated for “the protection of prime ag-land within the city of Woodland.  I will continue to push for that and that will be one of my main goals as a county supervisor.”

But it is clear that Mr. Pimentel would be less like Duane Chamberlain and Jim Provenza and more like Matt Rexroad and Mike McGowan when it comes to issues of growth and development.

This battle was set up by another battle over redistricting back in September.  At that time, a 3-2 Board Majority of Don Saylor, Matt Rexroad, and Mike McGowan approved a plan that would break up the 5th District’s as the county’s only rural-majority district.

Some at that time expressed concern that redistricting would result in the loss of commitment for Ag Preservation, as the Board shifted the traditionally rural district represented by Duane Chamberlain to a Woodland-based district.

Supervisor Provenza at the time expressed concerns that redistricting would turn the 5th District into a second Woodland District, as it now is 70% comprised of Woodland residents and 30% rural, while previously it was 40% Woodland, thus “basically turning it into an urban district.”

There’s an opportunity for a farmer or a person with a rural background to get elected,” he said. “In the new district it’s going to be extremely unlikely.”

The Vanguard asked whether this was political or just the way it happened to work.  At the time Mr. Provenza was not sure, though he noted that Woodland had wanted two supervisors, and under this configuration they should be able to get that.

“Don [Saylor] had said that you couldn’t do a rural district, because the math didn’t work for one person, one vote,” Mr. Provenza said.  “That’s not true at all because the map that I drew was the same in terms that each district had about the same number of people.  The deviation in each district from the perfect number was less than two percent on all of the proposed maps.”

Now Supervisor Chamberlain’s vote to keep the 5th District rural is being turned against him.

“He fought for Woodland to basically be broken up into three supervisorial districts when the Woodland City Council unanimously voted against it.  We wanted to have two strong members of the Board of Supervisors – he disregarded our request,” Mr. Pimentel told the Vanguard.

He also charged that Duane Chamberlain fought for basically the preservation of the current district, which he considered a move for self-preservation over democracy.  “I just don’t understand why some of the positions that he has taken have not been in the best interest of the city of Woodland,” the Mayor said.

Critics such as Dino Gay of the Woodland Record have noted Art Pimentel’s close ties to developer Paul Petrovich, who helped to develop the Gateway Projects.

He wrote, “Pimentel has consistently shown that he favors Petrovich and his development projects, both in the heart of the historic downtown and in the massive and unnecessary Gateway annexations.”

Mr. Pimentel noted that it was Mr. Chamberlain’s opposition to the Gateway projects that is one of the reasons for his candidacy against him.

“Both of those he’s opposed continuously,” Artemio Pimentel said, “I feel that that is the wrong approach especially when he’s representing such a large portion of the city of Woodland.”

He also cited Clark Pacific, which he believes has the ability to create 250-300 jobs in the City of Woodland.  According to Mr. Pimentel, Duane Chamberlain has repeatedly opposed the project.

The project, he said, has wide support, and Mr. Pimentel said further, “That’s something that I just don’t understand, where his position is coming from and why he’s taken the position of opposing job development and job opportunities for the residents of Woodland.”

One thing that should be clear right now is that the issue of growth crosses political lines.  Mr. Chamberlain, a Republican, has often been closely aligned on issues of growth with Jim Provenza, a Democrat.

Progressives who support protecting the environment and limiting growth have often joined with conservatives concerned with the impact of urban sprawl and growth, to oppose new development.

Some have already injected race and partisanship into this race.  That would be an unfortunate misread.  Mr. Pimentel came out swinging on the issue of development and Mr. Chamberlain’s alleged unwillingness to work with and compromise.

“The issue for me is effectiveness,” he said.  “Yes, you can have a county supervisor who votes against every single development and gets absolutely nothing for the rural communities and the locations where some of these projects could potentially be developed.  That is easy to do.”

“It doesn’t do anyone any good for a county supervisor to just oppose a project and not be able to work with the rest of his colleagues,” Mr. Pimentel added.  “That is going to be a big difference between Supervisor Chamberlain and myself.”

While Mr. Pimentel talked about his rural roots and the fact that his parents were farmworkers, he also angered many in the Latino Community by not coming out stronger against the shooting of farmworker Luis Gutierrez (read his May 2009 Vanguard Interview).

Mr. Pimentel did not take strong positions, either, on social services, which have been slashed badly in recent budget cuts, or on AB 109, which is the prison realignment law that the county is currently grappling with on prison expansion.

While those figure to be important issues, the line of demarcation will be on growth and development, and here we see two strong candidates who will go to war on this issue.  If nothing else, it should be fun to watch.

Share:
Previous : Supervisor Provenza Expresses Concerns About Redistricting Boundaries in the County
Next : Word To The Wise: Hospice Forum

22 thoughts on “Sunday Commentary (on a Monday): An Old Fashioned Pitch-Battle Over Growth and Land Use”